The story behind Nunavut Skulls 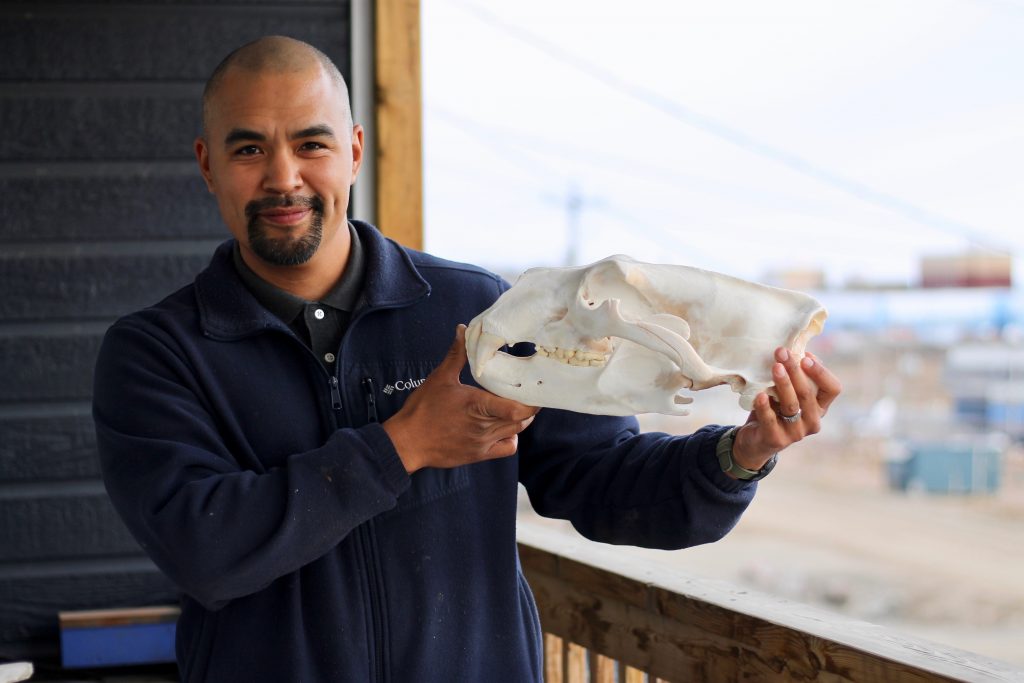 A hunter himself, Jason Sudlovenick appreciates the stories behind the skulls his customers bring in, and how they came to hold such sentimental value.

“Sometimes it’s their first hunt, or their son’s first hunt,” he says in the room off his hallway that’s become a sort of studio for cleaning and finishing animal skulls.

“I’m sure it helps, especially seeing other people field dress animals,” Sudlovenick says. “It definitely helps to know what to expect.”

Like that fleshy bit at the base of walrus tusks that has to be removed before the skull can be finished. (Cleaning a walrus skull runs at a slightly higher cost of $300 due to the size—and smell, says Sudlovenick.) 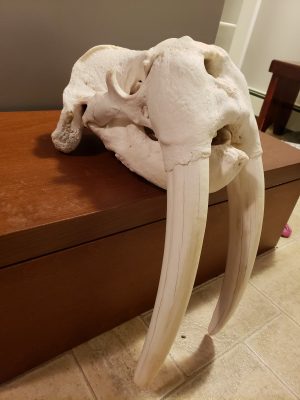 Originally from Pond Inlet, Sudlovenick moved to Iqaluit as a teenager. He first tried cleaning a couple of rabbit skulls he’d harvested a few years ago, and seeing how well they turned out, his father asked him to work on his polar bear.

More bears followed, along with the range of animals hierarchically beneath them.

In April, Sudlovenick registered his Iqaluit-based business Nunavut Skulls, through which he cleans and finishes animal skulls, so they can be hung on walls and displayed on shelves.

So far this summer, he’s been tasked with 30-plus polar bears, around 10 walrus, as well as a handful of wolverines, wolves and foxes.

Sudlovenick harvested a caribou about a month ago and the bright white product of his work now sits on a wooden table in his studio. That one took a 45-gallon drum, cut in half, to soak as much of the skull and massive antlers as possible.

Sudlovenick uses a process of maceration on skulls, meaning submerging them in water—just plain old water—at a temperature no higher than 35 degrees Celsius.

A polar bear skull Sudlovenick is preparing for a customer sits in a cooler on his deck, with an aquarium heater dropped in. (The enclosed deck is the choice spot for this part of the process, after an unfortunate first few trials that produced a smell strong enough to clear the house.)

Next, he’ll boil the skull to sterilize it, making quick work of separating any last bits of flesh.

To get a white finish on the bones, Sudlovenick turns to Clairol Basic White—yes, that Clairol—hydrogen peroxide and a thickening cream, which turns into a thick paste. He coats the soaked skull (if it’s dry, it doesn’t absorb as well) and waits for it to set.

“Every animal is different,” he says, in terms of timing and additional steps needed.

Some skulls are greasier, like a polar bear skull in his studio soaking in water and dish soap.

“Bears are generally greasy critters, so they retain some grease,” he says. “Some you can never whiten, but I recommend to clients: leave it out in the sun. It takes time.”

But the potential success is proven in his studio. The cleaned skull of one bear, which he estimates was about 5 and a half feet tall, is bright white with shining pointed teeth. (Polar bear skulls—though they range widely in size, even just among the few in his studio—cost a flat $275.) 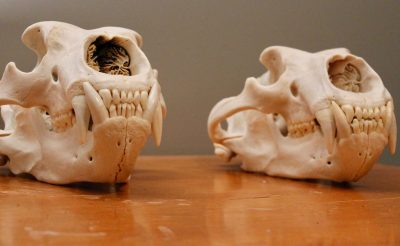 Figuring out the process of cleaning skulls has mostly come from research on the internet, and practice.

An ermine he trapped and cleaned was finished with lemon pledge, giving it a glossy look. It works on this pure white skull, he says, but on others it brings out the greasier patches.

Cleaning skulls offers a look at the makeup of animals, such as wolverines, which Sudlovenick says are easy to work with because they have such a sturdy build.

“You get to see the bone structure between predator and prey alike,” Sudlovenick says. Eventually, he’d like to work on a narwhal and beluga.

Sudlovenick has clients across Nunavut and the Northwest Territories. While some people might do this work themselves, as far as he knows, his is the only business cleaning skulls in the North. “It’s been a busy little shop this summer,” he says.