Indigenous people must enlist allies to help them heal from the ‘war’ of residential schools, says Jenny Sutherland, at Parliament Hill gathering 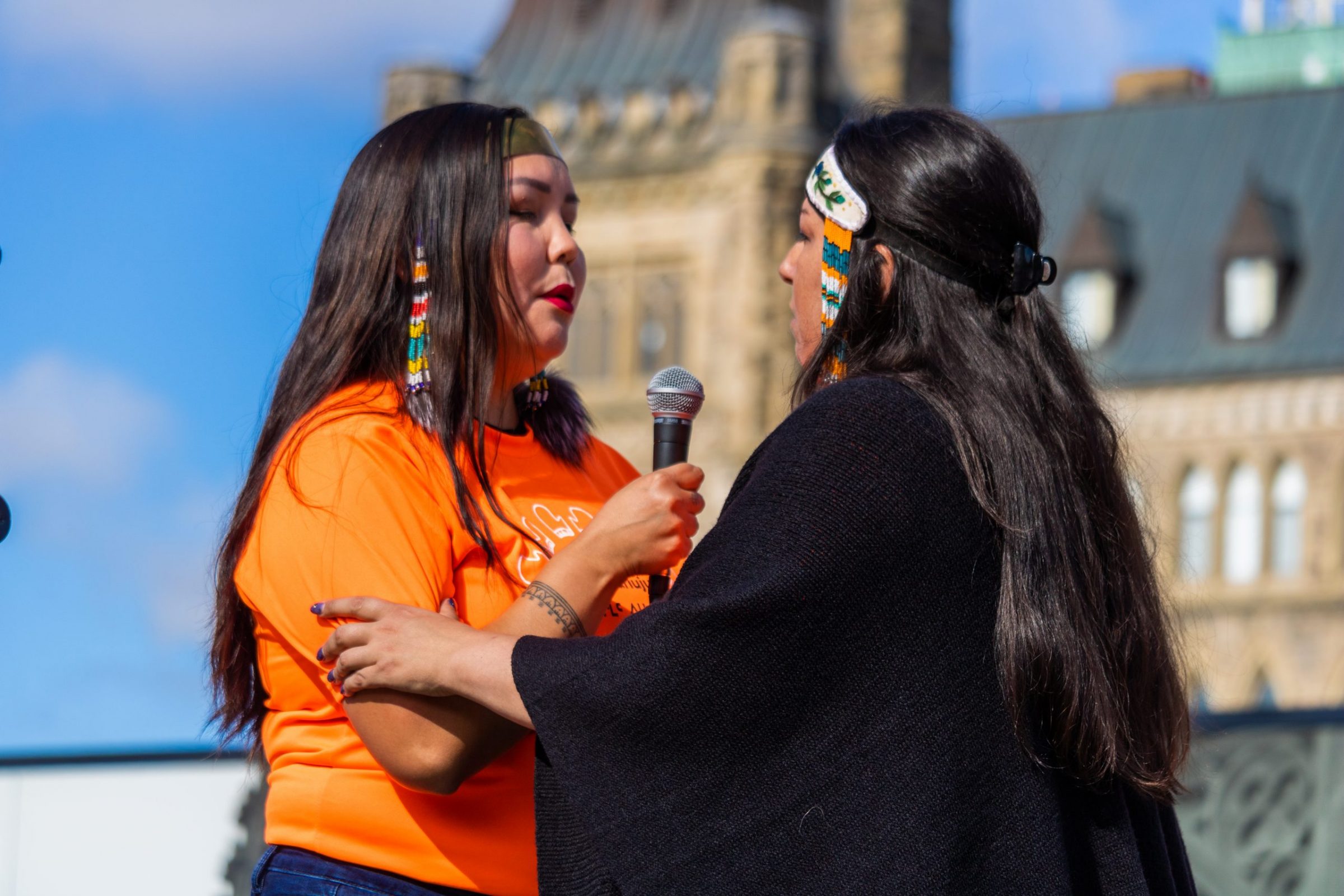 Annie Aningmiuq of Pangnirtung, left, and Kendra Tagoona of Baker Lake throat sing before a crowd that nearly covered the lawn at Parliament Hill during the opening ceremonies for the inaugural National Day for Truth and Reconciliation on Thursday. (Photo by Jeff Pelletier)

Thousands of Indigenous people and allies gathered on Parliament Hill on Thursday for a ceremony in honour of the first-ever National Day for Truth and Reconciliation.

A sea of orange shirts filled the lawn in front of the Centre Block as early as 9 a.m. to listen to stories from survivors, watch singing and drumming performances, and to quietly reflect on the lives lost in residential schools.

It marked the first time that Sept. 30 was recognized as a federal holiday since the Truth and Reconciliation Commission called for the government to create a holiday in its 94 calls to action in 2015. Parliament passed a law in June to create the new observance.

Jenny Sutherland of Moose Cree First Nation was one of the organizers and masters of ceremonies of the event at Parliament. She described the residential school system as an “act of war” against Indigenous Peoples, for which there needs to be a significant effort of remembrance.

“We want to elevate this day so it’s just as important as Remembrance Day for our veterans,” Sutherland said in an interview. “There’s been a war here, and Indigenous people need that recognized, and we need the support of the non-Indigenous community to help us with our healing.”

Commanda also used her time to share a message of unity and hope.

“No matter how much the trauma is, there is still the healing that took place, and there are still the success of our people,” she said. “We’ll walk together to turn this country into a beautiful country for all of our children.”

Between speakers, several singers and drummers took the stage.

Kendra Tagoona of Baker Lake and Annie Aningmiuq of Pangnirtung are Ottawa-based throat singers. They performed two songs, dedicating their performances to the children who did not survive residential schools.

“I’m very honoured to be here. I am the daughter of a residential school survivor and my father, Eric Tagoona, was one of the ‘Experimental Eskimos’ [three 12-year-old Inuit boys sent to Ottawa in the 1960s to live with white families],” Tagoona said. “Just really happy to be here and thinking of all the survivors and the ones we’ve lost.”

Doug George Kanentiio of the Akwesasne Mohawk nation was one of many survivors to speak. He shared his experiences of being forced to attend residential schools.

Kanentiio also used his time to demand investigations of the sites of former residential schools, and to call for prosecutions of the perpetrators of abuse and violence in the schools.

“There are still those people living who have assumed up to this point that they have escaped responsibility for what they did to us,” he said. “They have to be held criminally responsible.”

Carolyn Bennett, the federal minister of Crown–Indigenous relations, and Marc Miller, minister of Indigenous services, were both at Parliament to greet elders, despite some attendees expressing disapproval of their presence. Neither minister addressed the media, with one of their staffers saying they were only there as “participants.”

After the speeches on Parliament Hill, a group of elders led a silent march down Wellington Street and Elgin Street, finishing at Confederation Park. There, more survivors shared their stories, while attendees were able to purchase Indigenous crafts, visit kiosks and grab buffalo burger to eat from a barbecue tent.

At the end of the events, what started as a morning of solemn reflection turned into an afternoon of hope for change.

Morty, an Inuk woman from Arctic Bay who came with members of the Ontario-based organization Tungasuvvingat Inuit, was very cheerful as she left with her group.

“Starting this point, it’s very hopeful that it’s going to be passed on from generation to generation now,” she said. “I’m very proud of it.”