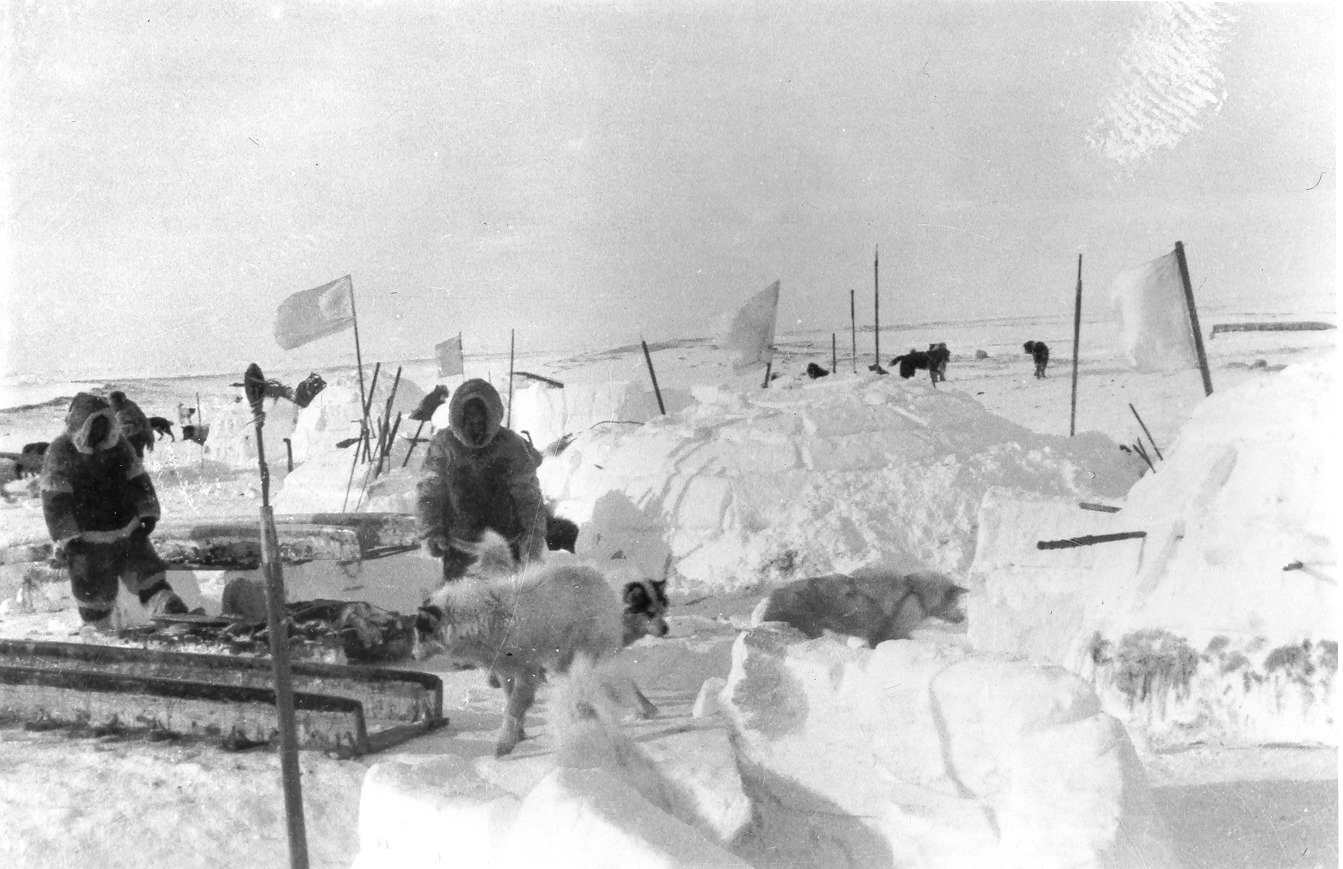 An Inuit camp during the Fifth Thule Expedition. The white flags indicate that the occupants of the snow houses have converted to Christianity. (Photo courtesy of Danish National Museum)

Knud Rasmussen was not the only participant on the Fifth Thule Expedition who did major scientific work and achieved noteworthy results. One of those accompanying him was the Danish archeologist, Therkel Mathiassen, 29 years of age when the expedition reached Danish Island. 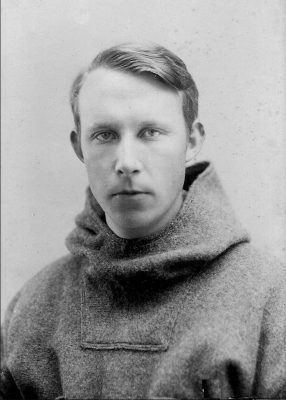 In mid-December 1922, Mathiassen and ethnologist Kaj Birket-Smith left the expedition’s headquarters for Repulse Bay where they met the Hudson’s Bay Company post manager, Capt. George Cleveland, an outrageous, bombastic man who was prone to tell tall tales and embellish his own stature in the region. The scientists were initially impressed with him. Mathiassen wrote “in rich measure [Cleveland] gave them the benefit of his knowledge of the land and its people.”

When Peter Freuchen arrived some days later, he told the Danes that Cleveland was “a damned liar,” adding, “I recognized the stories he told as the same old ones that were always used in the North to impress greenhorns.”

Mathiassen later added a quiet coda to his remarks: “Afterwards [Cleveland’s] information proved not to be wholly reliable.”

Mathiassen remained at Repulse Bay for over a month, assessing the location’s suitability for his later archeological work there.

On Feb. 2, he left with an Inuit guide, Qitdlaq, for Itibliriaq, the camp of the shaman Aua, where he would meet up again with Peter Freuchen.

From there the two would begin their first major travel, a cartographic, geological and ethnographic trip north to Baffin Island.

They left Aua’s camp on the last day of February accompanied by the Inughuit couple Arqioq and Arnannguaq and the young man Poorsimaat. Aua and his wife Orulo also accompanied them, intending to introduce them to the Inuit they would meet at Iglulik.

But Poorsimaat, Aua and his wife turned back on March 29 to accompany a group of Iglulingmiut who were southward bound to Repulse Bay to trade. Freuchen and Mathiassen reached Iglulik the following day.

After a number of days to rest and replenish their dog food, Mathiassen, the Inughuit couple and an Iglulik man, Akuano, continued on to Baffin Island.

They reached Admiralty Inlet, one of the world’s longest fjords, and Mathiassen mapped its southern part. His farthest north was just north of Moffet Inlet. Hunting proved to be terrible, and Mathiassen and his party returned to Iglulik on May 9 “without a scrap of food or dog food left.”

Mathiassen was in poor health — he had had difficulty living solely on a meat diet.

Mathiassen was not an expert at dog team travel. Freuchen, skilled at driving dogs, had instructed him and Birket-Smith in travel techniques in the fall of 1921.

But Mathiassen was never very good at it. Instead, he adopted an unusual method of travel on this and subsequent trips — he walked. He felt, moreover, that this gave him an advantage.

“He started out of a morning before the others, was over-taken at about mid-day, and reached the camp when the snow-hut was being built.”

This gave him plenty of time for detours to examine geological formations and Inuit ruins, and to collect geological and ethnographic samples. It also allowed him time to correct existing maps.

While Mathiassen had been exploring Admiralty Inlet, Peter Freuchen and an incompetent young guide had had a disastrous trip to the southwestern reaches of Brodeur Peninsula. He had returned to Iglulik a day before Mathiassen.

After regaining their strength for almost a week, the two Danes with their guides continued south to expedition headquarters at Danish Island which they reached on May 29 in a raging snowstorm.

This trip gave Mathiassen and Freuchen the opportunity to be the first outsiders to document the coming of Christianity to the Inuit of Melville Peninsula.

A prophet, Umik, had arrived with his son Nuqallaq from Pond Inlet and brought a version of Christianity that was being promulgated there by a man named Akumalik to the people of the peninsula.

Mathiassen said that the conversion happened “in a flash.”

It was easy to tell when one approached a camp of the newly minted Christians because “we saw a white rag on a pole outside the snow house and when we arrived at the place we were surprised by the inhabitants shaking hands with us; even the tiniest child had to do it.”

Whenever anyone arrived at or left a settlement, everyone gathered to sing a hymn and there was hand-shaking all round; Mathiassen commented that “even the dogs’ paws were taken.”

The prophet, Umik, was a liberal man who permitted polygamy. He offered to lend his wife to Mathiassen’s party for their stay — Mathiassen politely declined the offer.

Mathiassen thought Umik’s new religion was a fad. He predicted that its popularity would be short-lived: “If no reinforcements in the form of missionaries arrive for this new ‘religion,’ if this collection of half-digested or undigested maxims can be called a religion, it will presumably disappear just as quickly as it came when it no longer has the interest of novelty.”

Umik’s religion survived. It was a rudimentary form of Christianity. But it would be many more years before trained missionaries arrived in the district.