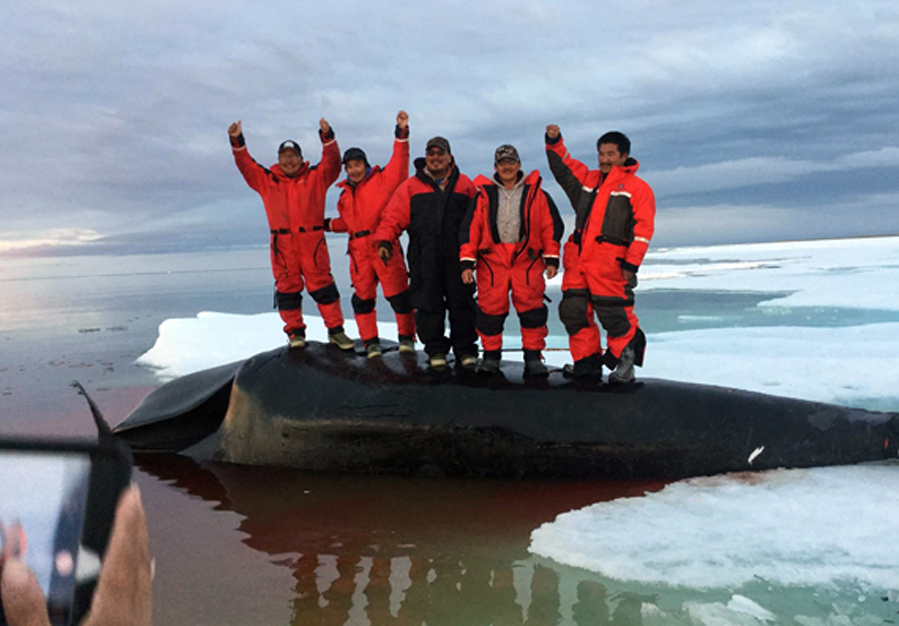 Hunters from Coral Harbour stand atop a bowhead whale caught in June 2018 just outside the Kivalliq community. (Photo by Greg Ningeocheak)

The Nunavut communities of Coral Harbour and Sanirajak plan to hold bowhead whale hunts this summer.

A third community, Qikiqtarjuaq, also received approval to hold a bowhead hunt, but has decided not to because of COVID-19 concerns, according to the Qikiqtaaluk Wildlife Board.

Since 2015, the federal Department of Fisheries and Oceans’ annual quota for bowhead whales in Nunavut has been set at five per year: two for the Kivalliq region, two for the Qikiqtani and one for the Kitikmeot.

To date, the Kitikmeot Regional Wildlife Board has not received a community request to host a bowhead hunt this summer, Fisheries and Oceans said.

And the Kivalliq Wildlife Board has only received the request from Coral Harbour.

Bowhead harvests typically occur between the end of July and the end of September.

The harvest quota of Eastern Canada-West Greenland bowhead whales is set to help conserve the animals, which are designated as a species of special concern by the Committee on the Status of Endangered Wildlife in Canada.

Correction
A previous version of this story said that the Eastern Canada-West Greenland bowhead whale population was listed as endangered under the Species at Risk Act. In fact, the population is designated as a species of special concern by the Committee on the Status of Endangered Wildlife in Canada.