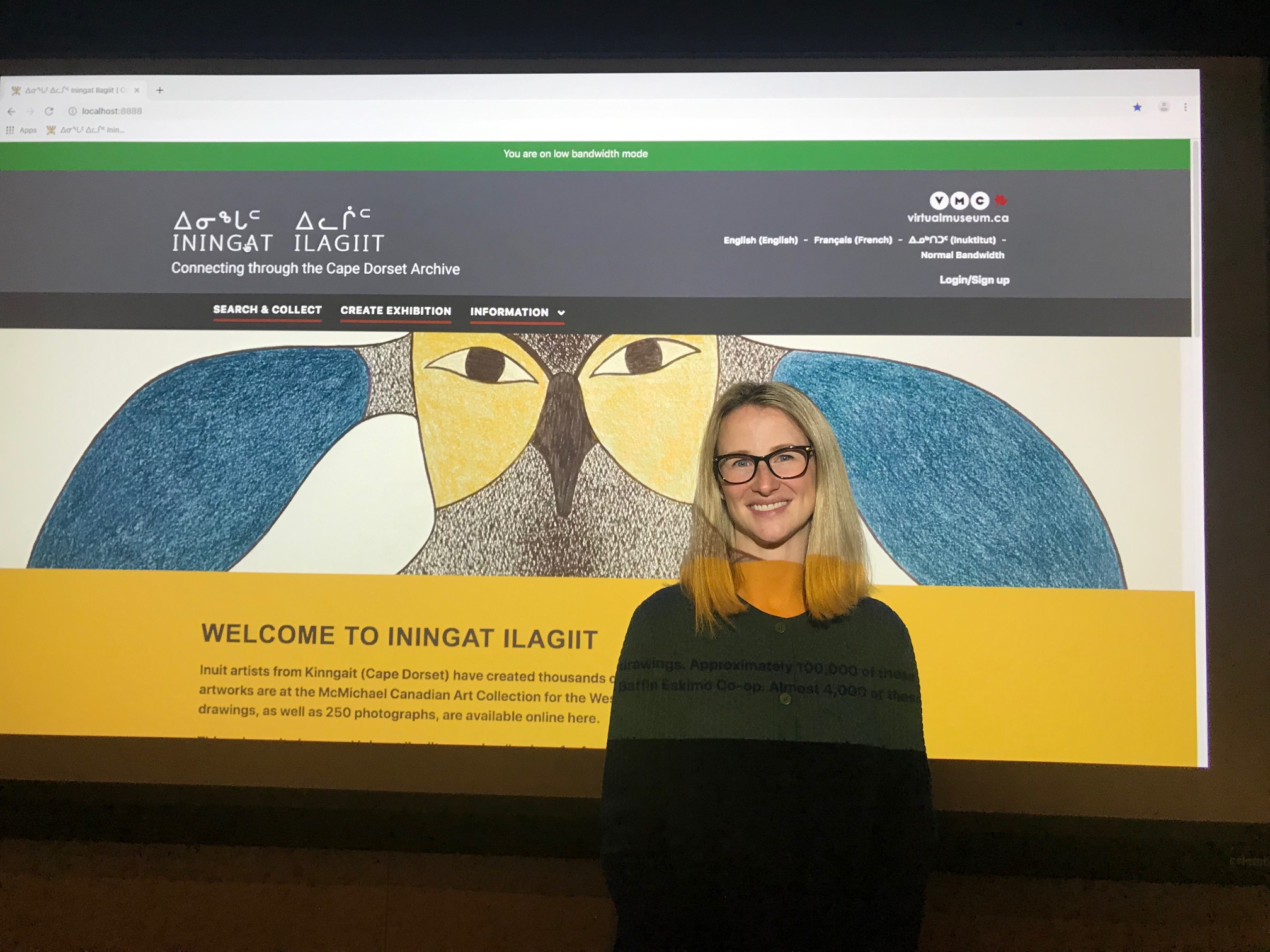 Jennifer Withrow, head of exhibitions and publications at the McMichael Canadian Art Collection, stands in front of a projection of a new website that features 100,000 drawings and prints from Cape Dorset artists. (Photo by Emma Tranter)

Artists and art enthusiasts will soon have access to a digital collection of around 100,000 Cape Dorset drawings and prints.

A project from the McMichael Canadian Art Collection, called Iningat Ilagiit, which means “a place for family,” will act as a digital gallery. It will showcase prints and drawings from the West Baffin Eskimo Co-op between 1959 and 1989.

The McMichael Canadian Art Collection has an agreement with the co-op in Cape Dorset to conserve and exhibit these works by digitizing them.

That partnership started after a fire destroyed Baker Lake’s studio in 1978. The co-op wanted to ensure its enormous catalogue of work would be preserved for the future in case of a similar disaster.

Over the years, funding for the project wavered and it was never completed.

But in 2012, the McMichael secured federal funding to continue the project.

Jennifer Withrow, the McMichael’s head of exhibitions and publications, said the website offers an “unfiltered view” of what artists were making during that time.

“Looking at the print archives from Cape Dorset over the years, you get a really interesting trajectory of the art that was being made over those decades,” Withrow said.

The McMichael has also partnered with Think2Thing, a Toronto company that does 3D printing and imaging, to digitize the work.

“Because this work just got boxed up and sent to the south, we are housing it in a dedicated vault … but there’s really no way for curators or interested folks to get to what’s in this archive unless we digitize it fully and then have a way to share that,” Withrow said.

“The goal is having this work be available, first and foremost to the community of Cape Dorset, to the artist and descendants of the works that are being digitized.”

Because the website is federally funded, it needs to meet certain accessibility requirements to qualify for the funding, Withrow said.

One of those requirements is that each work must include descriptive text that can be read by a screen reader for people who are blind or have limited vision.

This meant the McMichael would have to write descriptive text for all 100,000 prints and drawings, Withrow said.

The McMichael employed students from Cape Dorset’s high school to write the text to ensure their perspectives were included right from the beginning of the site content development, Withrow said.

They conducted two three-week workshops with the students to create the text. The workshops were done after school hours and the youth were paid for their work, Withrow said.

“The answer to this challenge also helps us meet one of our biggest goals, which is building long-term relationships with people in the North and with young people, who are in many cases descendants of the artists whose work is on the site,” she said.

The youth were given training on how to write descriptive text and used a template to create it.

They also played games to create the text, Withrow said.

Withrow said they will return to Cape Dorset to conduct more of these workshops in the future.

The website will be available in Inuktitut, English and French, Withrow said. It will also have a low-bandwidth option.

It will also include photos of the artists.