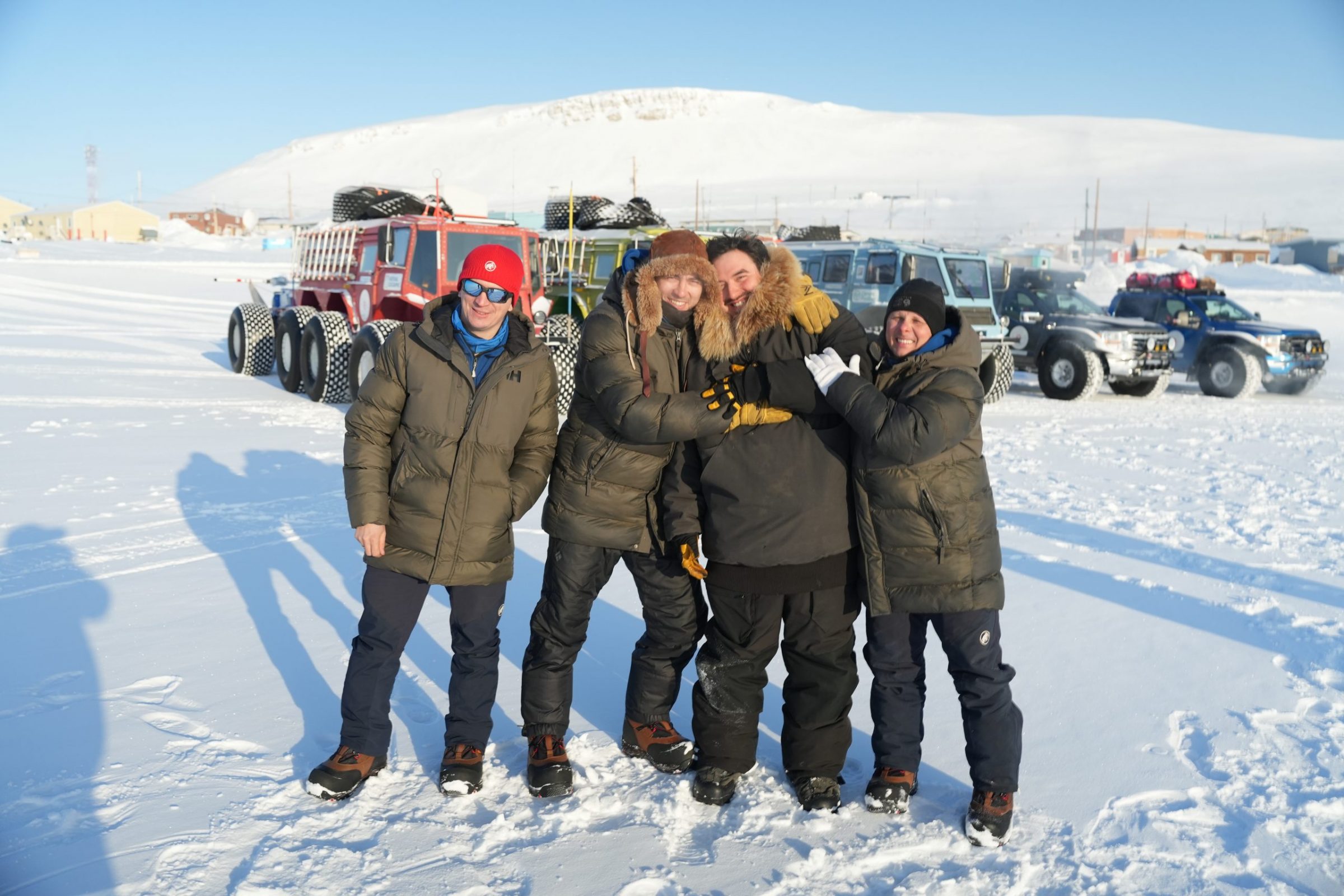 It was bestowed upon him by elders in Cambridge Bay after he and his teammates — members of the Transglobal Car Expedition — arrived in the hamlet on March 16. Their route took them over tundra and packed sea ice, in a fleet of Ford F-150 pickup trucks and Yemelya amphibious vehicles.

“We arrived at 9 p.m. in zero visibility so the only people who met us was the guide and fixer, and he couldn’t even find us for a while,” said Comrie-Picard, a professional driver originally from Edmonton, who now lives in California. 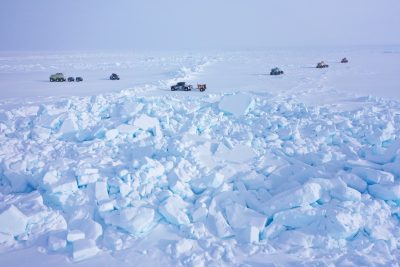 “People said, ‘Can you see the lights of Cam Bay,’ and we ran into it before we could see it.”

But Cambridge Bay was only the halfway point in the group’s journey, which took them from Yellowknife to Resolute Bay. They arrived on March 21.

The group, which includes an Inuit guide knowledgeable about polar bears and sea ice, faced towering ice blocks, mechanical struggles, polar bears, drifting snow powerful enough to swallow a truck — and even lost a vehicle through the sea ice.

But now the team says it has completed a world first by trekking overland from the continental shelf to the High Arctic.

This trip is a test run of what the team calls a “very difficult section” of a complete vertical circumnavigation of the globe planned for next year.

“The reason we are on this trip now is to confirm if it’s possible to drive from Yellowknife to Resolute because the rest of the route various members have already done,” Comrie-Picard said.

The 16-member team is made up of Russians, Americans, Ukrainians, Canadians and Icelanders. They provided updates during their journey in detailed Facebook posts.

“Route is amazing. Route is rough,” says one post, while the team was 45 kilometres from Resolute Bay. 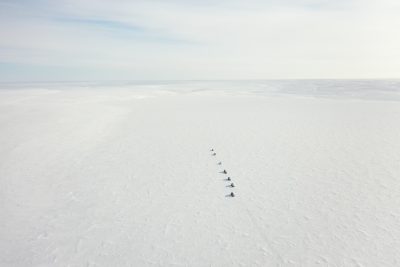 They were stopped there by mechanical issues and massive blocks of ice.

“We couldn’t see past the closest pack ice blocks (some 15 feet tall!) and despite valiant efforts at breaking them up, we had to make a principled decision and call it off for the night,” states another post.

It went through thin ice near the Tasmania Islands, in Franklin Strait, while the group was retracing its route back to Cambridge Bay, Comrie-Picard said.

Nobody was hurt, and the group had Kenn Borek Air on standby, in case a helicopter evacuation was necessary. The team plans to geolocate the submerged truck on its way back to Cambridge Bay, and eventually recover it.

Nunatsiaq News reached out to Crown-Indigenous Relations and Northern Affairs Canada, the lead agency on this case, to ask about environmental concerns posed by the sunken truck but hadn’t received a response from that department as of press time.

Comrie-Picard said one of the team’s goals is to feed the Indigenous ice database siku.org with data its members collected during the trip, including information about thin-ice areas like those around the Tasmania Islands.

“We are hoping that on this trip, the ice data we are collecting will be helpful to communities as the ice pack is changing so quickly,” he said.

The Transglobal Car Expedition team made international headlines in early March when a plane chartered by one of its Russian members was grounded in Yellowknife. Canada had closed its airspace days before to all Russian chartered, owned and operated aircraft, in response to Russia’s invasion of Ukraine on Feb. 24. 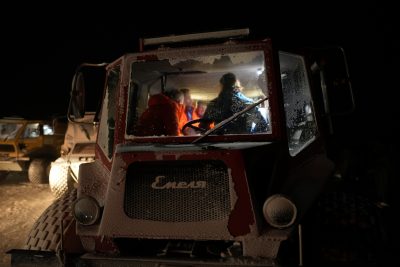 The plane was chartered by Vasily Shakhnovsky, a Russian citizen who is credited on the Transglobal Car website as initiating the expedition. He originally planned to take part in the trip, said Comrie-Picard, but that did not end up happening.

“Ironically, had he flown commercial, he would have been fine,” he said.

Comrie-Picard says the incident is a lesson learned for the team and admits its members could have announced their arrival to the N.W.T. a little better, seeing as the territory has multiple Indigenous governments and organizations interested in details of the expedition.

It’s also a consequence of the fact that this journey happens to be unfolding against a geopolitical backdrop of Russia’s invasion of Ukraine.

“There is a feeling of concern going on more than anything about their lives being disrupted and being vilified,” Comrie-Picard said about how the war is affecting expedition team members.

“Everybody in the whole world thinks Russians are bad and the truth is, they’re the best people I’ve ever worked with. Grassroots people, truck drivers and mechanics and explorers.”

But everybody on the ground is absolutely focused on the task at hand, said Comrie-Picard, which this week has been training and searching for open water outside Resolute Bay.

The team plans to leave Saturday, and if all goes well, will do it all again next year, as part of a larger journey.