Baker Lake residents asked to conserve water until then 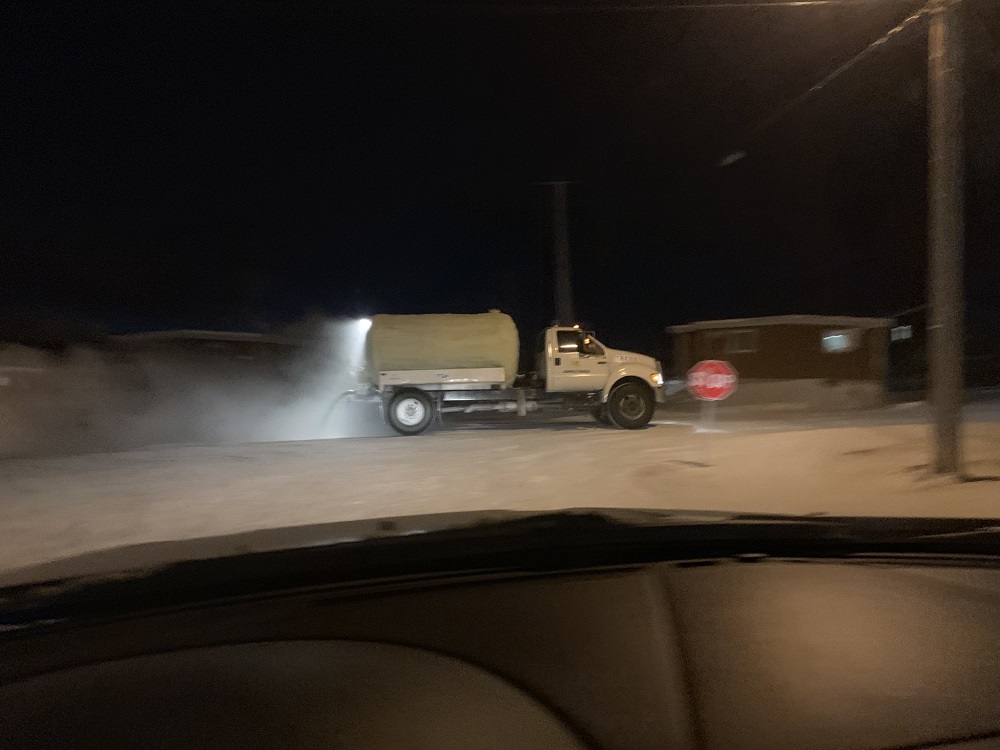 Agnico Eagle Mines Ltd. has lent the hamlet of Baker Lake use of one of the sewage trucks from its nearby Meadowbank mine, pictured here on Jan. 30. The truck is alternating two days in the community and two days at the mine site, until the hamlet can secure more trucks. (Photo by Shane Niego)

The Hamlet of Baker Lake says it’s maintaining basic services in the community of 2,000 while it waits for two new sewage trucks set to arrive from the Northwest Territories next week.

The Kivalliq hamlet’s six-bay garage was mostly destroyed in an early morning fire on Jan. 29, along with the fleet of vehicles parked inside, which included six of the hamlet’s sewage trucks and other heavy machinery.

That has left the hamlet with one sewage truck, plus a second on part-time loan from Agnico Eagle’s nearby Meadowbank mine.

Agnico Eagle has agreed to loan the vehicle to the hamlet on an alternating two-day schedule, which means the truck must make the trek to and from the community along the 100-kilometre all-weather road that links Baker Lake to the mine site.

Back down to just one truck on Feb. 1, hamlet officials reminded the community to watch its water use.

“We encourage residents to please continue conserving water and be patient,” the hamlet said in a Jan. 31 notice. “We are very close to achieving our short-term solution.”

That includes the order of two more sewage trucks and a chassis for a third vehicle from Hay River, N.W.T.

Those vehicles are expected to be transported to Yellowknife this weekend, and then flown to the Meadowbank mine site by Hercules aircraft on Feb. 4.

The assembly of those new vehicles is expected to take a few days, but the hamlet hopes to have them in operation by Feb. 7.

Some residents in the Kivalliq community are still disposing of their own sewage.

The hamlet has asked residents who are using honey buckets to double-bag this waste and place it beside—and not inside—outdoor garbage bins.

Residents should alert the hamlet when they have disposed of sewage by calling the hamlet office at 867-793-2874.

“Our community has shown great strength during this difficult period,” said Baker Lake mayor Shawn Attungala in a Jan. 31 post to social media. “We are all looking forward to having new vehicles next week.”

Nunavut’s fire marshal continues to investigate the cause of the fire and has yet to issue any public comment.

Crews were also working on Feb. 1 to remove the damaged vehicles from the burnt-out garage. The hamlet has asked residents to stay away from the area while that work is underway.

While most office buildings have re-opened since the fire, the community’s schools were closed on Feb. 1 due to extreme cold temperatures of -40 C.