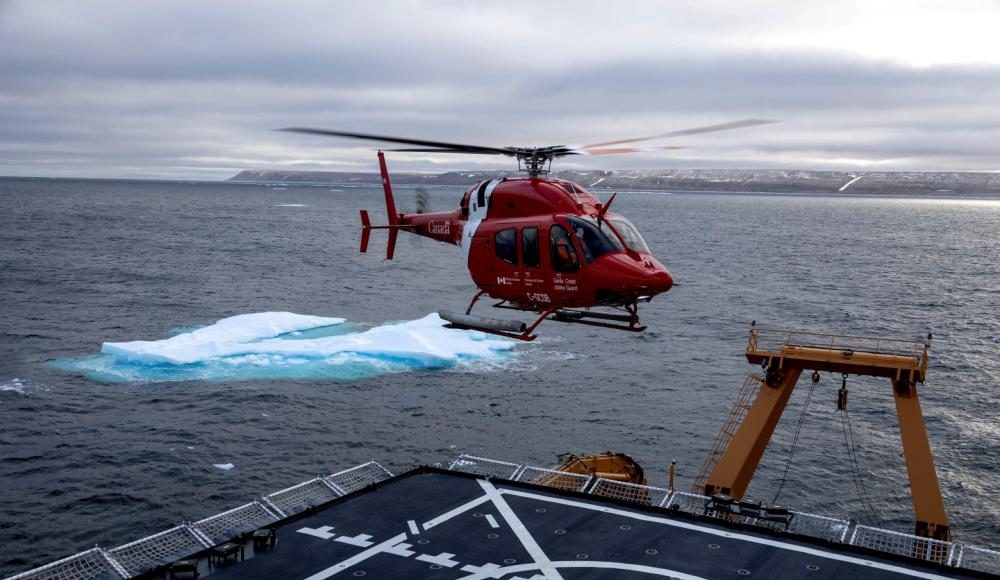 An air crew aboard a Canadian Coast Guard helicopter prepares to land aboard Healy while near Resolute, Nunavut, on Sept. 6, 2021. (Michael Underwood / U.S. Coast Guard)

The U.S. Coast Guard and Canadian forces conducted a joint Arctic search-and-rescue exercise in the Arctic on Monday.

The Canadian Coast Guard and Canadian Rangers partnered with the U.S. service on the drill, with top leaders of those services overseeing the operation near Resolute Bay, Nunavut. 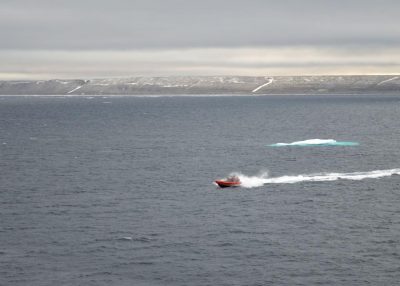 A boat cuts through the water near Resolute, Nunavut, during a joint Arctic search and rescue exercise with the Canadian Coast Guard and Canadian Rangers on Sept. 6, 2021. (Michael Martini / U.S. Coast Guard)

The U.S. Coast Guard Cutter Healy, one of two operational icebreakers in the U.S. fleet, which began a transit of the Northwest Passage late last month, was on hand for the drill as part of that voyage. (The Healy last traveled through the passage in 2005.)

Adm. Karl Schultz, commandant of the U.S. Coast Guard, helicoptered to the Healy off the coast of Resolute, and Mario Pelletier and Neil O’Rourke, commissioner and assistant commissioner of the Canadian Coast Guard, joined him aboard the ship.

Exercises such as these help Arctic nations understand how to better collaborate and prepare for fast-paced rescues in harsh conditions that may become more common as the Arctic opens to increased marine traffic from cruise ships, resource extraction companies and other sources.

“Training alongside our Canadian partners while underway in the Arctic during a historic circumnavigation of North America is a great example of enhancing our interoperability and mission capabilities,” Schultz said in a statement.

In this transit, scientists aboard Healy are mapping parts of the seafloor and aiming for a better understanding of the ways ice, land, sea and air interact, in order to understand the conditions voyagers may face in the passage.

Researchers will also gain a better understanding of the ways the Arctic is changing — and how to model and predict intersecting factors.

The oceanographic research contributes to a better understanding of the “critically important Arctic region,” Schultz said.