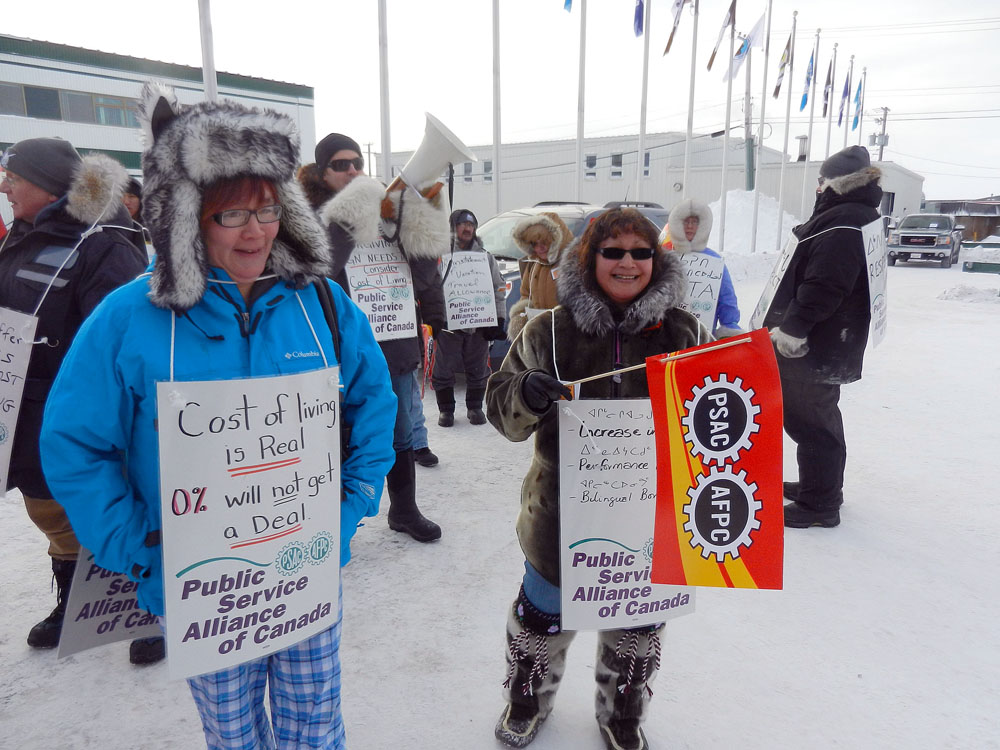 Members of the Nunavut Employees Union, a part of the Public Service Alliance of Canada, at a noon-hour demonstration held on Feb. 20, 2012, at the back of the Nunavut legislative building in Iqaluit. (File photo)

Focusing first on non-monetary items, the Government of Nunavut and its unionized workers have started talks aimed at a new collective agreement, the Nunavut Employees Union told its members earlier this month.

Their first bargaining session, held on Jan. 15 to Jan. 18, “was both positive and productive,” the union said in an update to members.

“Clearly these are the early days of bargaining, and we have yet to deal with many difficult issues. But we can all hope that the positive tenor of this first session continues into the coming sessions,” the union said.

The NEU, the labour organization that represents thousands of GN workers, as well as many employees of hamlets and local housing organizations, is a part of the Public Service Alliance of Canada.

The last GN-NEU wage-benefit deal, reached with the help of a mediator in August 2016 and signed Nov. 23 that year, expired at the end of September 2018.

To prepare for a new deal, the union chose a bargaining team last October and worked out its proposals in December after a two-day caucus.

As is normal, the two sides are concentrating on non-monetary issues and won’t likely talk about the difficult issue of money until near the end of the bargaining process.

To that end, the first talks in January focused on three non-monetary themes:

• The vulnerable state of the GN’s part-time workers

And the non-monetary proposals that the union gave the GN last month also include a long list of demands aimed at helping employees who are victims of domestic violence.

• For employees facing domestic violence, up to 10 days of paid leave to attend medical appointments, legal proceedings and other related activities, in addition to existing leave entitlements.

• An agreement that no action will be taken against an employee if their performance at work suffers due to domestic violence.

• An agreement that for workers suffering domestic violence, the employer will approve reasonable requests for job redesign, reduced work-load, job transfers to other locations or departments, changes to phone numbers, and screening of calls at work to avoid harassing phone calls.

• An agreement that information on employees experiencing domestic violence will be kept confidential and kept out of their personnel files unless the employee agrees.

• Awareness training in the workplace on domestic violence.

• An agreement that the employee will identify a human resources person who will be trained in domestic violence and privacy issues and that the employer will advertise this staff member’s name.

Also, the union proposes the recognition of a workplace “women’s advocate” who would work with women members and give them information about women’s shelters, counsellors and the employee assistance program.

To that end, the union proposes sentences like this one be added to the collective agreement:

“The Employer and the Union recognized that employees who identify as women sometimes need to discuss with another woman matters such as violence or abuse or harassment, at home or in the workplace.”

The ideas contained in the NEU’s package of non-monetary demands are proposals only, and have not been agreed to by the employer.

The next bargaining session is scheduled for Rankin Inlet, during the week of Feb. 8, the union told its members.

It’s not clear when or if the NEU’s talks with the GN will strike a new wage-benefit deal.

The two parties signed their last wage-benefit deal in late 2016, more than two years after the previous agreement had expired in 2014.

That led to retroactive payments, distributed in instalments, to cover the difference between what workers actually got paid and what they would have been paid had the agreement been in place in 2014.

Union members at the GN can find information about the collective bargaining process by following this link.