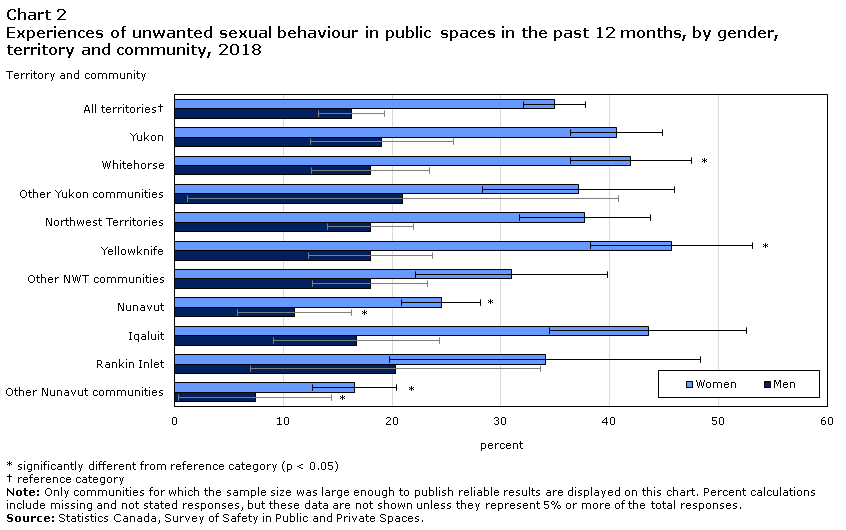 Nunavut residents reported fewer cases of unwanted sexual behaviour in public spaces than their Yukon and N.W.T counterparts in a national survey conducted by StatCan in 2018. That’s at odds with Nunavut’s sexual assault rate, which is the highest in the country. A new StatCan report offers some explanations for these puzzling results. (Image courtesy of StatCan)

Given how Nunavut leads the country with its rate of reported sexual assaults, you might expect to find similar results in a new Statistics Canada report that looks at unwanted sexual behaviour in public places.

But that’s not the case. Instead, the report, released on Aug. 26, found that women in Nunavut were less likely to experience unwanted sexual behaviour in a public space than their counterparts in Yukon or the Northwest Territories.

The report, which focuses on the three territories, draws on the results of a national survey on gender-based violence conducted in 2018. That survey collected responses from more than 2,500 residents of the territories.

The report notes that Nunavut’s sexual assault rate is nearly six times the national average. Yet the survey results show that Nunavut is the least likely territory for women to be targets of unwanted sexual behaviour in a public space.

One-quarter of women in Nunavut reported having experienced at least one unwanted sexual behaviour in a public space in 2018. That’s compared to 41 per cent of Yukon women and 38 per cent of women in the N.W.T.

The survey found similar results for men: 11 per cent of Nunavut men reported being the target of unwanted sexual behaviour, compared with 18 per cent in the N.W.T.

The report’s authors offer a few possible explanations for these results. One has to do with how Nunavut has a far more dispersed population than the N.W.T. or Yukon, with a smaller share of its population in its capital city.

Other research has found that residents of cities are more likely to report unwanted sexual behaviours in public places than those who live in smaller, more rural areas. The reason, in short, is that smaller communities have fewer public gathering places.

“They speculated that urban cores have more public spaces, with more people, higher population density and a greater degree of anonymity, which could provide more opportunities for such behaviours to occur,” the report states.

The territory’s three capital cities all report fairly similar levels of unwanted sexual behaviour. But while about 80 per cent of the Yukon’s population lives in Whitehorse, and about half of the N.W.T’s residents live in Yellowknife, fewer than 20 per cent of Nunavummiut live in Iqaluit.

But there seem to be other factors at play, because in Nunavut’s other communities, the proportion of women who reported experiencing unwanted sexual behaviours was still lower than that recorded outside the capital cities in the other territories.

The report’s authors suggest that unwanted sexual behaviour may be considered normal in Nunavut’s smaller communities, as a consequence of intergenerational trauma caused by colonization and the impacts of residential schools.

“For example, studies have noted that the history of violence resulting from colonization and residential schools may have led to some normalization of violence among Inuit women, who represent the vast majority of Nunavut women outside of Iqaluit,” the study states.

“Therefore, there could be under-reporting of some inappropriate sexual behaviours, in cases where those who experienced them may not have fully perceived their threatening or violent nature, especially in the less serious instances.”

First Nation and Métis women reported similar rates of unwanted sexual behaviour in a public space as non-Indigenous women, at around 40 per cent. Inuit women, meanwhile, were about half as likely to report these experiences.

“As mentioned earlier, some studies have highlighted a normalization of violence among some Inuit women, which could have contributed to an under-reporting of some inappropriate sexual behaviours, especially in cases where the violent or threatening nature might have been less clear,” the report states.

You can read the full report online.