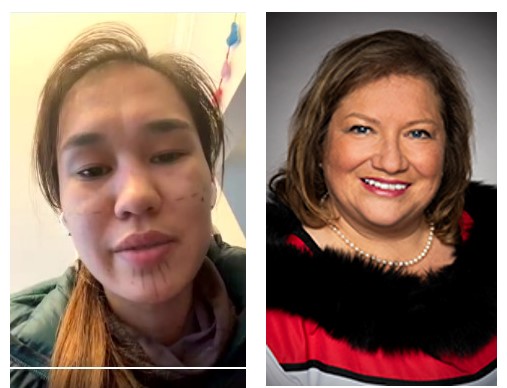 “If you are going to claim Inuk identity, then where does your Inuk-ness come from?” Qaqqaq asked in a 33-minute Twitter live video posted on her account Thursday morning.

At 5:30 p.m., she issued an email statement apologizing “for how I handled the situation.”

“Recently, I made comments on Twitter that personally challenged the identity of MP Yvonne Jones. The way that I handled the situation and the way I commented was aggressive and disrespectful and I’m sorry for making them.

Jones had dismissed the video as “immature and naïve” in an interview.

Qaqqaq describes her own ancestry at least six times in the video, naming her parents and grandparents as evidence of her own Inuit ancestry. She said it’s common among Inuit to ask each other about their background and called it a “simple question that, as Inuit, we would be more than willing to answer.”

“So, Yvonne Jones, who is your family? It’s more than OK to share that with us,” Qaqqaq said in the video, in which she repeated the same question at least 10 times.

Her office did not immediately respond to a request for a comment about the video but issued a written statement later in the day.

Jones said the video reflects poorly on Qaqqaq and accused her of “lateral racism” — the bashing of people within the same ethnic group — that’s inconsistent with the NDP’s reputation for inclusiveness. She added Qaqqaq is “clearly uneducated and uninformed” about Inuit in Labrador.

The dispute between Qaqqaq and Jones has aired out in public since last week, when Qaqqaq replied to a two-year-old tweet to say “Jones is not an Inuk.” She posted the comment within hours of an exchange she and Jones had during question period in the House of Commons.

Jones demanded an apology on Monday in the House of Commons.

Qaqqaq refused to apologize and, in fact, called on Jones to apologize for “wrongfully claiming” to be something she’s not.

“I’m not going to apologize,” Qaqqaq said toward the end of the video. “I know until I am proven otherwise Yvonne Jones is not Inuk.”

Qaqqaq said if Jones can point to her lineage, it would be “a different situation” and she would be “more than willing to admit I was in the wrong.”

“Until you can tell me who your family is and where you come from and how you’re Inuk and validate your Inuk-ness, you have no space to say you’re Inuk. Stop saying you’re Inuk. If a group of people does not claim you, then you are not,” Qaqqaq said.

Jones belongs to the NunatuKavut people, a group that formed after the Nunatsiavut land claim agreement determined the status of some Inuit in northern Labrador. The Nunatsiavut population is approximately 1,500, according to the 2016 census. People who didn’t qualify for that group joined the NunatuKavut group, she said. It represents 6,000 members, its website says.

It’s common for members of the same family to belong to one group or the other based on where they were born and how the fall within the Nunatsiavut land claim agreement, Jones said.

In an interview, Jones said she is “very proud” of both her settler and Indigenous backgrounds.

“I am a descendant of both Inuit and settler in Labrador. My roots go back to the 1800s in identifying my Inuit lineage in Labrador,” she said.

“I grew up in a very traditional culture. I very much practised the traditional way of life,” Jones said, speculating she is one of only a few women MPs with a firearms certificate and a hunting licence.

There have been decades of “confusion” for Inuit in Labrador because a “colonial system” identified people of mixed Inuit and settler ancestry as Métis — a term traditionally used for people of mixed First Nations and European descent.

“That’s where the confusion is,” Jones said. “It was brought on through a colonial system that really didn’t know where Indigenous people lived in this country.”