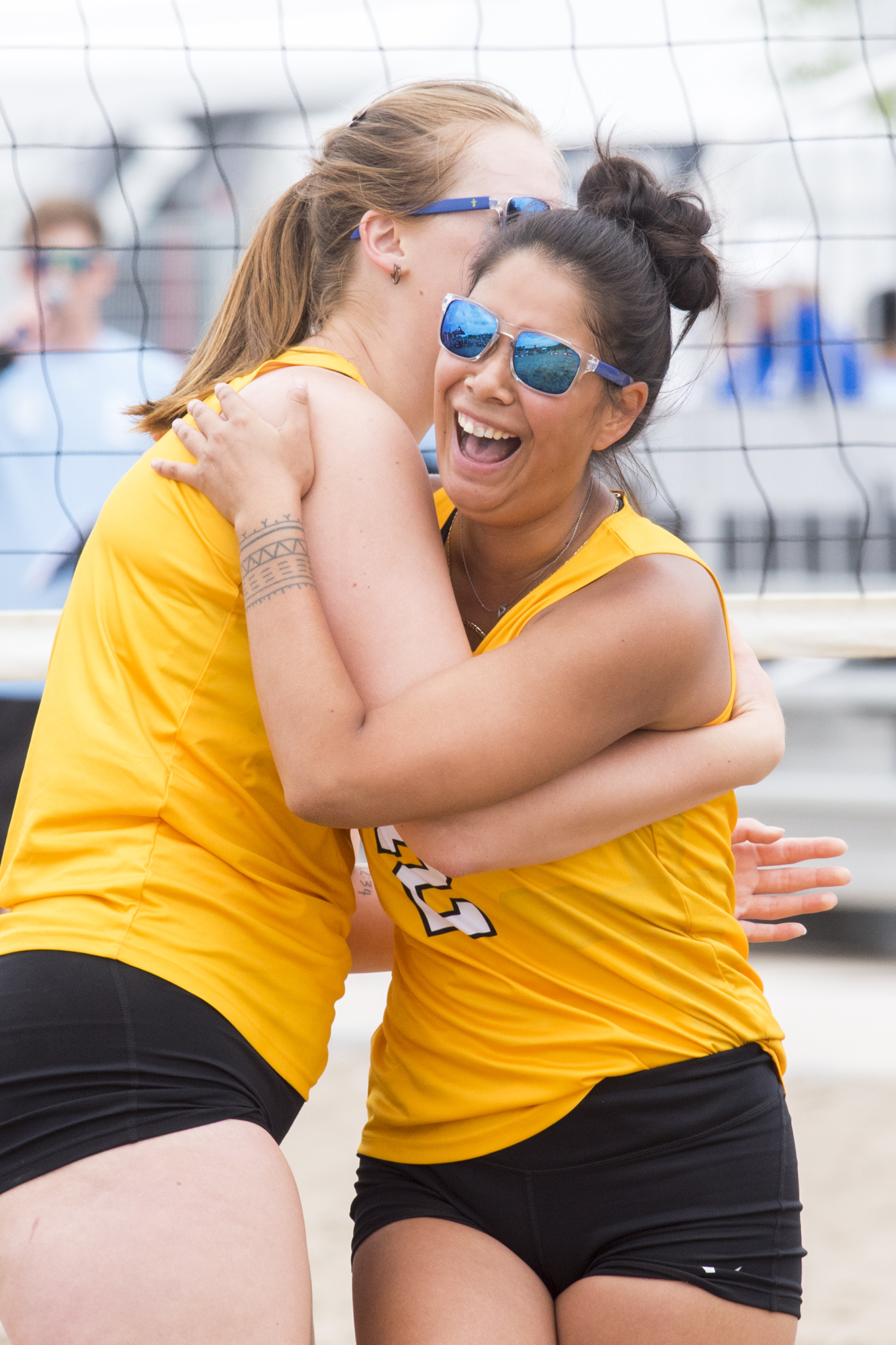 Nunavut women’s beach and indoor volleyball player Shawna Kyak (right) has been named Team Nunavut’s flag bearer for the closing ceremonies at the Canada Summer Games in Niagara on Sunday. Pictured here is Kyak celebrating with teammate Talia Grant during a game in Week 1. (Photo by Denis Cahill, special to Nunatsiaq News)

“It’s amazing … I’m so excited. I’ve got no words,” Kyak, 21, told Nunatsiaq News only a few minutes after she received the news.

“I’ve represented Nunavut for about eight years. This is my last year, and this is a good way to celebrate what I’ve achieved,” she said of the honour.

Kyak, from Iqaluit, was seen as a clear choice to be flag-bearer — she pulled double-duty at the amateur sports competition in Ontario’s Niagara region, playing beach volleyball in Week 1 of the Games and following that up as a member of the indoor volleyball team in Week 2.

This year was the first time Nunavut had sent a team to compete at the summer games, making Kyak’s appearances on both courts a history-making turn.

Between the two sports, Kyak said she loves both but feels particularly attached to indoor volleyball as she’s played with her teammates for years. 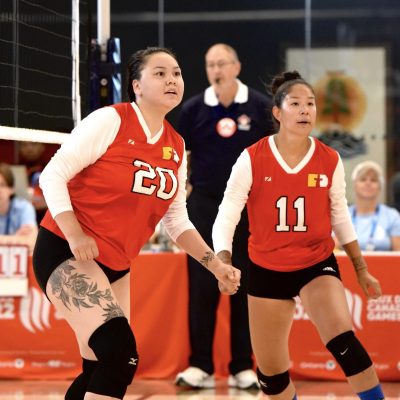 Closing ceremonies flag-bearer Shawna Kyak (right) keeps her eye on the ball next to teammate Kailee Karlik at the women’s indoor volleyball game against the Northwest Territories on Aug. 19 at the Canada Summer Games in Niagara. (Photo by Denis Cahill, special to Nunatsiaq News)

“I love the sport. It’s just amazing. I am happy with the outcome that we’ve had. Our team works so hard with the beach team, and they know I’m so proud of them,” said Kyak, who moves to Ottawa in September to study recreation and leisure services at Algonquin College.

“It was my first time playing beach volleyball, so I had some getting used to, but my heart is with indoor volleyball — I’ve been with these girls for so long. We’re a family.”

The men’s beach volleyball team finished in 13th place and mid-afternoon Sunday the men’s indoor team was awaiting its final ranking as well.

Kyak hopes Nunavut’s volleyball debuts at the games will inspire more people back home to pick up the sport.

“We’ve been all over the news back home and so many people have congratulated me and other girls on my team, and they’re so proud,” she said.

“I think it’s been a good influence on the younger generation and I hope that they’ll take the opportunity that we’ve taken [to compete].”

Kyak takes over flag-bearing duties from wrestler Eekeeluak Avalak, from Cambridge Bay, who carried Nunavut’s flag into the opening ceremonies. Avalak won the territory’s first-ever gold medal when he triumphed in the men’s wrestling tournament in the 52 kg division Aug. 11.

The closing ceremonies for the Canada Summer Games can be livestreamed on the competition’s website starting at 7 p.m. ET Sunday.