‘We have to protect Indigenous languages’: Mary Simon 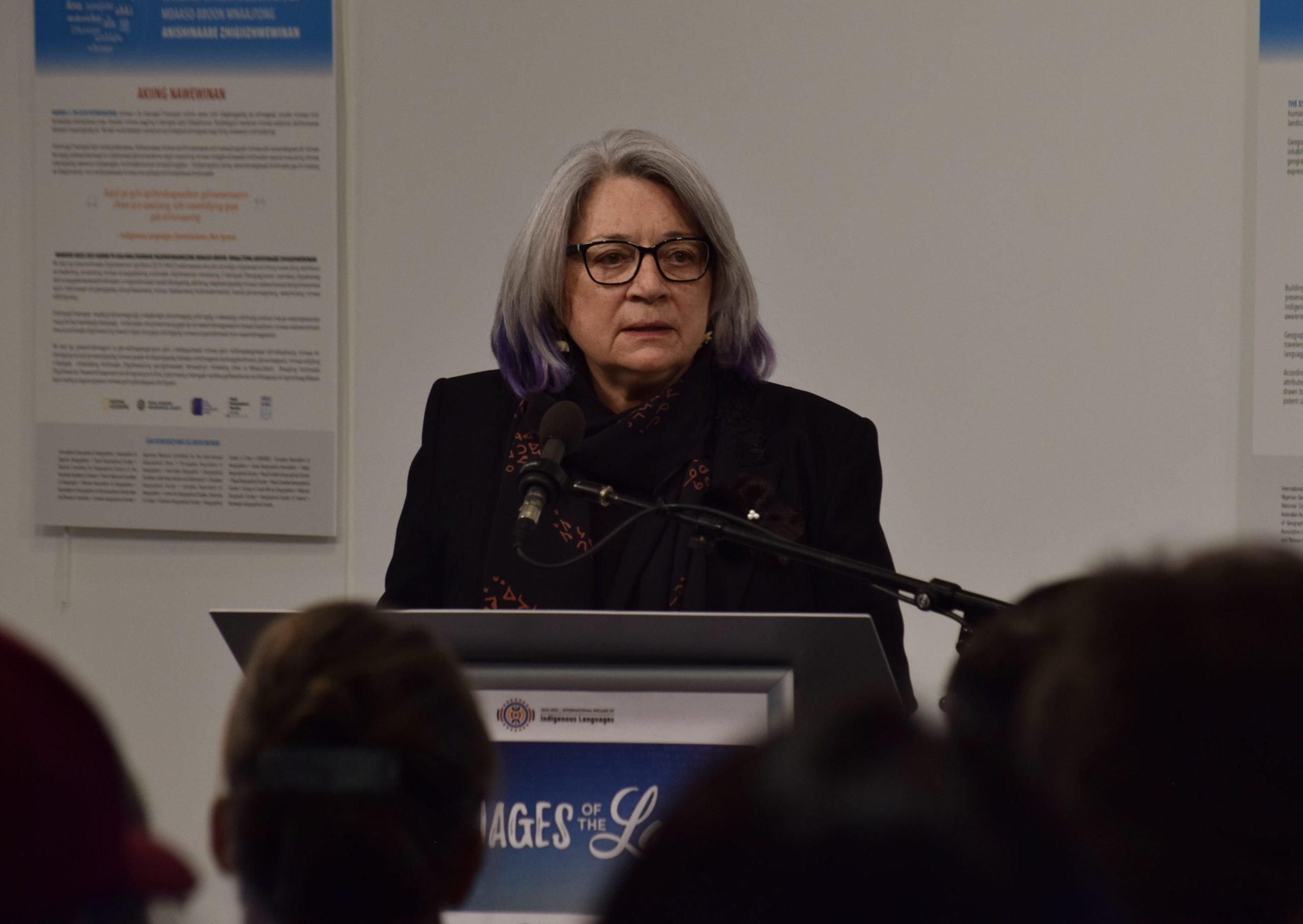 Gov. Gen. Mary Simon speaks at the Canadian launch of the UN’s International Decade of Indigenous Languages at the Royal Canadian Geographic Society on Friday in Ottawa. (Photo by Madalyn Howitt)

“It is very much an integral part of our identity and we need to use every tool that we have to protect Indigenous languages,” Simon said in a speech Friday, marking the Canadian launch of the United Nations’ International Decade of Indigenous Languages.

She co-hosted the event at the Royal Canadian Geographic Society in Ottawa with its honorary president, Perry Bellegarde, former national chief of the Assembly of First Nations. Simon was made a patron of the organization earlier this month.

The Decade of Indigenous Languages, running until 2032, is meant to emphasize Indigenous peoples’ rights to freedom of expression and to an education in their mother tongue to help the survival of Indigenous languages around the world.

“As Indigenous peoples, one of the most important rights we have is the right to self-determination,” Bellegarde said.

“That’s because we have our own languages, our lands, our laws, our own people, and our own forms of government. So language is so important for our survival.”

Simon, the first Indigenous person to serve as Canada’s Governor General, said she believes Indigenous peoples have a “responsibility” to speak their traditional languages with family and friends as much as they can.

“There is no better way of preserving and enhancing one’s language (than) by using it in every possible way,” she said, noting she spoke Inuktitut in her throne speech last fall and when she was sworn in as Governor General last July.

“I think for me to use it and to speak it is important. I think it will be a kind of hope that we can keep our languages healthy and alive.”

Simon recalled growing up and being allowed to speak only English at her federal day school. She said she was punished if she was caught speaking Inuktitut in the classroom.

“Many Indigenous languages have been lost because of residential schools, colonization and the assimilation policies of churches and the government,” she said. “This was not a choice Indigenous people made, but it was done by force.”

It was only when she was at home that she could express herself in her first language of Inuktitut, Simon said.

“I thank my family every day for giving me the opportunity to really learn the language and have an in-depth understanding of what language means to each and every one of us,” she said.

She acknowledged the “great strength and resiliency” Indigenous peoples have shown in keeping their languages, cultures and identities alive despite years of adversity and assimilation policies.

“Reconciliation is allowing children to learn any other time in a safe space where they can succeed while speaking in their language of choice,” she said.

“To all the young people, I encourage you to continue your efforts to learn the languages and I know the preservation of our cultures will succeed with you leading the charge.”

The day-long event included a lighting of the qulliq, a traditional oil lamp, by Inuit elder Aigah Attagutsiak; a drumming prayer by Odeshkun Thusky, from Kitigan Zibi Anishinabe Nation; and a smudging by Joshua Morin (Métis) to open the ceremony.

The event was livestreamed on Facebook and was a collaboration with the Canadian Commission for UN Educational, Scientific and Cultural Organization and the Canada Council for the Arts.