John Kapakatoak of Kugluktuk pulled in the 1.8 metre shark on Monday 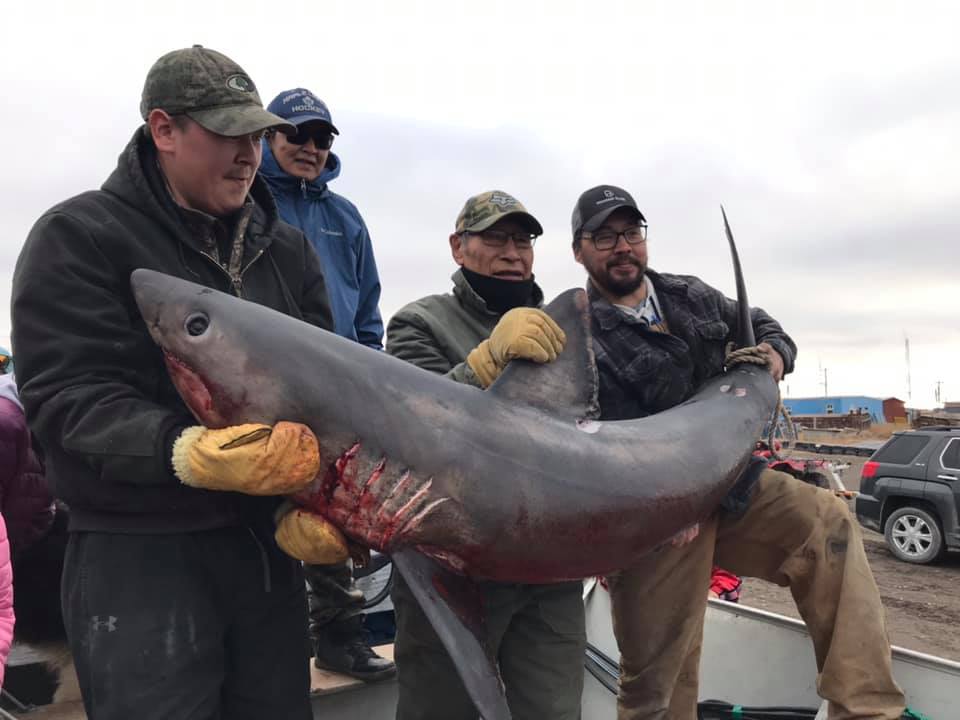 From left: Kevin Ongahak, Ian Niptanatiak, John Kapakatoak and Kevin Klengenberg of Kugluktuk hold the shark that Kapakatoak pulled up in his seal nets near the western Nunavut community. (Photo by Miranda Atatahak/Facebook)

There was big excitement yesterday along the beach in the western Nunavut community of Kugluktuk.

That’s where John Kapakatoak pulled in the 1.8 metre shark which he had caught in his seal nets.

Outside of television and films, seeing a shark was a first for people in this community of about 1,500.

“What an amazing and strange sight to see,” said Miranda Atatahak, who posted her photos of the catch, which were widely circulated on social media during the evening.

“Shark Week in Kugluktuk,” she joked.

Many in the community suggested the shark’s presence in the area was due to global warming.

Judging from the spot on its dorsal fin, the shark caught by Kapakatoak appears to be a porbeagle shark—which are usually not, if ever before, seen in the western Arctic.

Here’s a close-up view of the shark that landed in Kugluktuk Sept. 16. (Submitted photo)

According to the Department of Fisheries and Oceans, porbeagle adults can attain a size of over three metres but usually average between 1.5 m and 1.8 m in length and weigh about 135 kg.

They have an average life expectancy of 30 to 40 years.

“Porbeagle meat is among the most valued of shark meats,” states a backgrounder prepared by DFO.

Online sources say that while the porbeagle is related to the feared great white shark, it rarely attacks humans.

The International Shark Attack File lists two unprovoked attacks by porbeagles off England and Canada, both on divers and both non-fatal.

If it’s a porbeagle that was caught in Kugluktuk, the shark appears to have wandered far from its usual range.

The Northwest Atlantic shark population is widely distributed in both inshore and offshore waters and ranges from northern Newfoundland and Labrador to New Jersey and possibly South Carolina.

But the DFO said the distribution of porbeagle is limited primarily by temperature, as 50 per cent of its time is thought to be spent in waters between 8 C and 13 C—warmer than those in the Arctic Ocean.

This shark annually migrates in the North Atlantic from Massachusetts up to Newfoundland.

Mature females migrate south to the Sargasso Sea (between Bermuda and Cuba) to give birth to their pups, the DFO said.

Kugluktuk’s shark could also have been a salmon shark, from the North Pacific Ocean. Salmon sharks, which are closely related to porbeagle sharks, are frequent visitors to the waters off southern Alaska.

Nigel Hussey, a marine scientist and expert in sharks from the University of Windsor, told Nunatsiaq News that the shark netted in western Nunavut appears to have traits that match with either a porbeagle or a salmon shark.

But Hussey said that it would be unusual for either species to be in this region.

“Even for salmon sharks, they don’t normally range this far north. Therefore this capture suggests either this is a one-off and the shark had roamed a long way from home or, coupled with noted shark captures in Greenland,  that there is the potential for these sharks to be expanding their home range northwards,” he said.

This may be happening in response to changing climate, such as warming sea temperatures,  he said.

Sharks may be following their prey which are also shifting northwards, Hussey suggested, adding that “more work is required to understand how sharks in north Pacific and Atlantic waters may be modifying their movements to include more northerly excursions.”

“This has implications for the structure of northern food webs and potentially provide a measure of how rapidly they are changing with climate change,” he said.

The shark is not the first unusual sea life has been seen in western Nunavut. The region’s waters have also hosted visiting pods of belugas and narwhals.

Some have suggested they come into the area following Canadian Coast Guard icebreakers.

(On Sept. 19 the DFO confirmed that the shark was a salmon shark. You can read more here.)