Finding staff is a “struggle” for many businesses 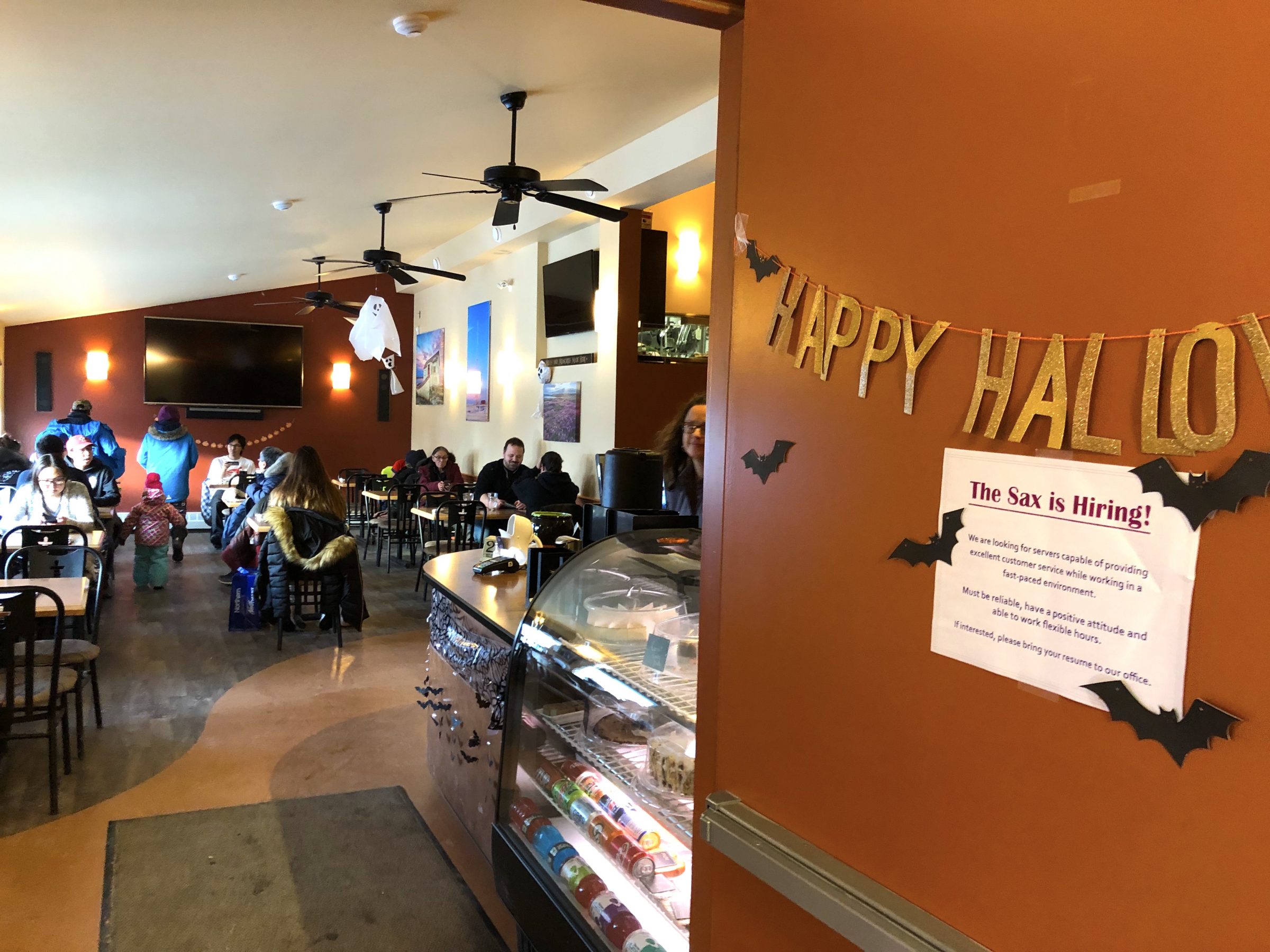 At the Saxifrage Resto-Café in Cambridge Bay a sign encourages patrons to apply for jobs. (Photo by Jane George)

CAMBRIDGE BAY—Looking for work? Some businesses in western Nunavut’s hub are crying out for workers, and if you want a job, you don’t even need to have any special skills or education.

And, while you often hear that the Kitikmeot region needs more jobs, there appears to be plenty of work available in this growing community of about 1,800 for people who are reliable and energetic.

But who wants these jobs?

Few, it appears, based on what you hear from those who manage or own local restaurants and stores.

Nearly all of those who spoke to Nunatsiaq News said they experience big problems attracting and keeping workers as cashiers, servers and the like.

To scout out workers, these businesses post signs around town, on their premises and on social media.

The Saxifrage Resto-Café, a popular, Inuit-owned business, is among the hard hit.

“We are looking to hire Restaurant Servers to join the Saxifrage Team! Must be reliable, have a positive attitude and be able to work in a fast-paced environment. Waiting experience is a plus but we also offer on the job training,” said a recent social media posting from the Saxifrage.

The pay for a server at the Saxifrage starts at about $14 an hour, plus tips, and wait staff can also enjoy free meals after their shifts.

Manager Maggie Foseid said she provides training and encourages hires to get to know the various foods on the menu and to reach out to customers, new and old.

But most stay just long enough to collect one pay cheque. 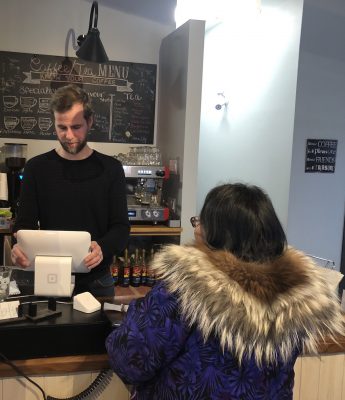 Stuart Rostant, one of the owners of the Kuugak Café in Cambridge Bay, takes over the cash on a busy lunch hour when there are not enough staff to go around. (Photo by Jane George)

It’s much the same situation over at the Kuugak Café, where co-owner Amanda Doiron Rostant said it’s no problem to get people who work elsewhere to moonlight as servers during evenings or weekends.

But during the day it’s a different story. No one wants to work that shift. So you may see her or her husband Stuart running the cash or taking orders.

That’s despite the fact that during a busy lunch hour a server can earn at least $20 an hour, and eat later as well.

The lack of staff caused the Kuugak to stop opening at 8 a.m. even though they could attract clients at that hour.

It’s a “vicious circle,” Doiron Rostant said: the busier the café is during the day, the more time the cooks need time to prepare, but they don’t have the local staff or available housing to bring in staff from outside, so the only alternative is to scale back on hours.

The same is true at the Arctic Islands Lodge which sometimes had to close due to lack of staff. Comments on social media say that potential patrons have turned up only to find the restaurant closed.

The Kalgen’s Dis and Dat airport concession has also closed on occasion due to lack of staff, including on one day this past August, also one of the busiest cruise ship transfer days.

Then, there are the other stores: the co-op often lacks local staff and the same can be said for the Northern.

There, cashiers are paid more than minimum hourly wage, plus they get $5 an hour worth of food.

But this bonus of $40 an eight-hour shift doesn’t appear to make a difference as often only one, or even none, of the cashiers shows up.

At the Olapkivik Gamehall, run by Inuksuk Enterprises Ltd., sometimes owner Bruce Peterson must be on the floor. But, even then, it takes two to properly run the place.

It’s hard to say what the solution to this shortage of workers is.

But Sandi Gillis of Qillaq Innovations Ltd., which carries out a variety of different contracts around the community of 1,800, said “our people who work for us in Cambridge Bay want lives, so we have to backfill with people who just come here to work.”

Gillis said Qillaq tries to build a team feeling, so that the local workers don’t feel that southerners are taking their jobs “but are supporting us, so it’s not a problem if they want a weekend off.”

Meanwhile, to prepare people to work, the Kitikmeot Inuit Association delivers employment skills programs, not just in Cambridge Bay but throughout western Nunavut.

“Some participants feel that if they take a short term program, they will or should be able to gain employment immediately….[but] a significant number of job applicants do not actively seek employment following the training program,” said Michelle Buchan, the manager of Inuit employment and training, at the KIA’s annual general meeting earlier this month in Cambridge Bay.

The courses delivered by the KIA stress the importance of job retention and showing up consistently for work, Buchan said.

“We help beneficiaries understand the financial benefits of being employed and also the effect it has on co-workers and the employer when there is frequent turnover of employees or employees who are unreliable,” she said.

Of the 84 training, about 45 gained employment, she told the AGM.