“We’re here for the long term” 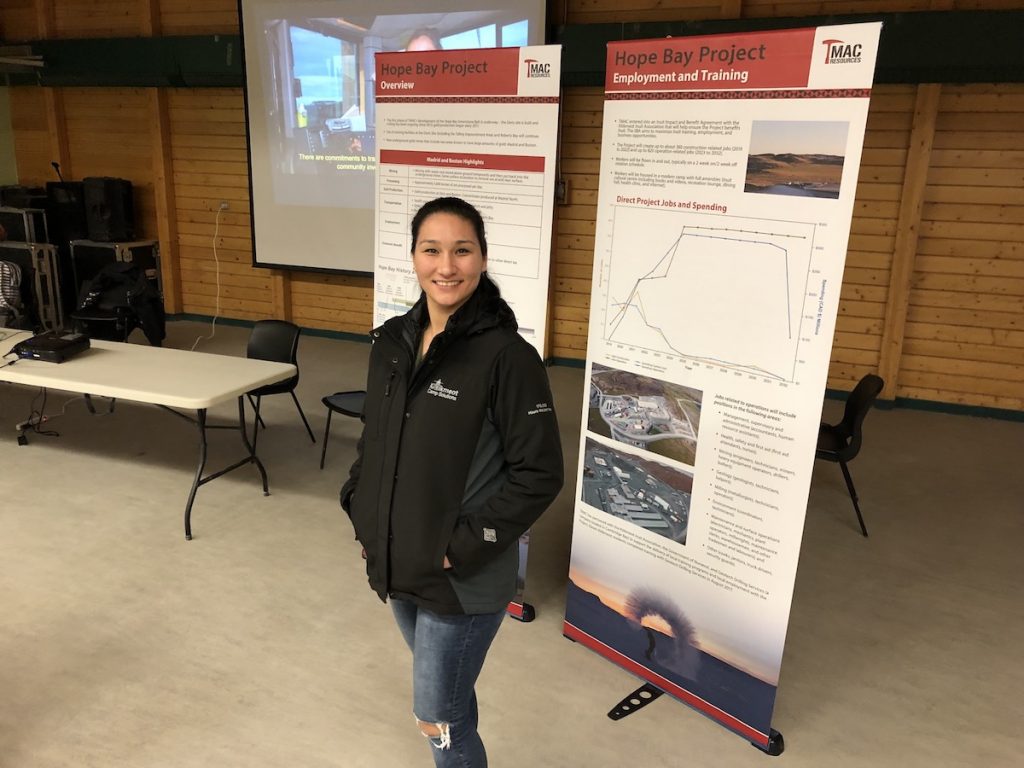 Amy Anguti, who works for Kitikmeot Camp Solutions Ltd. at TMAC Resource Inc.’s Hope Bay gold mine, stands in front of a poster with information about the mine and its job opportunities on Oct. 7 at the Luke Novoligak Community Hall in Cambridge Bay. Anguti, who has been working at the camp’s kitchen for three years, says she loves her “go-go-go” job. (Photo by Jane George)

CAMBRIDGE BAY—If you live in one of Kitikmeot region’s five communities, this week you could find out about the many job opportunities at TMAC Resources Inc.

Starting in Cambridge Bay on Monday, TMAC planned to tour throughout western Nunavut, with those on hand ready to talk about the many jobs available now and in the future at its Hope Bay gold mine near Cambridge Bay.

A selection of Inuit already working the mine, for TMAC and its contractors on-site, will come along for the visits.

Talking about the unexpected chance to see her mother in Kugaaruk along the way brought a smile to one of the participants in the tour: Amy Anguti, an employee of Kitikmeot Camp Solutions Ltd., who now lives in Edmonton.

Anguti holds a degree in business administration from Alberta’s CDI College.
But since her graduation in 2016, Anguti has put her organizational skills to work in Hope Bay in the kitchen, where she was recently promoted to team leader.

Anguti started working at Hope Bay after a friend called her and encouraged her to apply for a job there. The next day, Kitikmeot Camp Solutions, a subsidiary of the Kitikmeot Corp., interviewed her and within a week Anguti was at the mine.

It’s a “go-go-go” kind of job that suits Anguti, who describes herself as a workaholic.

Anguti works the night shift in the kitchen, from 8:30 p.m. to 8:30 a.m., where she and others prep and then make breakfast for everyone in the camp.

While you may think breakfast is all about cooking bacon, eggs, pancakes, sausages and other morning fare, Anguti also describes some of the mouth-watering daily breakfast specials, such as a Mexican skillet breakfast or apple pie pancakes with caramel sauce.

When Anguti eats breakfast it’s already the end of her 12-hour shift, so it’s her supper, she said.

Then she said she heads to her room, which is equipped with its own television and internet connection.

Before getting some sleep, Anguti said she also sometimes gives herself a facial (“self-care is important,” she says) or she works out in the gym or talks to her family.

The one-month-long absences are made easier now due to improved internet connections.

“When I started, sometimes we wouldn’t have a telephone connection for two days,” she said.

After her shift, it’s back to Edmonton for relaxation and family time.

“Now I have money in my savings account,” Anguti said, and she can continue to pay off her studies.

If there’s any downside to mine camp living, it’s not the atmosphere—peace and respect is maintained due to TMAC’s zero tolerance policy for any alcohol or substance use, Anguti said.

Maybe the downside is that workers like Anguti never go outside due to the many layers of safety regulations at the mine site.

Alex Buchan, TMAC’s vice-president of corporate social responsibility, who was present at the Cambridge Bay career awareness event, said he hopes to get people interested in TMAC careers.

“We’re trying to steer people in the right direction. People come and want immediate work but they need the skills,” Buchan said.

Buchan came to the event with a list of jobs, as well as information about the training and education required in each role.

Buchan came to the event with a list of jobs; with information on the employment type, location, and education requirements; whether the training is available in Nunavut, and examples of where to receive needed training and education.

Take the opening for an environmental assistant, one of two permanent positions at this level that are available: you will need a high school degree or equivalent, preferably a college degree and a firearms certificate. But you can get the education in Nunavut at Nunavut Arctic College.

However, if you want to be an intermediate production geologist, you’ll need a post-secondary education and you’ll probably have to go outside Nunavut.

That could take planning, but “we’re here for the long term,” Buchan said.

As it expands its operations on the Hope Bay gold field, TMAC expects to create up to about 360 construction jobs by 2022, and then 820 operational jobs from 2023 to 2032. And there are also several contractors with employees like Anguti on site.

According to the Inuit impact and benefit agreement with the Kitikmeot Inuit Association, at its Hope Bay mine TMAC will maximize Inuit training employment and business opportunities.