Bars, restaurants can open at half capacity on June 22 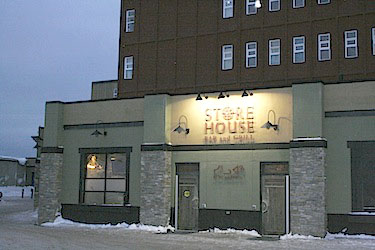 As the Government of Nunavut lifts restrictions intended to prevent the spread of COVID-19, bars and restaurants, such as the Storehouse in Iqaluit, are allowed to open at half capacity. Nunavut’s chief medical officer of health is asking residents to continue to limit the number of people they interact with. (File photo)

Nunavut’s chief public health officer, Dr. Michael Patterson, says there’s no formal limit to how many people you can socialize with when bars and restaurants open in the territory next Monday.

But he’s asking residents to behave responsibly and to avoid risky behaviour that could spread COVID-19.

“If people wanted to, could seven or eight people from seven or eight households get together at the bar and hang out? Yes,” Patterson said at a news conference today. “Would I advise that? No, I wouldn’t.”

“Nobody’s going to be going around and checking addresses or anything like that,” he said.

When the territory’s bars and restaurants are allowed to reopen on Monday, June 22, according to guidelines set by Patterson, they will operate at half capacity, and last call for alcohol will be at 9 p.m.

In addition to bars and restaurants opening, hair and nail salons, theatres and churches will be allowed to resume their services.

And on June 29, if all goes well and Nunavut remains free of confirmed cases of COVID-19, youth centres and day camps may operate, and visitors will be able to see family members at long-term care facilities.

To date, 1,288 people have been investigated to determine whether they have COVID-19. Currently, 137 people are under investigation.

Prime Minister Justin Trudeau announced on Tuesday, June 16, that the Canada Emergency Response Benefit, or CERB, will be extended for two months.

Joe Savikataaq, Nunavut’s premier, reiterated today that the benefit is only for people who are currently not making money because of COVID-19.

“My understanding is it’s very easy to access,” Savikataaq said. If people who apply who aren’t eligible, they’ll get the money, but then they’ll have to pay it back the next time they do their taxes.

Savikataaq said he doesn’t have “hard proof” that CERB is being abused in Nunavut. He just doesn’t want anyone to owe a lot of money down the road, he said.