“I had stumbled on the best unfolding story in Canada. I haven’t changed my mind” 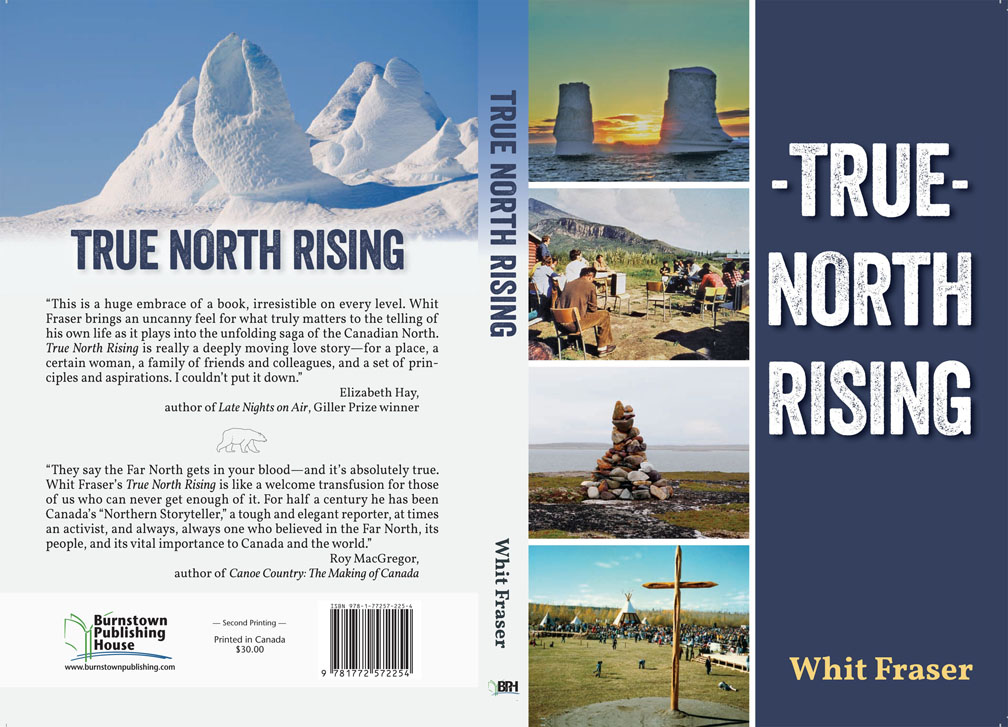 Whit Fraser’s memoir, True North Rising, looks back on his five-decade relationship with northern Canada. You can get the book from Burnside Publishing Corporation.

It was in April 1967, at the tiny, 600-square-foot radio station which CBC Northern Service then used inside the three-storey federal government building near the Frobisher Bay airport, that Whit Fraser’s 52-year odyssey through northern Canada got started.

“In my early days with CBC I believed I had stumbled on the best unfolding story in Canada. I haven’t changed my mind,” Fraser writes in his big-hearted new memoir, True North Rising, published late last year.

An expression of abiding love for northern Canada and its people, True North Rising is an irresistible collection of stories, rants, and intimate confessions. You can order it directly from Burnstown Publishing Corporation.

Fraser, who grew up in Pictou County, Nova Scotia, learned broadcast journalism the old-fashioned way: on the job. He flunked math in Grade 10, left school, and at age 17, landed a job at a radio station in New Glasgow.

That job didn’t last, so he joined the RCAF. At the air force base in Summerside, P.E.I., he served with a corporal whose brother happened to be Austin Curley, then the administration officer for CBC Northern Service.

The CBC manager heard Fraser’s voice over the air, working part-time at the local radio station. Four or five months later, Fraser found himself aboard a DC-4 on a 10-hour flight from Montreal to Frobisher Bay, as Iqaluit was then called in English. From there, he saw every corner of northern Canada, reporting the news for more than 30 years on CBC radio and television.

And it’s fitting that he worked his final television broadcast on April 1, 1999, when, with his lifelong friend, the legendary Jonah Kelly of Iqaluit, he hosted the ceremony that inaugurated the new territory of Nunavut.

He followed that with stints as chair of the Canadian Polar Commission and as executive director of the Inuit Tapiriit Kanatami.

Along the way, he formed lasting friendships with numerous Indigenous and northern leaders and ended up sharing his life with Mary Simon, the respected international Inuit leader from Nunavik.

And opinions? Whit Fraser’s got opinions. In a postscript, Fraser ends his memoir on a dark note, pointing out that northern Canada’s social and health care problems now appear to be as bad as they were 50 years ago.

To that end, he calls for massive government action to reverse what he calls a tide of social destruction. “It’s the painful and tragic angle in the unfolding story of our rising north—true and strong—that I will continue to follow. I hope you will too,” he says.

It was in the mid-1970s that this passion for the well-being of Indigenous people—and his deeply held opinions about northern issues—got him into serious trouble with CBC.

In the early 1970s, Fraser had transferred to Yellowknife. At that time, energy companies were proposing pipelines to carry Arctic natural gas through the Mackenzie Valley from either Alaska or the Mackenzie Delta into markets in southern Canada.

This led to a national controversy. Indigenous leaders, churches and environmentalists opposed the multi-billion-dollar project, while business interests supported it. Many N.W.T. political leaders, and most of its newspapers, were all strongly pro-development.

So the minority Liberal government of the late Pierre Trudeau appointed the respected lawyer, judge and former NDP politician, Thomas Berger, to lead an inquiry into the pipeline proposal. At hearings in 35 N.W.T. communities, Berger took evidence from more than 1,000 witnesses.

Fraser followed those public gatherings and reported what he heard for CBC listeners across northern Canada and for millions of southern Canadians. That he devotes at least four chapters of his book to that period tells you this was a defining period in his life. You can hear his voice in this CBC radio report from 1976.

But at a hearing held Aug. 9, 1975, in the small oil-producing town of Norman Wells, N.W.T., Fraser lost his cool and almost lost his job. That was after hearing some blatantly racist testimony from non-Indigenous witnesses.

The reporter becomes the story

In a chapter titled “The Shit Hits the Fan,” Fraser said he threw his pencil down and demanded Berger accept him as a witness. He now describes this as a lapse in editorial judgment and a selfish act that he still feels conflicted about.

“Well, I want to tell you right now that I don’t want the pipeline, and I don’t want it because the Indians don’t want it,” Fraser told the inquiry, in words that will live for all time on the Berger inquiry transcript.

CBC’s managing editor of radio news, Eric Moncur, shouted at Fraser over the phone for his “idiotic thinking” and “stupid, bone-headed move.” Reporters from the Globe and Mail, Edmonton Journal and Canadian Press filed national stories reporting that Fraser had compromised his objectivity.

And for many weeks, the N.W.T. Chamber of Commerce, the N.W.T. Association of Municipalities, various MLAs and municipal leaders all demanded that CBC remove Fraser from covering the inquiry. The mayor of Fort Simpson even threatened to ban him from the community.

But Fraser kept his head down and weathered the storm. CBC Northern Service sent him a severe letter of reprimand and Fraser continued to cover the inquiry.

In time, Berger recommended that the Mackenzie Valley pipeline proposal be delayed for 10 years. But it would have likely sunk under its own weight. The price of natural gas was too low to justify its enormous cost. A second proposal put together in 1999, backed this time by many Indigenous corporations, fizzled in 2017 for the same reason.

At the same time, Fraser says he still can’t condone those non-Indigenous N.W.T. residents who were willing to treat Indigenous peoples as second-class citizens. “Many didn’t see them as citizens at all,” Fraser said.

Those insights into a turbulent period that’s now passed into history make this a must read for anyone interested in northern Canada.