Ritual greeting has a long history in Nunavut 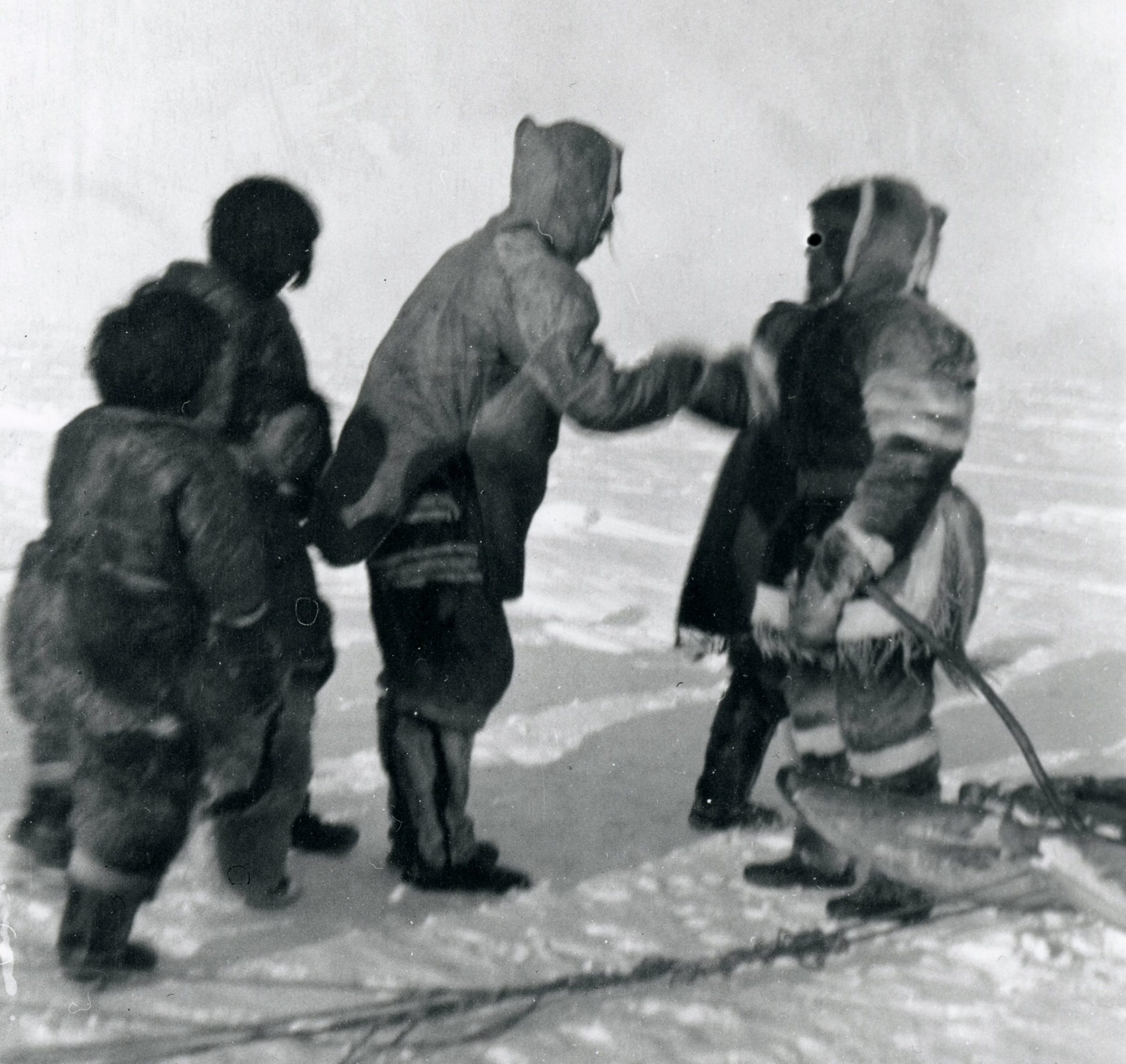 Peter Freuchen took this photograph of Inuit newly converted to Christianity shaking hands on meeting around 1923. Hand-shaking became a ritual for new Christians. (Photo courtesy of National Museum of Denmark)

The COVID-19 pandemic has led to public health suggestions that the country has never faced before. One of them is to avoid shaking hands.

Early in the pandemic, there was discussion in the media about whether the handshake should ever return and, if not, what would replace it. Some suggested the fist bump, the elbow bump, the ankle bump, or even the Sanskrit word “namaste,” meaning “I bow to you,” said with your hands over your heart or clasped in front of your chest, while making a slight bow.

The handshake has a long history in Nunavut, but not as long as you might think, for it was not a traditional Inuit way of greeting or acknowledgement, but was introduced by the first Qallunaat explorers, whalers and traders.

When William Edward Parry met Inuit who had never before seen a white man, near Igloolik in 1821, he “walked up to the natives, who stood perfectly upright and motionless until he approached. A kind of salutation now took place, which was by stroking the breasts in a solemn manner.”

Diamond Jenness, an anthropologist on the Canadian Arctic Expedition in the 1910s, noted that the Nattilingmiut “have a very peculiar manner of welcoming strangers; they give them a buffet on the head or shoulder with their fists. Their mittens deaden the force of the blow to some extent; nevertheless it is no mere tap.”

He and some Inuit companions met a group of Inuit who had arrived from Prince Albert Sound. On ascertaining that the newcomers were friendly, “One of our party, Kesullik, then rushed down the slope, and wrestled with one of the visitors, pretending to push him away, and exclaiming nunaga, nunaga, ‘It’s my land,’ while the visitor answered tikittunga ‘I have reached it, I have come.’ Every one was greatly excited, and gathered, laughing, around the wrestlers.”

An earlier anthropologist, Franz Boas, noted that “In Davis Strait … the game of ‘hook and crook’ is always played on the arrival of a stranger. Two men sit down on a large skin, after having stripped the upper part of their bodies, and each tries to stretch out the bent arm of the other. These games are sometimes dangerous, as the victor has the right to kill his adversary…”

In the 1860s, when the American explorer Charles Francis Hall visited Inuit in the Pelly Bay area, an elderly man there recounted stories of having met men from the Franklin expedition. These men “would take hold of his hand, giving it a few warm and friendly shakes, and Toolooark (probably Franklin himself) would say ‘Ma-my-too-mig-tey-ma’. Aglooka’s hand-shaking (probably Crozier) was short and jerky, and he would only say ‘Ma-nig-too-me.’” Even then, Inuit were observing the differences in Qallunaat handshake styles.

The handshake became common not only on an arrival but also when people were leaving.

Northern literature is replete with mentions of the handshake. The missionary Isaac Stringer wrote in 1893 at Herschel Island, “Then I had to go through a great handshaking process. Some were shy … They have hardly got into the way of shaking hands yet.”

A member of an expedition that stopped at Button Point in 1922 wrote that the Inuit “are great fellows for shaking hands on meeting and leaving you.”

The following year the trader Henry Toke Munn referred to “a long round of hand-shaking ashore.”

The missionary Archibald Lang Fleming wrote about the Inuit at Lake Harbour in 1913 departing after Christmas festivities “after much hand-shaking and many expressions of thanks.”

Some Inuit apparently had used a type of handshake in ancient times but only in limited circumstances and restricted to male relatives. The respected elder Noah Piugaattuk, interviewed in 1991, said, “After they had been separated for a long period of time, when they meet their kin, they will shake hands, with their left hand … This was so that they each can assure themselves that they will try to live to the fullest without facing dire consequences.”

Perhaps it was this custom that the catechist Luke Kidlapik recounted to Rev. Edmund Peck in 1917 when he told him of a Christian Inuk meeting other Inuit far to the north, who had never heard the gospel. On being invited to shake hands, the northern Inuit, wishing to be friendly, “stretched out not their right but left hands, as this mode of greeting was quite new to them.”

All this changed for Inuit in north Baffin and the Igloolik area when they became Christians. Noah Piugaattuk described his first visit to Pond Inlet after the Tununirmiut had adopted Christianity: “The people that came to meet us shook our hands, this was their way of showing that they had been converted to Christianity, and this was the first time that I had ever seen and experienced hand shaking.”

People even shook hands with newborn babies, because “the newborn was considered to be a new arriv­al.”

This was to denote that the newly minted Christians had thrown off their adherence to their previous beliefs but, as Rachel Uyarasuk said in 1999, the handshaking “became a new ritual.”

All this happened well before the arrival of white missionaries in north Baffin Island or the Igloolik area. Therkel Mathiassen, a Danish archaeologist working in the Igloolik area, noted the ritual of singing a hymn and handshaking whenever anyone arrived at or left a settlement and “even the dog’s paws were taken.”

An RCMP officer visiting Igloolik in 1923 wrote, “When a visitor was seen to approach a settlement, the entire adult population would line up … and begin to sing a hymn when the visitor was within hearing distance. The new arrival was expected to stop his team and stand beside his sled until the hymn was finished, at which time each singer would greet him with three shakes of the hand.”

What will become of the once-ubiquitous Inuit handshake when the COVID-19 pandemic ends? Will handshaking return with its previous vigour? Or will people, newly attuned to the dangers of disease transmission and possible new pandemics, adopt new rituals to greet one another? Namaste.