America caused a lasting storm at the Arctic Council ministerial, but behind the scenes an accommodation evolved 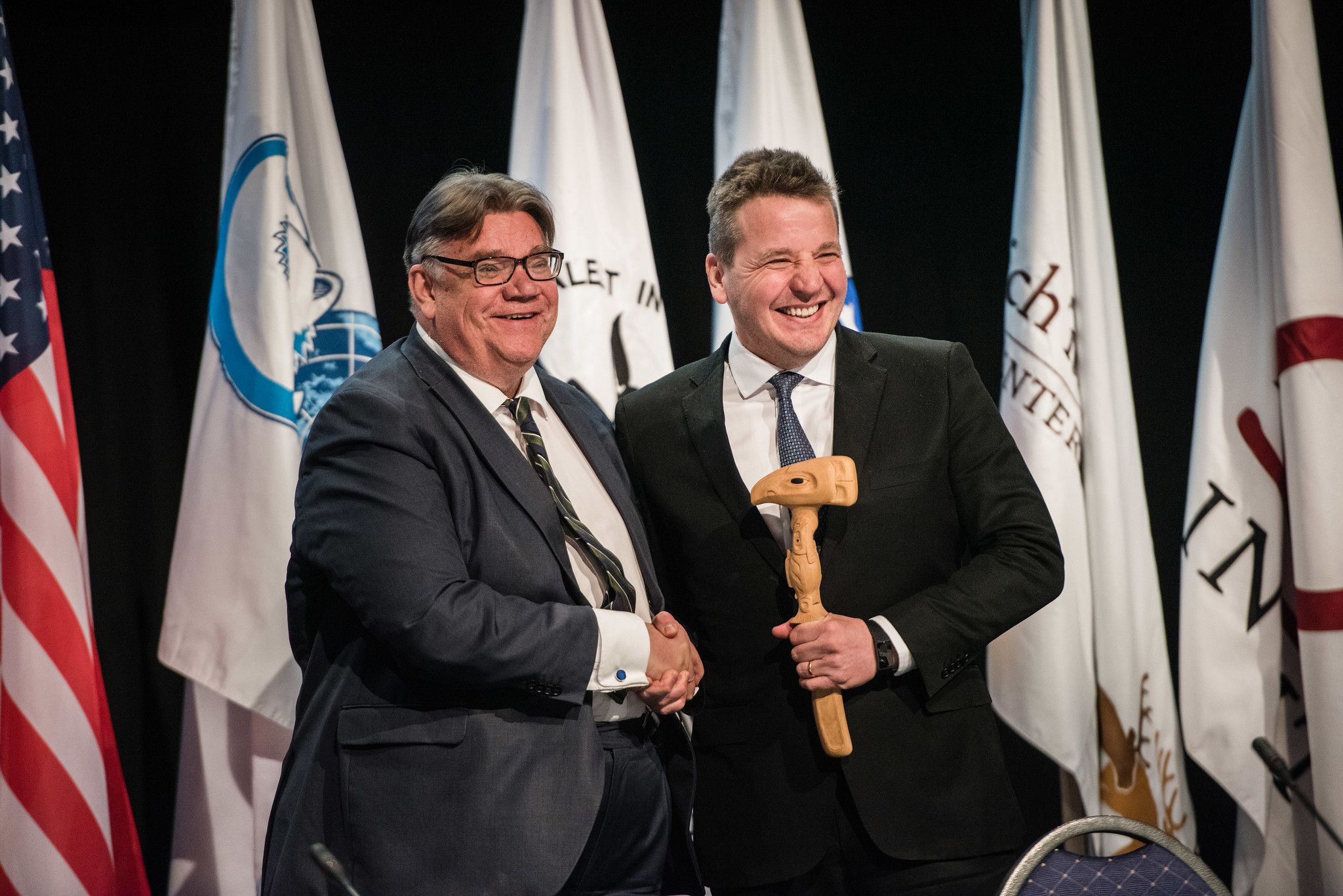 On Tuesday, the foreign ministers of the eight Arctic states, who met in Finland for a key Arctic Council meeting, failed to reach consensus on a joint declaration that was to guide the Council for the next two years.

The U.S. delegation, led by Secretary of State Michael Pompeo, would not agree to any mention of climate change in the proposed declaration, a position that proved unacceptable to the other seven nations at the table.

Less than 48 hours before the meeting, on Sunday, the U.S. reportedly presented, with no prior warning, its own suggestion for a joint text, but to little avail. The ministerial meeting came and went without a full consensus, and we now know that the Arctic states are fully unable to agree on how to address climate change, even if this is one the most pressing issues for many who live in the Arctic. Instead, the ministers signed a merger one-page joint ministerial statement, devoid of any mention of climate change and just strong enough to allow the council to continue its work.

As the dust settled, however, I began to understand why the diplomats still seemed so surprisingly calm and how the lack of a joint declaration was somewhat tempered by a swift move by the Finnish chairmanship (about which more in a moment).

At first, a number of observers in Rovaniemi reacted to the missing declaration with forecasts of doom and looming havoc for much Arctic cooperation. I was happy when, a few hours after the dramatic finale, Laura Meller, an Arctic advisor to the Nordic branch of Greenpeace, offered me another perspective:

“I think it is actually encouraging that the other seven governments put climate change first instead of finding the lowest common denominator with the U.S., no matter how little that was. If we could solve climate change by signing declarations, we would be in quite a nice spot, but we know that what really matters is how fast we can move away from the age of fossil fuels,” she said.

Which is a helping hand really, because — let me guess — most readers are probably still, like me, trying to figure out how to meaningfully interpret the avalanche of events that rolled over Rovaniemi, the main town in Finland’s Arctic region, where the meeting took place.

This was the first ever full fledged formal gathering of the foreign ministers of the Arctic to come to an end without a joint declaration. At no other stage since the 1996 birth of the Arctic Council has such division emerged; the council by default cannot make decisions without consensus. Thus, it seems clear that the Rovaniemi ministerial calls for a re-think of current conditions for Arctic cooperation, even if Meller insists on not losing perspective.

The Arctic foreign ministers meet only every second year, and it is by no means a small matter. Besides Pompeo, also Russia’s foreign minister Sergey Lavrov was there. These events are scrupulously prepared by scores of specialized diplomats and negotiations on the intended outcome this time around began more than two months in advance – some would even say they begin at the previous ministerial meeting.

The ministerial meetings also bring together representatives of all the Arctic Indigenous peoples, the so-called permanent participants, without whom no key decisions are made. Also, the observers states of the Arctic Council are there, which means literally scores of officials from Beijing, Tokyo, New Delhi, Brussels, Singapore and other capitals. Finally, there are people from observer organizations such as the World Wildlife Foundation, the World Meteorological Organization, from the six scientific working groups of the Arctic Council, its task forces, plus the media. In total, we were probably more than 200 people, not counting security, gathered in Lappi Areena in Rovaniemi, which on many other days serves as an ice hockey stadium.

Not only did this meeting fail to produce the important joint declaration. It also entirely missed another target; that of a longer term Arctic Council strategy. The work on such a strategy was set in motion at the ministerial in 2017 — in part through U.S. efforts. This strategy was long negotiated for among the Arctic nations as something that could possibly be adopted in Rovaniemi as a tool to sharpen the focus of the Arctic Council and provide ground for new initiatives and ambitions. The whole idea was put on hold, though, some time prior to Rovaniemi when it became clear just how adamant the U.S. was that no recognition be made of climate change and its impacts in the Arctic, nor that any joint efforts to counter the challenge would meet Washington’s approval. 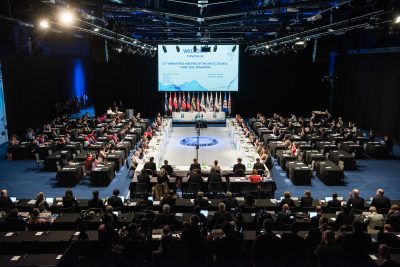 Such internal division is of course remarkable. But perhaps even more telling was how the Rovaniemi meeting got framed by an unexpectedly confrontational speech made by Pompeo on Monday afternoon. The secretary’s address was announced just days prior to Rovaniemi and it was not formally a part of the ministerial meeting. But it was made at Lappi Areena, the same location used for the ministerial, in front of TV cameras from all over the world and only hours before the ministers were to meet for their formal dinner and subsequent talks.

Pompeo’s speech came to be, so to speak, part of the assembled package and like the absence of a joint declaration it spelled out in a language quite foreign to the consensus-oriented Arctic Council how the world view and policies of President Donald Trump’s administration are now making a real difference in the Arctic.

Outi Snellman in particular made me aware of this. Snellman is vice president and head of the Rovaniemi-based international secretariat of the University of the Arctic, or UArctic, a collaborative organization embracing some 203 universities all over the world. Snellman has been instrumental to Arctic cooperation from the very beginning in the early 1990s as it all started — in Rovaniemi.

Building on a historic 1987 speech in Murmansk by then leader of the Soviet Union Mikhail Gorbachev, who asked for the Arctic to be transformed into a zone of peace, science and cooperation as the Cold War was ending, representatives of the Arctic states, including the Soviet Union, crafted the so-called Rovaniemi Declaration and kick-started a process of joint efforts on environmental protection, science and other collaboration in the Arctic. This was dubbed the Rovaniemi-process and later evolved into the Arctic Council.

Fast forward to Pompeo’s speech in May 2019. Somini Sengupta of the New York Times wrote an account from Lappi Areena aptly headlined “United States Rattles Arctic Talks With a Sharp Warning to China and Russia.” The following are excerpts:

“Secretary of State Mike Pompeo on Monday sharply warned China and Russia against “aggressive” actions in the Arctic, while resisting a diplomatic push by other countries in the region to avert the worst effects of climate change.

“This is America’s moment to stand up as an Arctic nation,” Mr. Pompeo said. “The region has become an arena of global power and competition.”

Mr. Pompeo was particularly pointed in his remarks on China, which has observer status at the Arctic Council, warning that Beijing’s efforts to build infrastructure in the region and partner with Russia on new sea routes could risk turning the Arctic into another area of competing territorial claims, like the South China Sea. “China’s pattern of aggressive behavior elsewhere will inform how it treats the Arctic,” he said.

The speech was strong on warnings against China’s rising presence in the Arctic and against Russia’s military build-up in the region, and on Tuesday afternoon, Snellman was still bewildered:

“I think the governments will have to chew on this for a while,” she said.

“Gorbachev’s speech laid the foundation for this region as a region of peace and collaboration. It has served as a strong guarantee for peace. This is the first time that the language Pompeo voiced has entered the discussion of the Arctic Council. Pompeo did not focus on the possibilities for fruitful collaboration but on possible conflict,” she found. She reminded me how the Arctic Council was nominated for the Nobel Peace prize only some 15 months ago; something which is now unlikely to happen again soon.

Another veteran of Arctic cooperation, Timo Koivurova, director of the Arctic Centre of the University of Lapland in Rovaniemi, told me that he did not expect the lack of consensus on climate change to cause much impact in the short term to the practical work of the Arctic Council.

“It is the long term impact that I am worried about,” he said only minutes after the end of the ministers’ meeting.

“If Trump is reelected in 2020 and this administration just keeps on going, I think we will have serious challenge within the Arctic Council. So much of the work of the Arctic Council stems from climate change and its consequences, and if that is a no-go area… now that’s what I am worried about,” he told me.

However, like other experts, Koivurova also stressed the importance of a document that emerged as a result of very last minute behind-the-doors dealings. This document was put forward by the head of the ministerial meeting, Finnish foreign minister Timo Soini, simply as a Statement from the Chair. This is not a format commonly part of the outcome of an Arctic Council ministerial but the document nonetheless soon appeared on the Arctic Council’s website very much as a result of the meeting.

And here is point: The Statement from the Chair contains everything that most would have expected from a formal declaration from the Rovaniemi meeting. Here are long and heavy paragraphs on the challenges that climate change brings to the Arctic. Here are recommendations on biodiversity, black carbon emissions, sustainable development, science cooperation, preservation of wetlands and scores of other subjects key to the work of the Arctic Council. One paragraph shows how the disagreement on climate change was handled:

“A majority of us regarded climate change as a fundamental challenge facing the Arctic and acknowledged the urgent need to take mitigation and adaptation actions and to strengthen resilience and welcomed the outcomes of the UNFCCC COP24 in Katowice, including the Paris agreement work programme,” it reads.

The document also spells out how the eight Arctic nations agreed on a new mechanism to coordinate work within the Arctic states on marine issues. Things are moving forward.

The statement was signed only by Timo Soini, Finland’s foreign minister, the chair of the meeting, not by the rest of the ministers. But it would obviously not have passed as a formal part of the outcome of the ministerial without the consent also of the U.S. delegation and Secretary Pompeo.

The U.S. in Rovaniemi demonstrated its refusal to take part in any real climate change work in the Arctic, just as it has opted out elsewhere — for instance by refusing to take part in negotiations prior to the UN climate summit in New York in September and by dislodging from the Paris accords.

But a level of accommodation, something close to a compromise, was established as the U.S. implicitly recognized basically everything else that goes on within the Arctic Council.

“The U.S. was very much alone in this,” Koivurova surmised afterwards.

“The lack of a declaration is very unfortunate, very symbolic. But we still have the Joint Ministerial Statement and the Statement from the Chair. There you will find all that is needed to continue the work of the Arctic Council”, he said.

Martin Breum is a Danish journalist covering Arctic affairs, based in Copenhagen.