‘They’re not my stories, but belong to the many Inuit I spoke to,’ says author David Pelly 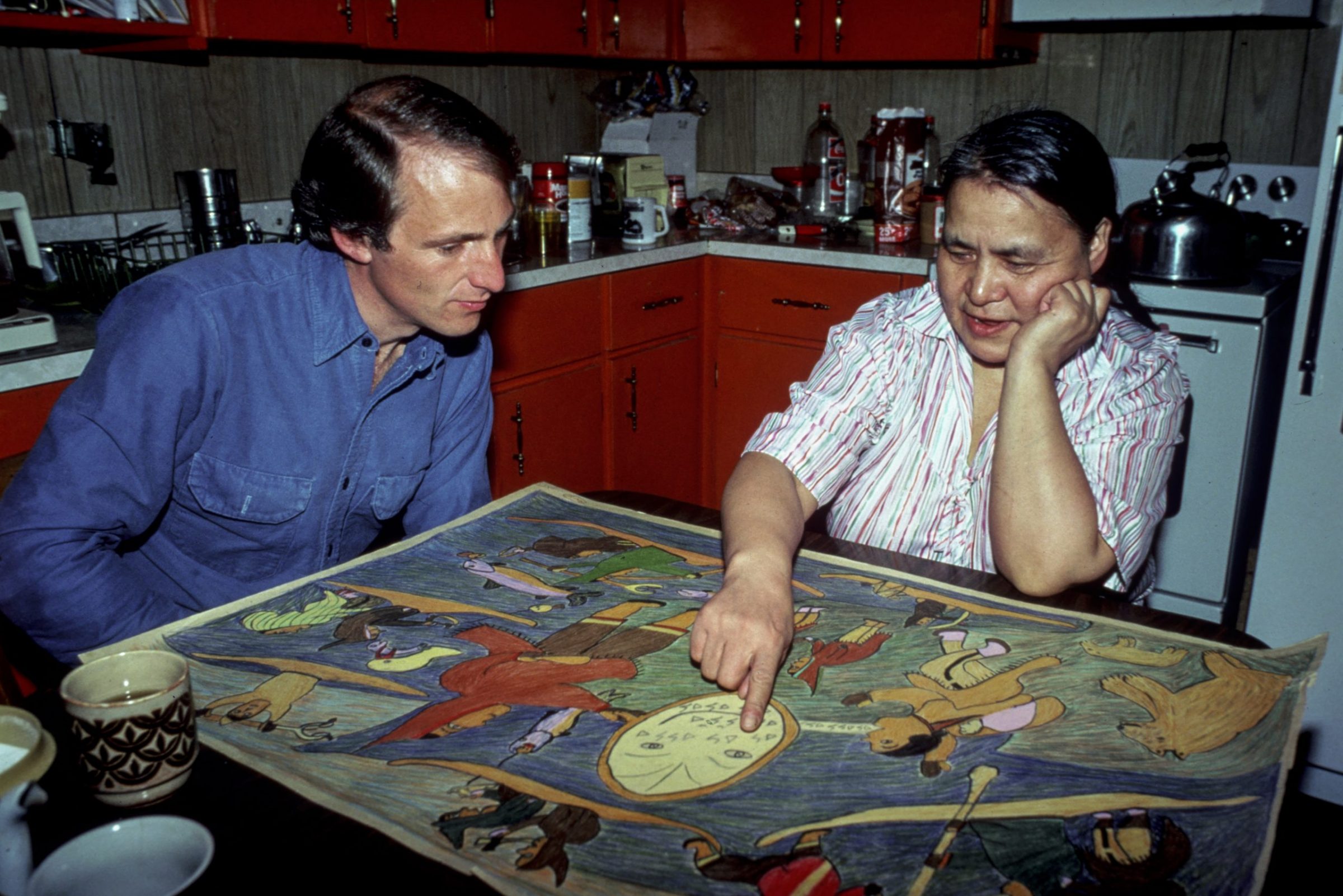 Ruth Annaqtuusi Tulurialik and David Pelly work at her kitchen table in Baker Lake in 1984. Pelly says Tulurialik taught him how to collect oral histories. (Photo courtesy of David Pelly)

David Pelly says he’s learned a lot from Inuit over his 40 years in the North.

Now the writer and compiler of oral histories is sharing some of these stories in his new book, The Ancestors are Happy.

One of those stories is about a time he was riding a snowmobile in a whiteout with his companion, Tulurialik, of Baker Lake, when they came upon a rock.

“‘I remember that rock,’ he assured me,'” Pelly recounts in the book.

“Then he wheeled the snowmobile around and headed back at an acute angle to our last course. I didn’t see our iglu emerge from the total whiteout until he came to rest beside it.”

This led Pelly to dig deeper into how Inuit perceive the land, he told Nunatsiaq News. 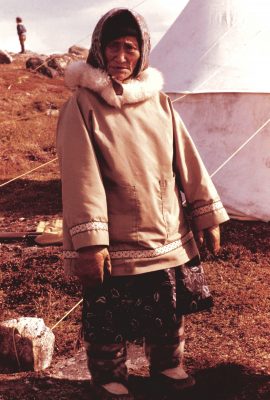 Iquginnaq, the survivor of many ordeals, stands in 1982 at her family’s camp beside Ferguson lake, southeast of Baker Lake. (Photo courtesy of David Pelly)

Pelly’s book also includes harrowing tales of survival, such as that of Iquginnaq, which, he told Nunatsiaq News, is “why there is a book today.”

Not long after arriving in Baker Lake in the early 1980s, Iquginnaq recounted her life to Pelly — one full of hardship and physical abuse from many men.

At one point, Iquginnaq said she was so despairing, she shot herself in the abdomen.

A shaman saved her life, she told Pelly, but she lived under a taboo: that she was never to prepare caribou meat on the bone.

“It was a difficult life. But even with all the bad luck, I’m the only one of three sisters to still survive,” she told him.

Pelly didn’t take notes while Iquginnaq was speaking through a family member’s interpretation. Instead, he said he concentrated on every word and dashed back home to write up what she had said.

That was the beginning of his recording of powerful oral histories from Inuit.

Iquginnaq’s story is in The Ancestors are Happy, but the book’s title comes from what a Cambridge Bay elder told Pelly 20 years ago, after the 2001 launch of Pelly’s book about the relationship between Inuit and the seals they hunt.

Frank Analok, then the oldest of Cambridge Bay’s elders, told Pelly “the ancestors are happy” to see that knowledge preserved. 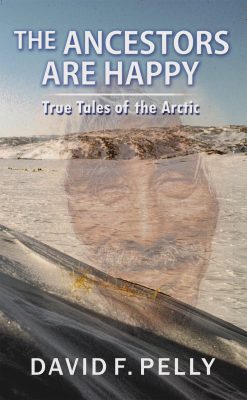 The cover of “The Ancestors are Happy” features a photo of author David Pelly’s mentor, the late Mannik of Baker Lake. (Image courtesy of David Pelly)

The Ancestors are Happy includes chapters devoted to some of the many people Pelly became close to over the years, including the elder Mannik of Baker Lake, who called Pelly his tiguaq, or adopted son.

The book recounts a time Pelly was out hunting for caribou north of Baker Lake with Mannik.

“Suddenly, without comment, he lay down flat on the tundra, and pressed his head to the ground,” Pelly wrote.

“He could hear the caribou, he said. I tried it and, of course, he was right. In a sense, the land spoke to us, and we found the caribou needed to feed his family. In my multiple hunting trips with Mannik, he never once failed in that regard.”

Pelly first visited the North as a canoeist in 1977, and, starting in the 1980s, spent most of his life in the North, living for some years in each of Baker Lake and Cambridge Bay.

He supported himself in the North by writing for publications like Canadian Geographic, and by publishing books — 12 to date, as well as doing contracts to collect oral history from Inuit elders.

After meeting his wife Laurie, long-time lawyer for Nunavut Tunngavik Inc., in 1989, Pelly moved to Cambridge Bay, where he continued to listen to elders’ stories.

Sometimes, though rarely, Pelly said he heard criticism about taking down these stories, but never from Inuit — “only from Qallunaat,” or white people.

Manitok Thompson, a former Nunavut cabinet minister and the current president of the Inuit Broadcasting Corp., has praised Pelly saying he is “one guy who has learned to talk to our elders and listen to stories.”

“They’re not my stories, but belong to the many Inuit I listened to, starting in the early 1980s, and those who came before and after,” Pelly told Nunatsiaq News.

“The Ancestors Are Happy: True Tales of the Arctic”