‘I wanted to show what our land really looks like,’ says photographer Lucasi Kiatainaq 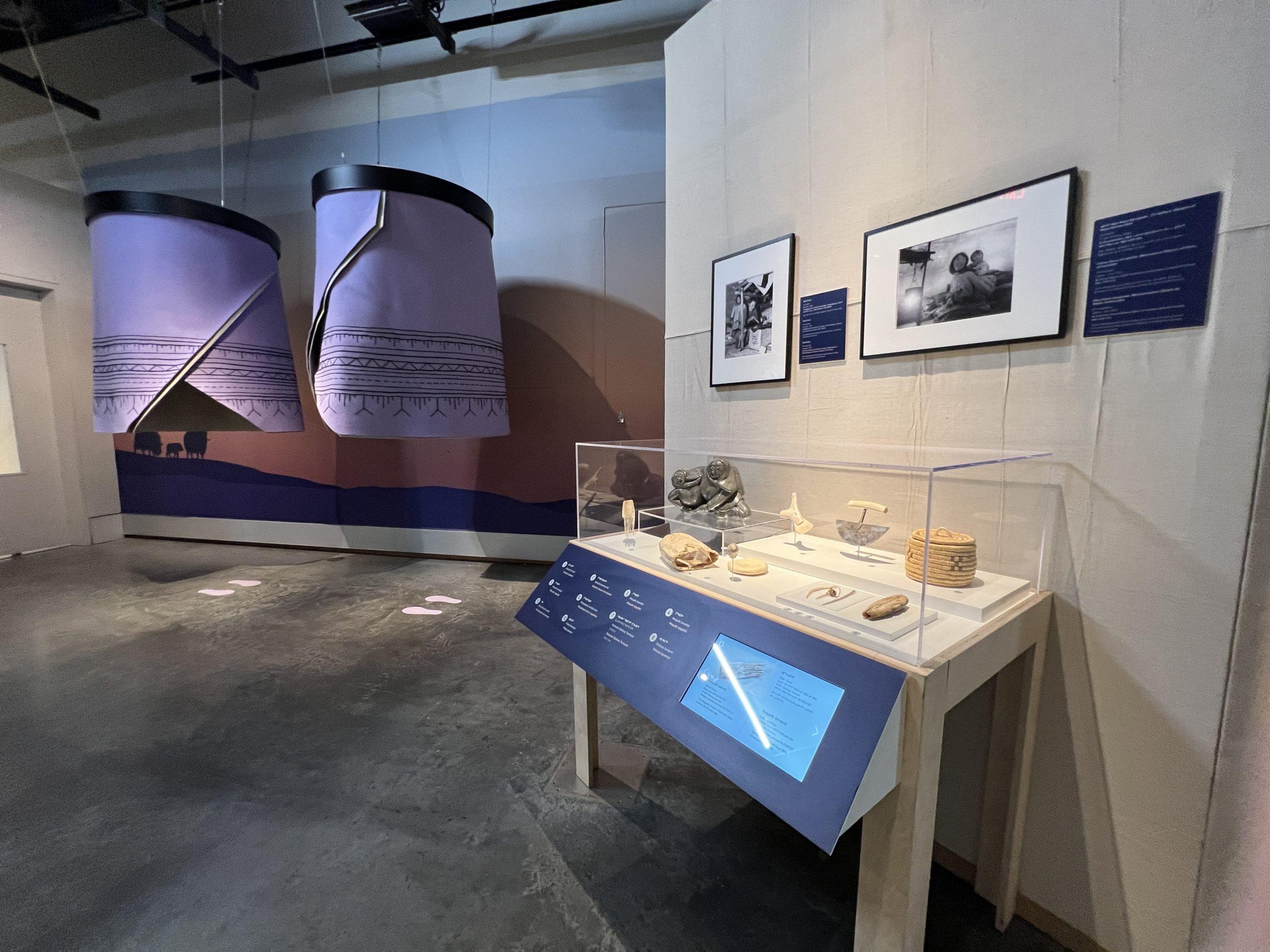 A new exhibition at the Canadian Museum of Nature in Ottawa, developed by Avataq Cultural Institute, reveals perspectives on Quebec’s Nunavik region through the work of Inuit artists. The exhibition runs until October 2024. (Photo by Pierre Poirier)

Emerging young Nunavik artists are getting the chance to step into the spotlight as part of a new exhibit titled Our Land, Our Art, featuring original art pieces inspired by Inuit cultural history.

The exhibit, developed by Quebec-based Avataq Cultural Institute, is presented at the Northern Voices Gallery in the Canadian Museum of Nature in Ottawa.

Among the five specialty art installations included are works by members of the circus troupe Tupiq A.C.T., who come from Nunavik and the greater Montreal area. 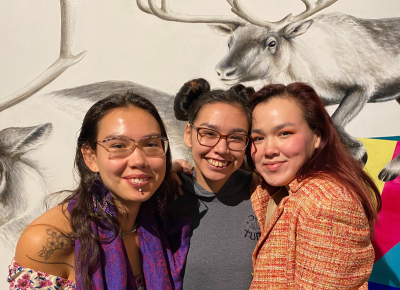 From left, Mariam Imak, Minnie Ningiuruvik and Mina Maina Tukai, members of Tupiq A.C.T., at the exhibition at the Canadian Museum of Nature. (Photo by Andrea Sakiyama Kennedy)

Caroline Lanthier, project manager at the Canadian Museum of Nature, said the Northern Voice Gallery is a unique space with rotating exhibits intended to highlight the life and culture of northern communities.

“This is a way to link the north and the south,” she said.

Our Land, Our Art is the gallery’s third installation since its official opening in 2017.

Lanthier said the concept called for the artists to reflect their community and relationship with the land for gallery visitors who are unfamiliar with Nunavik.

Tupiq A.C.T. members Minnie Ningiuruvik, Mina Maina Tukai, and Mariam Imak said being invited to participate in the exhibit was an honour.

The three performers, all from Nunavik, currently call Montreal home after moving there to access training, supplies and opportunities as professional circus performers.

In an interview at the gallery a few days before Dec. 2 public opening, the three shared their plans for pursuing careers in the arts and made it clear that reflecting their Inuit culture and heritage would always be a priority.

Tupiq’s art installation is a short-film presentation of a performance inspired by the troupe’s interpretation of the James Bay Northern Quebec Agreement.

Signed on Nov. 11, 1975, the agreement is a land claim settlement between the Cree and Inuit of northern Quebec and the federal government. 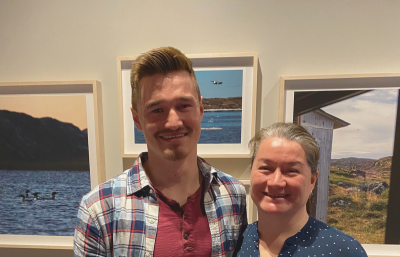 Lucasi Kiatainaq with his mother, Christina, in front of his photographs featuring moments inspired by Inuit life in Nunavik. (Photo by Andrea Sakiyama Kennedy)

Imak, 22, said the film shares the history of the region, particularly to those who were not born at the time negotiations were held.

“It is very important for the youth to be engaged with the [agreement] particularly with the illusionary ownership of land,” said Imak, “and what that means now for us as Inuit youth, and what that will mean for the next generations when it comes to the land and our relationship to it.”

Kiatainaq acknowledges photography isn’t a traditional Inuit art form, but said he uses his photos to reflect the colour and beauty of Inuit culture by showcasing people and animals living their everyday lives in the Nunavik natural environment.

“I wanted to show what our land really looks like,” he said, while standing next to a soapstone carving that served as his creative inspiration.

Kiantainaq, who is currently living and studying in Montreal, often features his family harvesting and hunting in his photography, as well as the landscape and wildlife around his family cabin in Nunavik.

“He shows our everyday life,” said Christina Kiatainaq, Lucasi’s mother, who joined him in Ottawa for the exhibit. “We love to be on the land where we can really breathe.”

Accompanying her son to the exhibit, and to the gala that was attended by Gov. Gen. Mary Simon, was exciting and a bit overwhelming, she said.

Kiatainiq said he considers his participation in the exhibit a turning point, a game-changer, for his future as a professional photographer. 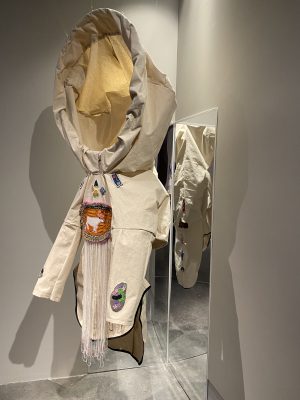 Inspired by themes of the environment and ancestral connections to the land, Taqralik Partidge’s work, a beaded amautik, addresses life in the North as well as southern urban centres. (Photo by Pierre Poirier)

“There’s only good things that will come out of this exhibition, and I am so excited for the future.”

The exhibit runs until October 2024, and access is included with general admission.