A mixed-up waterbird was found stunned and cold in Igloolik, after wandering far from its usual migration path 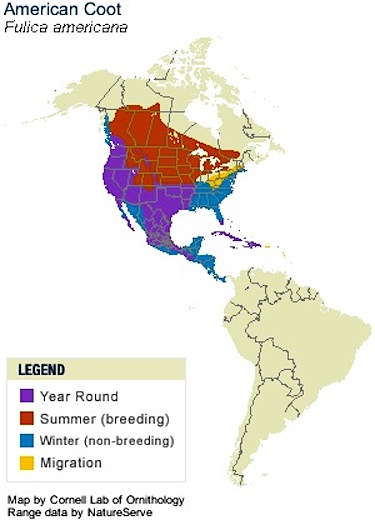 This map shows the usual range of the American coot. (MAP COURTESY OF THE CORNELL LAB OF ORNITHOLOGY) 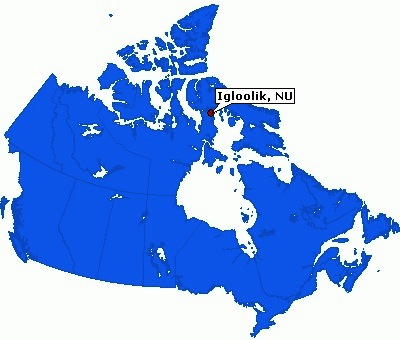 This map shows the location of Igloolik, far north of the usual range of the American coot. (FILE IMAGE) 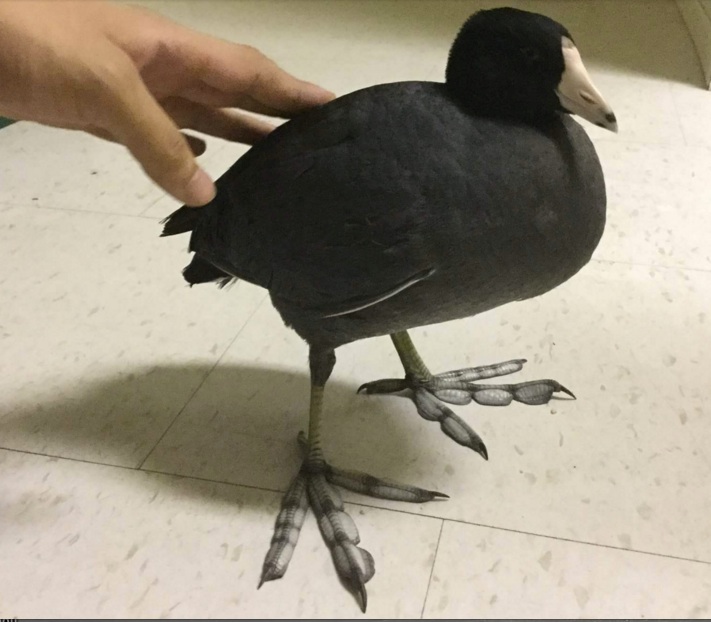 A long way from home: this American coot ended up in Igloolik earlier this week, prompting Richard Amarualik to post a photo of the bird on Facebook to help identify it. (PHOTO COURTESY OF R. AMARUALIK)

A stranger from the South turned up in Igloolik this week, half-frozen.

A small bird with a white beak, black body and lobed toes on its feet was found near the house of Richard Amarualik’s neighbour.

That’s after the bird apparently lost its way to its usual wintering-over grounds far away to the South.

“It doesn’t seem to be injured, and was thought just to be cold,” said Amarualik in a Facebook posting, in which he asked for help finding out what the odd-looking bird was.

Many identified the bird on Facebook as an American coot, described by the Cornell Lab of Ornithology as a plump, chicken-like bird with a round head and sloping bill.

The coot sighting so far north may be a record, said ornithologist Kevin McGowan from the Cornell Lab.

“It’s pretty unusual,” he said in a telephone interview from Ithaca, New York. He called the coot a “funny looking thing.”

There have been previous coot sightings in southern Nunavut, and McGowan said any migratory bird in the world has the capability to end up anywhere, as they can fly thousands of kilometres.

The coot may have been travelling south from Alaska, but “if you get your orientation wrong you find yourself way off course.”

In the past, coots have been sighted as far away as Iceland and Scotland.

The bird found in Igloolik was likely blown off course by winds or had issues with homing in on the magnetic waves that usually guide birds on their migrations.

Bird experts call that phenomenon “vagrancy,” when birds, instead of heading to their usual wintering grounds, take a wrong course and migrate through areas that are not on their normal path.

The most extreme wandering involves a kind of reverse migration, when birds actually head in the opposite direction. This has sometimes produced sightings of Siberian passerines, which normally winter over in southeast Asia, in northwest Europe.

Amarualik told Nunatsiaq News that the coot, after warming up, was released.

McGowan said the bird would be unlikely to survive, because it usually seeks out fresh, open water and “he’s so far off course.”

That would keep the bird, which McGowan said was an adult, out of the gene pool, which selects for coots who migrate successfully.

“Only the ones who figure it out get to leave offspring,” he said.

Some on Facebook suggested that the coot might have made a good meal, but McGowan said coots have “a reputation as tasting kind of muddy.”