Awa back in as Nunavut’s devolution negotiator 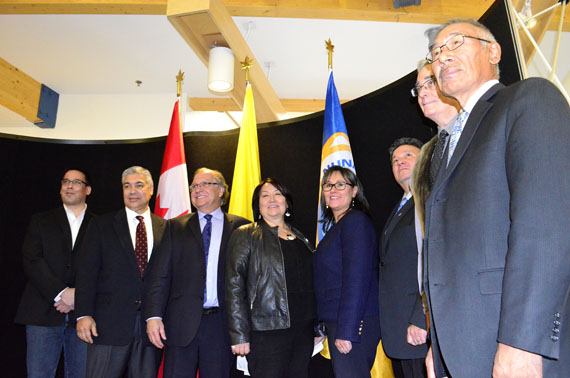 Simon Awa, far right, is back on as Nunavut’s chief negotiator for devolution. He’s pictured here with members of the negotiating team in October 2014, shortly after he was first appointed to the role. (FILE PHOTO)

As part of sweeping changes to some of the Government of Nunavut’s most senior roles, the territory’s new premier has appointed a new—albeit returning—chief negotiator of devolution.

The territory’s chief negotiator works with a counterpart appointed by Ottawa to map the process of transferring control over land and resources from the federal government to the Nunavut government.

“I am confident that Mr. Awa is the best individual to lead this process for the GN,” Savikataaq said in the June 19 release. “His work on this file over the past four years has been invaluable.”

Just last week, Paul Quassa, in one of his final acts as premier, named former premier Paul Okalik to the job, just days before Quassa was ousted from his position following a non-confidence vote.

After Savikataaq came on as premier, he announced new cabinet portfolios June 15 while also announcing the removal of Okalik as negotiator, though he did not offer an explanation for the sudden change.

Awa returns to a role he was first appointed to in 2014. Previously, Awa has served as deputy minister of environment and of culture and heritage.

The most recent set of devolution talks re-started in late 2016 with federal negotiator Fred Caron, though the GN has not reported any progress since then.

Since December 2016, the devolution negotiation parties, which include the Government of Nunavut, Nunavut Tunngavik Inc. and the federal government, have held 12 rounds of negotiations and established several working groups, the GN said.

Caron has said an agreement in principle must be reached by the end of 2018 in order for the federal cabinet to have time to approve the deal ahead of the 2019 federal election.

The GN is working to this end, the premier’s office said on June 19.

The next negotiation session will be hosted by NTI in Cambridge Bay from July 24 to July 26.