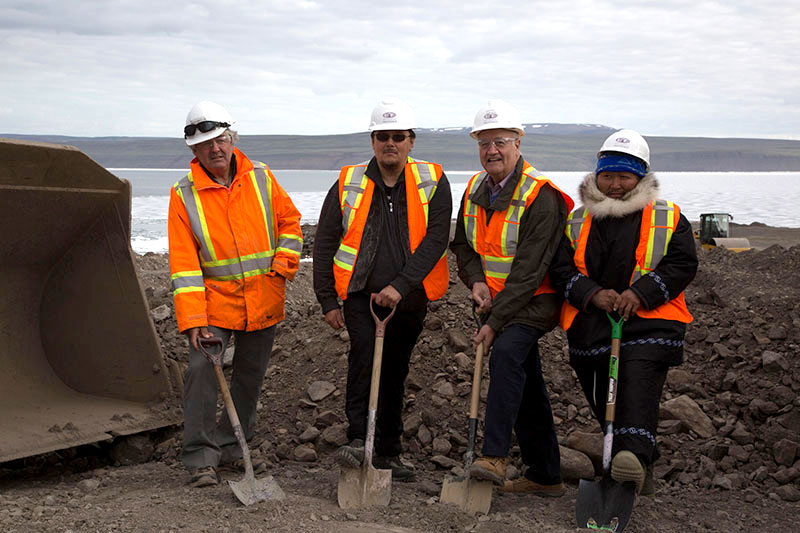 The associate defence minister, Julian Fantino (second from right), at an “official groundbreaking” for the Nanisivik naval station held July 15. The defence department did not identify the other people in the photo. (DND HANDOUT PHOTO)

Five years after its original start date, construction began this past June on the federal government’s $130-million naval refueling station at Nanisivik, the Department of National Defence said July 17.

To mark the project, Julian Fantino, the associate defence minister, slipped into Nanisivik July 15 for a low-key “official groundbreaking” and photo at the construction site.

The defence department said 2015 is the first full season for construction of the naval station — work that was supposed to start in 2010..

The long-delayed project, according to the 2013 federal budget, will cost $116 million, for “design, construction, geotechnical and environmental studies, various contingency and allowances, inflation, travel, and other project management costs.”

On top of that, the department spent $14 million prior to 2013 on site studies, project management, and design, for a total of $130 million.

That means that with tax, the total cost is now $146 million, the defence department said.

As part of that spending, in June of 2014, the federal government awarded a $55.8-million construction contract to an Iqaluit-based company called Almiq Contracting Ltd.

Almiq is a partnership between Johnny Mikijuk of Iqaluit and a Quebec-based firm called Laval Fortin.

After doing preparatory work last year, Almiq now operates a construction camp at Nanisivik that hosts between 50 and 60 workers.

The defence department said the project involves the construction of new fuel storage tanks, buildings, and repairs to the existing deep water port, which once served the Nanisivik lead-zinc mine.

Under the original plan, which Prime Minister Stephen Harper announced Aug. 10, 2007 Ottawa would have done a major upgrade to an old dock once used by Breakwater Resources Ltd. for shipping ore out of its now-defunct Nanisivik lead-zinc mine.

However, in 2012 Ottawa dumped the jet strip and downsized the project to a summer-only gas station for Ottawa’s fleet of Arctic offshore patrol ships, which are now under construction, as well as other vessels.

The federal government first predicted the Nanisivik station would be up and running by 2013.

But the defence department now says the naval facility won’t start operating until 2018.