“We will be insulated from the iron ore price” 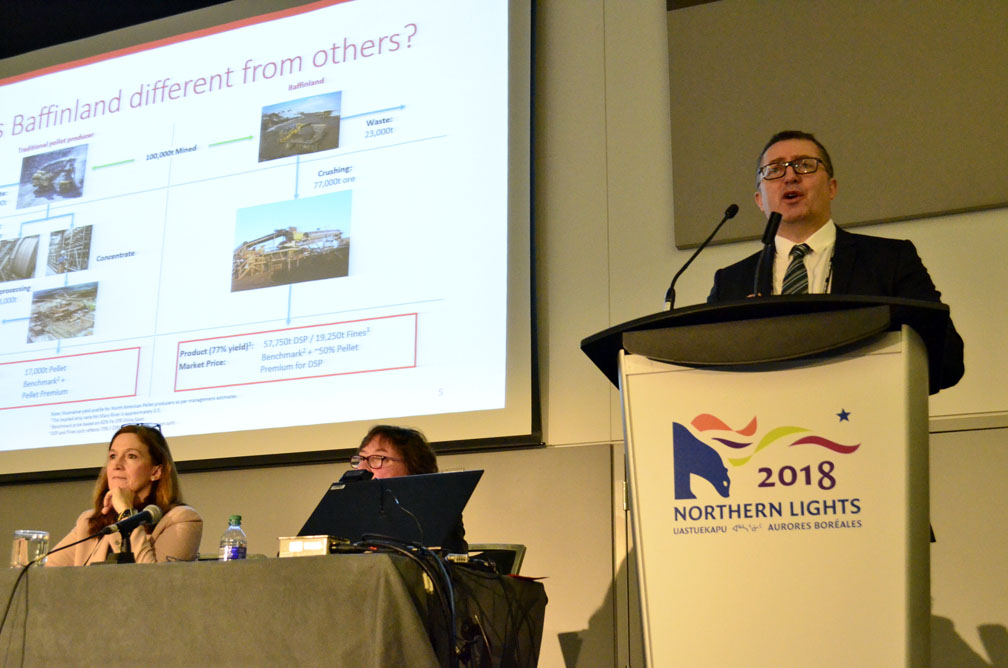 Brian Penney, the CEO of Baffinland Iron Mines Corp., said an expansion of production from 4.2 million to 12 million tonnes of iron ore per year, with a railway to Milne Inlet, would guarantee the Mary River mine’s existence for the next 100 to 150 years. (PHOTO BY JIM BELL)

“We will be insulated from the iron ore price,” Penney, the company’s CEO, told delegates at a mining industry panel held during the Northern Lights trade show in Ottawa.

That’s because the Mary River ore body, where a range of hills hold massive quantities of ore that are around 65 per cent pure iron, the greatest degree of purity that the laws of chemistry will allow, might be the richest iron ore deposit on the face of the earth, Penney said.

It also means the company doesn’t have to do any smelting on site to extract iron, which means they produce no tailings. They simply crush the raw ore into pellets and powder, and then ship the raw material to European steel makers.

But to make the project work economically in the high-cost North Baffin region, they need to increase the volume of ore they ship to those customers from the current limit of 4.2 million tonnes per year.

“When we expand to 12 million tonnes a year, our unit cost would decrease by half,” he said.

That’s why Baffinland, in October 2014, proposed the first version of its Phase 2 expansion scheme.

At that time, the global price per tonne of iron ore had been dropping like a stone, due to falling demand in China and cheap new sources of supply in Brazil and Australia.

They changed the Phase 2 plan later to propose replacing their tote road to Milne Inlet with a railway. The company would eliminate its fleet of haul trucks and instead use five locomotive engines and 176 rail cars.

The company also dumped the idea of through-the-ice shipping to and from Milne Inlet in the early winter months from its Phase 2 proposal, but they do plan to build a new dock at Milne Inlet and a larger stockpile able to hold 7.8 million tonnes of ore, Penney said.

Baffinland is still permitted, under a project certificate they received in 2012, to build a railway south to a port at Steensby Inlet, but Penney said that plan is too costly.

As for the Milne Inlet port and railway plan, that would require an investment of about $900 million, Penney said.

And he said if regulators say yes, Mary River’s existence would be guaranteed for up to 150 years.

“This is a multi-generational operation that would be around for more than 100 years,” Penney said.

But since 2014, the Mary River Phase 2 proposal has seen so many significant changes, regulators want a land use plan amendment before the project gets an environmental assessment.

Right now, it still sits before the Nunavut Planning Commission, which must recommend whether the North Baffin Regional Land Use Plan should be amended to provide for a transportation corridor that accommodates Baffinland’s proposed railway.

A local hamlet committee in Pond Inlet is opposed to that railway, and said so in a news release late last year, declaring that the idea may be “dead in its tracks.”

But Penney told Northern Lights delegates that he expects the NPC will recommend approval of the land-use plan amendment this March.

And after that, the project can move onto the Nunavut Impact Review Board, which would scrutinize its environmental and socio-economic impacts and make a recommendation to decision-making federal cabinet ministers.

“It’s delayed us, but in March we expect a positive decision,” Penney said of the planning commission process.

Another problem is that the proportion of Inuit employed at Mary River dropped to only 12.5 per cent last year, less than 100 people and far short of the 25 per cent target that Baffinland and the Qikiqtani Inuit Association had agreed to in their Inuit impact and benefit agreement.

“It’s been a struggle,” Penney said.