“It’s not only at the leadership level; it is everywhere” 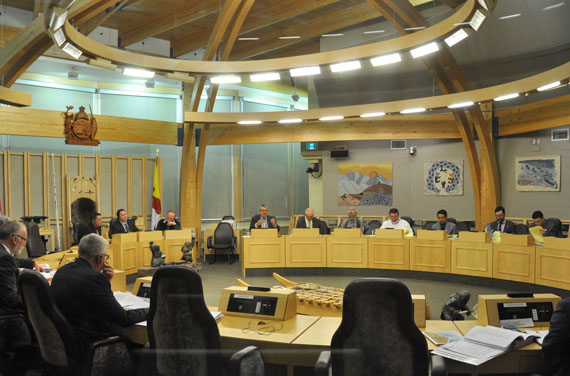 Nunavut Premier Joe Savikataaq said his government will review its harassment policy to offer better support to Nunavummiut women who have faced sexual harassment or abuse in the workplace. (PHOTO BY SARAH ROGERS)

Nunavut Premier Joe Savikataaq said his government will review its harassment policy to offer better support to Nunavummiut women who have faced sexual harassment or abuse in the workplace.

Savikataaq’s pledge comes in response to remarks Iqaluit Mayor Madeleine Redfern made to a House of Commons hearing last month about the abusive behaviour of Inuit leaders.

Redfern spoke to the Standing Committee on the Status of Women hearings on Sept. 26, during a session called Barriers Facing Women in Politics.

The discussion among MPs and witnesses that afternoon was about women who are interested in politics and how they often start their careers working as staffers to politicians. But so many face abuse in those positions, they quit before they even have a chance to run for public office, the committee heard.

“When our Inuit male leaders travel with the female staff, they think it’s a benefit and a perk that they can actually sexually harass, sexually assault or have relationships with women on the road,” Redfern told the committee.

Not long afterwards, Redfern started to receive messages on social media from Nunavut men who felt her comments referred to all men in leadership roles.

She then emailed the committee to clarify that she had meant “some” Inuit male leaders behave that way.

“Under no circumstances do I think that all our leaders have acted that way,” Redfern said. “I was not targeting all men. But the ultimate goal of making these comments is that, when you’re a leader, you’re held to a higher standard and we should not abuse our positions of power.”

Since then, Redfern said she has received an onslaught of comments, some supportive, others threatening.

Some people have made death threats, she said, like suggesting she “watch her back” and not go out alone.

“Overwhelmingly, the comments I’ve received … have been to say that, of course, [abuse] happens, and it shouldn’t,” she said.

“What’s important is that we’re now having this very difficult conversation.”

In an interview with CBC earlier this week, Nunavut Premier Joe Savikataaq said he disagreed with Redfern’s comments at the hearing, and said he wasn’t aware of issues of harassment within the Government of Nunavut’s workforce.

But the premier switched gears on Oct. 11 in a statement put out for the International Day of the Girl, in which he committed the GN to reviewing its harassment policy.

“In a time where we are seeing a collective movement to bring injustices inflicted on women and girls to the forefront, I encourage these conversations to take place in the territory,” Savikataaq said.

“I pledge to support and gain more knowledge and understanding of the disadvantage women and girls face every day, simply based on their gender,” he said.

“I also commit to reviewing the current Government of Nunavut harassment policy, to ensure supports and resources are in place for any women who feel they have experienced inappropriate behavior or sexual harassment.”

The premier’s office said the review would be conducted under a soon-to-be created department of Human Resources.

The GN’s current policy spells out definitions for sexual and personal harassment and the process for filing a complaint.

But Redfern said that policy doesn’t go far enough, pointing to one GN employee’s complaints of sexual harassment and inappropriate touching over a seven-year period.

The problem is not confined to within the territorial government. This week alone, Nunatsiaq News reported on assault charges facing the mayor of Baker Lake and the chair of Qikiqtaaluk Corp.

“We need stronger language and definitions around what harassment is, including sexual harassment and assault, so there’s no ambiguity,” Redfern said, “so if someone is attending a meeting out of town or an evening, that they are protected.”

Those policies should all be extended to elected officials, she added.

“When your abuser is in a position of power, it’s that much harder to come forward,” she said.

Pauktuutit Inuit Women of Canada weighed in on Oct. 11, issuing a statement urging governments and policy-makers to do more to prevent and respond to violence and abuse against Nunavummiut women.

“Violence against women and girls is not just a woman’s issue: it is everyone’s issue and affects entire communities,” said Pauktuutit President Rebecca Kudloo in the release.

“I have personally worked on cases of abuse by clergy in my own community,” she said. “Violence and abuse should never be tolerated, at any level of society. It’s not only at the leadership level; it is everywhere.”

Pauktuutit offers a list of resources for victims of abuse in Nunavut through its Believe-Ask-Connect campaign.