“How can you send a young child away for surgery without their parent?” 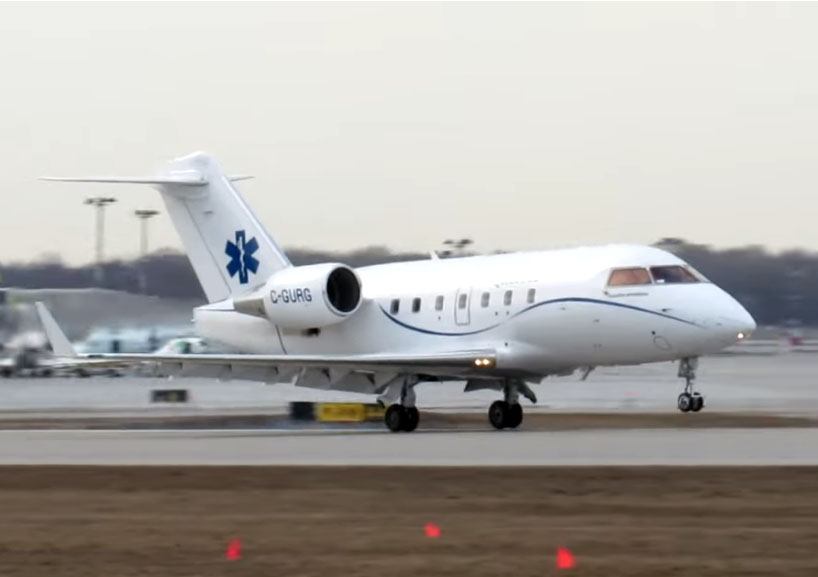 Quebec’s Challenger jet air ambulance lands in Montreal. A group of doctors has written to the province to ask it to change its policy that prevents parents from accompanying their children aboard the aircraft. (FILE PHOTO)

Inuit families in Nunavik are facing the ongoing “fear and pain” of a policy that prevents parents from accompanying their sick or injured children to Montreal hospitals on the province’s air ambulance service.

That’s the point a group of Montreal pediatricians hope to make in a letter penned to the province’s air ambulance agency, Évacuations aéromédicales du Québec, or ÉVAQ, as well as Quebec’s health and transport ministers.

Quebec’s mobile intensive care unit is housed in a Challenger jet, which the province says is only equipped to accommodate patients. That policy has been in place for decades and applies to any region in Quebec that uses the service.

But the December letter, written by Montreal physicians Samir Shaheen-Hussain, Harley Eisman and Saleem Razack, says that residents of Nunavik are bearing the brunt of that rule.

“We have serious concerns about the children being transferred by Challenger aircraft who do not benefit from any accompaniment,” said the French-language letter.

“The Inuit population is particularly affected by this practice.”

In 2016, the Challenger air ambulance flew 116 children from Nunavik to Montreal for care, and about half that number in 2017.

Nunavik parents must take separate commercial flights to join their children in Montreal, a trip that can take several days from Quebec’s most northerly region.

The Montreal doctors said the absence of a parent can put the child’s wellbeing at further risk even in the hospital.

They noted a recent case where a young girl fled her hospital room in an effort to return home; another incident involved a toddler falling from its crib.

The three doctors said that they and other health care professionals are often unable to make complete assessments of young patients transported from other regions, often because the young patients speak Inuktitut only.

“Our colleagues have, on a number of occasions, reported a feeling of helplessness and indignation when seeing a child alone, crying so inconsolably simply out of fear or pain and not have a parent to comfort them,” the letter said.

“We urge you… to consider the situation described and take the necessary steps to develop policies to allow ÉVAQ to offer parents the option to accompany their children.”

Since various Quebec media organizations began to report on the issue earlier this week, Quebec’s health minister, Gaétan Barrette, has said the province will consider changes, but he noted the Challenger jet is not configured for extra passengers.

It’s unclear what support the Nunavik Regional Board of Health and Social Services offers Nunavimmiut Inuit children who are in Montreal awaiting their parent escort; the organization did not return Nunatsiaq News’ request for information.

But Dr. Johanne Morel, another Montreal Children’s Hospital pediatrician who has been working in Nunavik since the 1980s, said the issue of unaccompanied children has been communicated to the province and ÉVAQ before.

In the early 1990s, when Morel was working out of Inuulitsivik hospital in Puvirnituq, a group of health care professionals started a petition calling on the Quebec government to allow parents to accompany their children on the air ambulance.

The petition gathered 900 signatures and was sent to then-health minister Marc-Yvan Côté and other government ministers. But Morel said they never received a response.

“I got nothing,” she said. “Months later, we heard from ÉVAQ; they said sorry, but they couldn’t help.”

The issue boils down to time and energy, Morel said—the air ambulance service wants to be as efficient as possible with its time and its workers don’t have the means to support parents in-flight.

A sick or injured child can indeed be an upsetting event for their parent. Morel remembered an incident where a Nunavik toddler was attacked by a dog and flown south for further care.

“The mother ran out of her house and started to run after the plane,” Morel said. “She was so distressed.”

“The first time you hear this, you’re shocked. How can you send a young child away for surgery without their parent?”

Another Nunavik mother, whose young child was transported alone by air ambulance a couple years ago, said that parents in the region are so used to the rules, they don’t bother complaining about it.

“We’ve been so de-humanized, we accept it,” said the woman, who did not want to be named. “We are stressed enough as a society, these polices just add to it. But when you strip it all down, it’s racism.”