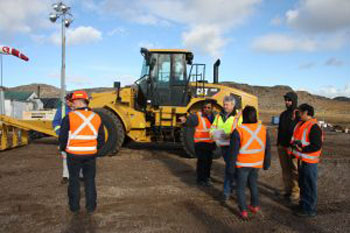 A female Inuk employee at Baffinland’s Mary River mine said she has faced regular discrimination and intimidation on the job at the north Baffin iron mine since she began working there earlier this year. (FILE PHOTO)

Inuit women employed at a Nunavut mine are the target of sexual harassment, racism and sexism, says a worker at Baffinland’s Mary River mine.

The female Inuk mine employee, who did not want her name made public for fear of further harassment, said she has faced regular discrimination and intimidation on the job at the north Baffin iron mine since she begin working there earlier this year.

The employee spoke to Nunatsiaq News last week after posts shared on social media last week appeared to show other mine employees referring to Inuit women staff at Mary River as “cock stars.”

“That is just regular behaviour here,” the woman said. “The men just stare and make comments.”

Inuit are already a minority at the mine site; while Inuit employees accounted for 20 per cent of the mine’s workforce in 2016, that percentage had dropped to 12.5 per cent by early 2017. Inuit women staff make up a small number of that group.

“I’ve walked into buildings where men are talking about me to ask for blow jobs [and saying that] Inuk girls are easy,” the woman recalled.

She said the harassment comes entirely from non-Inuit staff, and said that her supervisors have not made efforts to intervene.

While the harassment is largely verbal, there have been more serious incidents of intimidation, the woman said, like the time a group of male co-workers left her in a rock truck at the quarry with no radio contact at the end of her shift.

There has been at least one grievance filed by an Inuk woman employee at Mary River in relation to sexual harassment and discrimination at the mine site.

Grievances from Inuit staff go through the Qikiqtani Inuit Association, which oversees the Inuit Impact and Benefits Agreement at the mine.

“In the past few months QIA staff have been providing support to the individual who has brought forward the harassment complaint through our grievance process,” the organization said in a June 20 release.

The Inuit birthright body said it is addressing the matter with Baffinland management, but wouldn’t speak to the specific case.

“QIA is very sensitive to the particular nature of sexual harassment and wants to ensure every Inuk feels safe, supported and protected in the workplace,” the organization said.

“We want to ensure there are accessible policies and procedures in place at Mary River to support any Inuit employee faced with workplace harassment.”

For its part, Baffinland said it was aware of the claims of harassment.

“We are aware of these posts on social media and take these accusations very seriously,” a Baffinland spokesperson said in an email to Nunatsiaq News.

“As per company policy, we do not discuss these types of matters externally.”

This isn’t the first time Inuit women have come forward with allegations of harassment and discrimination within Nunavut’s mining industry, however.

Researchers from the University of British Columbia teamed up with Pauktuutit Inuit Women of Canada to look at some of the social impacts the 2010 opening of Agnico Eagle’s Meadowbank gold mine has had on women employed there and living in nearby Baker Lake.

Though women cited the prosperity that came with new jobs available to the community, many more reported the “undignified behaviour” shown towards female Inuit employees by some male staff at the mine, including sexual harassment on the job and even rape.