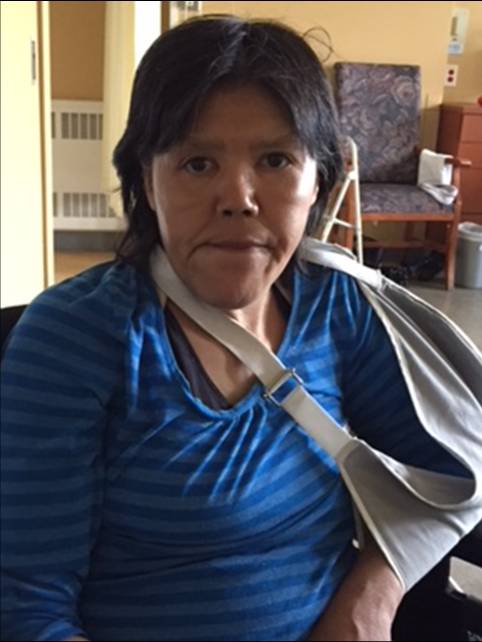 Mina Aculiak, 48, went missing for six days after Montreal police released her from a detention centre in the city’s west end late July 27. She was found Aug. 2 “safe and sound,” police said. (PHOTO COURTESY OF SPVM)

Montreal police say they’ve located an injured Nunavik woman who went missing for six days after she was released from a detention centre in the city July 27.

Mina Aculiak, from Umiujaq, was found “safe and sound” by an off-duty police officer in the city’s west end the morning of Aug. 2, Montreal’s police service said.

But the woman’s disappearance raises questions about how she was released by police almost a week earlier, while intoxicated, injured and potentially suicidal.

This past April, Aculiak, 48, was struck by a police car in her home community while officers there tried to apprehend her for allegedly threatening another person with a knife.

The woman suffered broken ribs, fractured vertebrae, a broken arm, a punctured lung and a lacerated liver and kidney, which she was treated for at the Montreal General Hospital, according to a report by La Presse.

Aculiak was transferred in June to complete her recovery at the rehabilitation centre, where she was waiting for surgery.

It was from there on the night of July 27 that Montreal police said the woman stepped outside for a cigarette and consumed alcohol.

When she returned to the centre intoxicated, staff called Montreal police, who transported Aculiak to their detention centre in Ville Saint-Laurent to sober up.

Sometime just before midnight on July 27, officers released Aculiak and provided her with a bus ticket for her return to the rehabilitation centre, according to
a police spokesperson.

Aculiak had been last heard making comments about suicide. She doesn’t speak English or French and left the police station with a catheter and her arm in a sling.

The circumstances of Aculiak’s original injuries are already the focus of an investigation, launched two months after the April incident, by Quebec’s police watchdog, the Bureau des enquêtes indépendantes.