“Homelessness doesn’t take the weekends off” 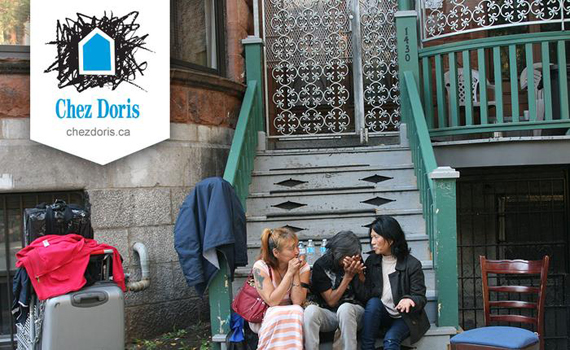 A group of clients sit on the steps of Chez Doris, Montreal’s only day shelter dedicated to women. Staff say a decision to close the shelter on weekends has had a negative impacts on its clients. (CHEZ DORIS PHOTO)

It’s been almost six months since the downtown Montreal women’s day shelter Chez Doris closed its doors on weekends, and staff there say this closure has had an impact on its clients, including the many Inuit women who use its services.

Chez Doris offers a hot meal, beds, clothing and other support services to roughly 80 women in need each day. About 15 per cent of the centre’s clients are Inuit.

But last May, Chez Doris’s board of directors announced a decision to close the shelter on weekends due to funding shortfalls.

“It’s been much harder to find our participants now,” said Tina Pisuktie, the Inuit case worker at Chez Doris.

The weekend closures, combined with the closure of nearby Cabot Square, a gathering place for many of the city’s homeless people, has meant Inuit clients are going to new neighbourhoods.

Now the shelter has made an appeal for volunteers and financial support; the centre needs $100,000 to be able to re-open on weekends over the next year.

“Homelessness doesn’t take the weekends off,” is the title of the shelter’s entry in an Aviva Community Fund contest. The winner is determined by the number of votes a project receives.

Many clients rely even more on support as the weather gets colder, Pisuktie said.

“It’s winter now,” Pisuktie said. “And so there are those who’ll go to jail, because they see that as a more reliable shelter.”

Most of them will end up at Montreal’s Tanguay women’s detention centre, in the city’s northwest end.

A Nov. 10 report in Quebec’s French-language newspaper La Presse revealed at least 19 of the prison’s 147 inmates were Inuit women from the Nunavik region.

Pisuktie, whose position is funded by Makivik Corp., is now working with Tanguay to try and offer more support and resources to Tanguay’s Inuit inmates — in and outside of prison.

Pisuktie said Chez Doris already coordinates a clothing drop for inmates once a month. But she plans to start visiting inmates more often.

“We want to be able to help with an exit plan, to make sure they have resources when they leave prison, whether it’s a bus ticket or a place to stay,” she said. “Especially for women who don’t know the city.”