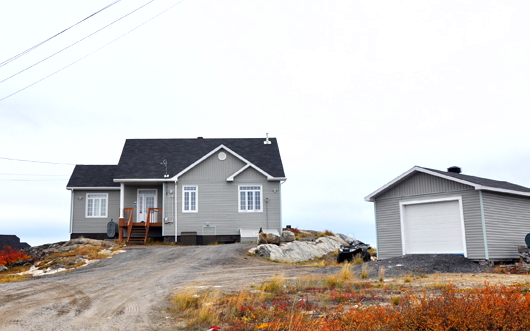 Mary Simon and Whit Fraser’s Kuujjuaq home has been up for sale since 2014, but the couple says the region lacks much-needed support for buyers who want to purchase previously-owned homes. (PHOTO BY SARAH ROGERS)

KUUJJUAQ — Inuit leader and education advocate Mary Simon has scaled back her work pace in recent years, but still keeps a busy schedule, which she divides between Ottawa and her hometown of Kuujjuaq.

From their Kuujjuaq home, Simon and her husband, Whit Fraser, enjoy a view of the Koksoak River and the sprawling Nunavik community.

The couple first chose the site and began construction on the grey, vinyl-clad home, finally moving into the house in December 2007.

Buying your first home can be challenging but most Nunavimmiut would consider it a major achievement, in a region where only three per cent of the population owns their own home.

To ease the housing shortage and high costs of bringing building materials into the region, the Kativik Municipal Housing Bureau administers a subsidy program, through the province, to offset the cost of construction.

Simon and Fraser spent about $300,000 on the initial cost of the home, but over the years, received roughly $800 a month in subsidies.

Over a 15-year period, the program is designed to offset up to 75 per cent of the cost of constructing a home, up to a maximum price, based on the home and community.

“We were thankful for what we got,” said Fraser.

But facing age and health issues, Simon and Fraser were looking to downsize and cash in on some of their equity.

The problem isn’t a lack of interest, Fraser said — it’s a lack of support from the same social housing body that allowed him to build the home in the first place.

Nunavimmiut buyers should be able to purchase an existing home with the same subsidies made available to someone constructing a home, Fraser said.

It’s a program he and Simon believed was already in place when they put their home up for sale in 2014.

Under a revised version of the home ownership program launched as part of the Quebec government’s Plan Nord in 2011, the Société d’habitation Québec (SHQ) said its goal was to promote the construction of new homes in the region, as a way to create a local housing market.

But as part of that program, the SHQ could also authorize subsidies towards the purchase of a previously-owned home.

Fraser said he was told by staff at the local housing bureau office that the subsidy was indeed available to interested buyers; without it, he said, there would be little guarantee of selling your home.

“To be clear, had we been told that the house would not qualify for future subsidies, or purchasers, we would not have gone into the arrangement. I doubt anyone would have,” he said.

“I wonder if anywhere else in the country a government would effectively kill a housing market and leave homeowners wondering how or if ever they can access their equity.”

Jean-Guy Lemieux, the SHQ’s director of Aboriginal and intergovernmental affairs, noted that the agency’s home ownership program has no obligation to provide subsidies to Nunavimmiut buying existing homes, but could decide to issue a subsidy if it so chooses.

It hasn’t yet, he added.

“We’re in favour of this program but it will require thought,” he said. “We need to reflect on this because it could have a major impact.”

The program is currently under review but Lemieux said there isn’t a timeline for when the agency will decide if or how to revamp the subsidy.

And for its part, the agency doesn’t see the urgency; while a number of Nunavimmiut have inquired about purchasing previously-owned homes, only two clients have officially applied for a subsidy to do that, he said.

A review is likely to look at the SHQ’s entire home ownership program and how effective it’s been at moving Nunavimmiut out of social housing and into the a private market.

The SHQ says that 77 privately-owned homes in the region (of an estimated 95) were built or purchased with the program’s subsidies.

But the program hasn’t panned out as expected. The KMHB said that since 2012, only nine units have been built under the program so far; an eight-unit co-op in Puvirnituq built by a not-for-profit, along with a private homes in Kuujjuaq.

The SHQ said five more clients have been approved to build homes for 2016.

Pat York, a self-employed Kuujjuaq contractor, says the inability to qualify for a subsidy to buy an existing home is a major barrier for potential home buyers in Nunavik.

“A lot of people want a home, but don’t want to do all the legwork required to have it built,” he said.

But if York decided to build a house to put on the local market, it would become an “existing home” in the eyes of the SHQ, meaning a potential buyer couldn’t access the subsidy.

“Then you’re stuck with it,” he said. “They just keep throwing up all these walls at us.

“They might as well just close the program and build more social housing.”

Or, York suggested, maybe the province needs to take another look at what constitutes an “existing home” under the program.

That’s the point Fraser has reached. He says he’s losing patience waiting for the SHQ to rule on the subsidy.

“We want it resolved. There’ll come a point where we’ll feel we have no choice but to go to civil court, because we think a court would hear our argument pretty clearly,” Fraser said.

“The housing market has been destroyed by a bunch of inaction by different levels of government and people need to ensure they have some protection for their investments.”

Since the program was revised in 2012, it has invested $4.5 million into the region, the SHQ said’ $2.8 million towards construction costs and another $1.7 million for “occupancy assistance.”

At least some of the program’s budget appears to have been redirected into 70 new social housing units for the region as part of the current Liberal government’s relaunched Plan Nord, announced earlier this year.

The new plan also includes subsidies for 20 privately built and owned homes that would fall under a “buy-back” program, meaning private owners are guaranteed the ability to sell their homes back to the province.