“It was time for change and new ideas” 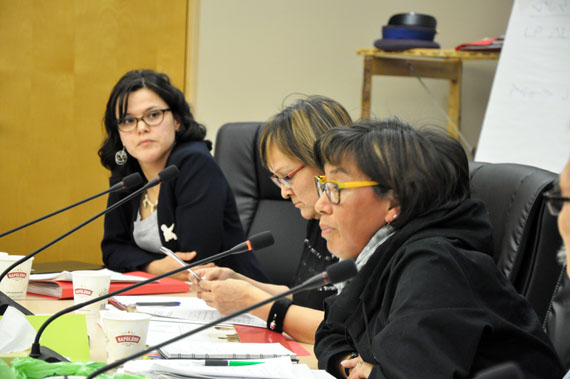 Jennifer Watkins, a Kuujjuaq municipal councillor and health board administrator, surprised many when she won a two-way race against the incumbent, Maggie Emudluk, who had held that position since 2005.

The regional council cast 14 ballots for Watkins and 11 for Emudluk.

“You could tell it was time for change and new ideas,” Watkins said following the election, although she said that she hadn’t expected to win.

A graduate of John Abbott College, Watkins grew up in Kuujjuaq and is fluent in Inuktitut, English and French.

At 32, Watkins said Nunavimmiut youth will remain a major focus of her leadership.

“We need to communicate well and be transparent,” she told KRG councillors Nov. 24. “Our needs have to be heard and not forgotten. I want to represent Nunavimmiut, and represent them well.”

Watkins also pledged to follow in the footsteps of the signatories of the James Bay and Northern Quebec Agreement, who worked to advance the well-being of Inuit in the region, she said.

As an executive member of the last KRG council, Watkins has advocated for more Inuit staff at the KRG and other regional organizations.

“They were all created by the JBNQA,” she said. “I think it was time for a reminder that it was put in place for the Inuit of Nunavik.”

Both Watkins and Emudluk were tearful following the Nov. 24 vote, with Emudluk admitting she had expected to be re-elected.

“It can be heavy at times,” she told councillors about the role of chair. “But I want you to give all your support to Jennifer.”

Later, Umiujaq councillor Lucy Kumarluk (Crow) said she had reconsidered and was acclaimed as vice-chair.

How is KRG council’s leadership elected?

The KRG council is made up of a representative or councillor from each of Nunavik’s 14 communities, who would have been recently elected at the municipal level, plus one Naskapi representative from Kawawachikamach.

Each councillor gets a vote; councillors from communities with a population of more than 500 get two votes.

What do Nunavik’s representatives make?

Regional councillors will each earn an annual salary of $13,865 in 2015. If they’re elected or appointed to other positions, they receive additional remuneration on top of that.

Those salaries are determined by the government of Quebec, and paid out by the KRG.

If either the chair or vice-chair reside in a community outside of Kuujjuaq, they receive an allowance to cover accommodation in Kuujjuaq plus 26 trips a year, plus an expense allowance of up to $15,976.