“The iron fitting is certainly from one of the Franklin shipwrecks”

This oval close-up image shows the British Royal Navy’s “broad arrow” markings with the number 12, on the heel of the artifact – which could have come off the wreck of one of the doomed Franklin Expedition ships. (IMAGE FROM GOVERNMENT OF NUNAVUT) 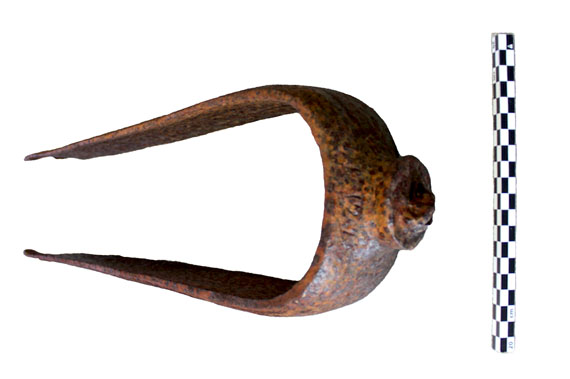 Government of Nunavut archaeologists found this 25-centimetre-long iron fitting from an early-19th century ship, Sept. 1, on an island southwest of King William Island. (IMAGE FROM GOVERNMENT OF NUNAVUT)

A Government of Nunavut archaeology team claimed the first discovery from this year’s massive search for the remains of the 1845-46 Franklin Expedition to the Northwest Passage.

Although the most extensive searches for remains are being undertaken at sea by a long list of public, private and non-profit agencies, the Nunavut archaeology team made the first finding of this year’s effort on land, on a small island southwest of King William Island, Sept. 1.

The team found an “iron fitting from a Royal Navy ship, identified as part of a boat-launching davit” — or boat-lifting mechanism — “on an island in the southern search area,” the Government of Nunavut announced in a Sept. 8 news release.

The group also found a wooden object, thought to serve as a plug for a “deck hawse” that held the ship’s chain cable.

“These findings are important because the iron fitting is certainly from one of the Franklin shipwrecks,” the release states.

“This discovery is consistent with, and supports, 19th century Inuit oral testimony describing a shipwreck to the south of King William Island.”

The iron artifact, measuring about 25 by 15 centimetres, bears “broad arrow” markings associated with the British Royal Navy of the early 19th century, according to the release.

This year’s campaign to find the remains of the lost 1845-46 Franklin Expedition is the fifth since 2008, and largest so far.

Dubbed the 2014 Victoria Strait Expedition, this year’s edition centres on the waters of Victoria Strait, between Victoria Island and King William Island in the Kitikmeot region of Nunavut.

As in previous years, Parks Canada is co-ordinating the expedition with partner agencies such as the GN, the Canadian Hydrographic Service, the Royal Canadian Navy and the Canadian Coast Guard.

Other private, public and non-profit agencies have joined for 2014, providing equipment, expertise and funding this year.

The search continues to contribute detailed mapping data of Arctic waters and the Arctic seabed, according to the Government of Canada.

“This year’s expedition builds on the work of previous searches and is expected to greatly exceed the best year of mapping to date,” the Prime Minister’s Office stated in a news release Aug. 25, shortly after the 2014 campaign began.

The Prime Minister’s Office also lauded the ongoing efforts for helping to improve marine safety, and cutting down on “search and rescue response time, as well as fuel economization.”

The GN’s contributes to the yearly search efforts by leading land-based surveys and investigations of archaeological sites.

Since 2008, the GN has conducted “terrestrial surveys” designed “to support Parks Canada’s searches” for the wrecks of the two Franklin Expedition’s ships, the territorial government stated in the Sept. 8 news release.

Those two ships, the HMS Erebus and HMS Terror, were lost in Victoria Strait almost 170 years ago.

“Based on the finding, the GN terrestrial team has spent the last few days conducting additional surveys on the islands west and south of Grant Point,” southwest of King William Island, the government stated.

Leona Aglukkaq, MP for Nunavut and Minister of Environment, said the finding will “contribute to the search for the most sought-after shipwrecks in Canadian history.”

On the morning of Sept. 9, Prime Minister Stephen Harper was to have participated in a Franklin-related event at the federal government’s Walkley Rd. lab in Ottawa.