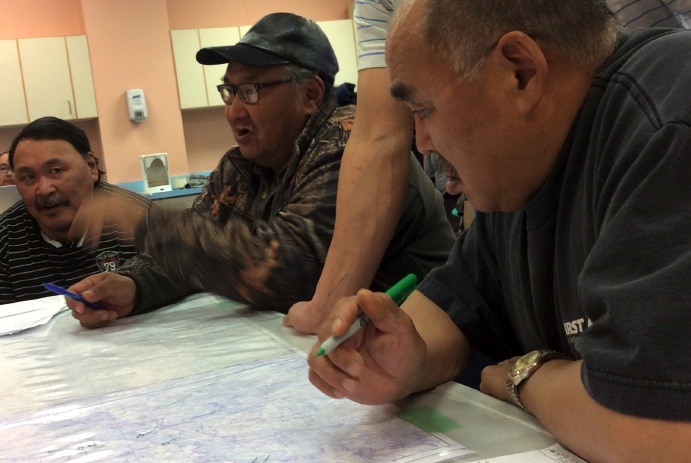 In Arviat, participants in a community-based research study on low-impact shipping corridors discuss where the corridors should run, in this photo pulled from the recently released report from the University of Ottawa. 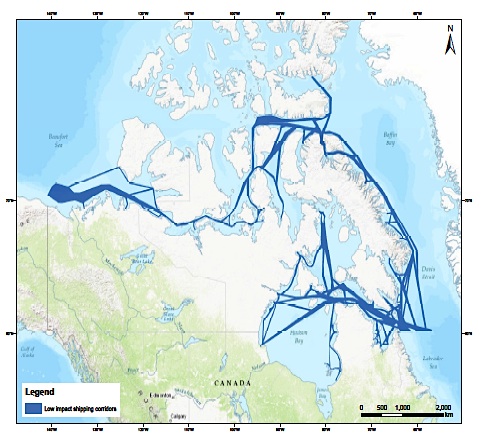 In this map from “Arctic Corridors and Northern Voices: Governing Marine Transportation in the Canadian Arctic,” you can see where the usual shipping corridors are located.

Add this to the long list of challenges faced by companies shipping in Canadian Arctic waters: the seabed near the western shore of Hudson Bay is getting shallower.

That’s because of a phenomenon known as post-glacial rebound, which sees the land and surrounding seabed, squished thousands of years ago by glaciers, still heaving back into shape.

Near the community of Arviat, this uplift is pushing sandbars upwards at a rate of 9.3 mm per year, according to a report prepared by researchers at the University of Ottawa, and “creating shallower water and new hazards for vessels to navigate.”

The 28-page report, called Arctic Corridors and Northern Voices, proposes ways to deal with these increased risks. It was prepared with input from many people in Arviat.

The report is part of larger study from the University of Ottawa’s Environment, Society and Policy Group that’s looking at marine traffic in 12 Arctic communities for various partners in federal, territorial and local government agencies, including Transport Canada, the Canadian Coast Guard and the Canadian Hydrographic Service.

The federal government wants to manage the increase in Arctic shipping, which has grown 75 per cent since 2005.

So, when federal transport minister Marc Garneau headed to Cambridge Bay this past August to announce a $175-million marine safety plan, some of that money was earmarked to establish low-impact shipping corridors.

Promoted by groups such as the Pew Charitable Trusts, these corridors could provide infrastructure, navigational support and emergency response services as marine traffic increases in the Arctic.

To manage these low-impact shipping corridors, the University of Ottawa report recommends forming a committee that would include territorial-level organizations and hunters and community members from across the Canadian Arctic.

The report’s researchers looked at coastal maps with people in Arviat, who shared their knowledge about the marine environment and suggestions about where corridors should go. Arviat residents who contributed to the report include Joachim Akatsiak, Thomas Siatalaaq Alikasuak, Louie Angalik, Paul Kablutsiak, Joe Karetak, Scottie Shamee and Arden Nibgoarsi.

Contributors to the report also said existing oil and fuel spill response capacity is “not sufficient” on ships or in Arviat. To deal with the increased risks of spills, they suggested permanent, lighted navigational markers or GPS co-ordinates marking reefs to guide ships to Arviat.

But even with these measures, problems will remain because ships are “very noisy,” participants said, and sea mammals will flee if they detect a bad odour, such as an oil spill.

Participants also worried that increased shipping could lead to decreased meat quality: “When they are not disturbed by human activity and noise, seals are more active, have better reproduction, and their meat tastes better,” they said in the report. “Noisy ships … cause marine mammals to flee which stresses them. Stress might change the taste of marine mammal meat, as happens when caribou are chased and the taste of the meat becomes less pleasant.”

They also said the use of sonar should be limited, and shipping noise and wakes should be reduced.

And they want to see more research documenting the impact of ships on northern waters, of waves on shoreline erosion and of sonar activity on marine mammals: “Our animals are being affected, and when they are affected we are also affected.”

Arviarmiut said they “should be and wish to be” involved in the development and management of the low-impact shipping corridors.

“Infusing Inuit and northerners’ voices in the continued development of the low-impact shipping corridors is critical to ensuring safe marine transportation near Arviat and throughout the Canadian Arctic,” the report states.

A similar report on shipping corridors looked at Gjoa Haven, in the Northwest Passage.

In Gjoa Haven, the concerns about shipping corridors are slightly different than in Arviat, with more focus on the impact of shipping in ice-covered waters. There are also worries about security in the Northwest Passage because of both increased marine traffic and people wanting to visit the site of the Sir John Franklin shipwrecks.

But the recommendations from Gjoa Haven include a similar call, that Inuit “should be and wish to be included on an ongoing basis in the development and management of the low-impact shipping corridors.”

Consultations on the Ocean Protection Plan are now underway in Nunavut, with a day of discussions slated for Nov. 23 in Cambridge Bay.