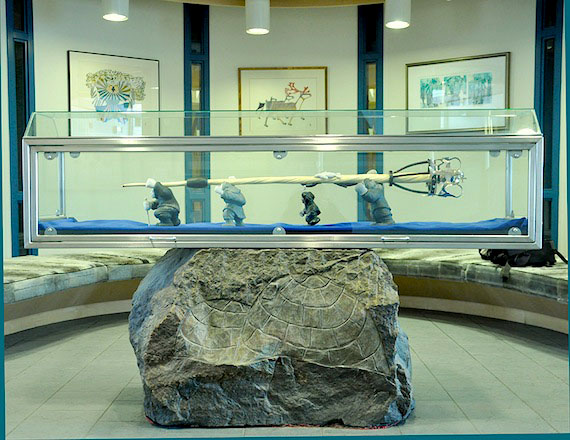 The ceremonial mace that the sergeant-at-arms carries into the legislative chamber when the Legislative Assembly of Nunavut is sitting. After a retreat in Pond Inlet, MLAs still have little to say about what their “mandate” will consist of. (FILE PHOTO)

After emerging last Friday from a week-long behind-closed-doors full caucus retreat in Pond Inlet, Nunavut MLAs had little to say, in a statement released Monday, about the “mandate” that meeting was intended to produce.

Instead, Nunavut residents will have to wait until some time next month to find out what their mandate statement, titled “Turaaqtavut,” actually says.

That’s because MLAs won’t table it until mid-way through the winter sitting of the Nunavut Legislative Assembly, which is scheduled to start March 6.

That day, MLAs will continue the first session of the fifth legislative assembly by looking at the Government Nunavut’s capital budget for 2018-19.

But MLAs won’t table the Turaaqtavut document until after that capital budget work is done, their statement said.

Part-way through the winter sitting, after the capital budget is passed, MLAs will start a second session.

It’s only then that they’ll table their mandate document, at the start of the second session.

In their statement, MLAs made little or no specific commitments.

But they did say the new mandate contains “broad thematic priorities”:

• Working towards community and social well-being through “Inuusivut.”

• Developing the territory’s economy and infrastructure base through “Pivaallirutivut.”

• Strengthening education and training through “Sivummuaqpalliajjutivut.”

• Recognizing Nunavut as a distinct territory in Canada and the world through “Inuunivut.”

• Building closer partnerships with the Government of Canada and Inuit organizations through “Katujjiqatigiinnivut.”

• A review of the Official Languages Act.

• A review of the Inuit Language Protection Act.

• A review of the Representative for Children and Youth Act.

As part of that work, MLAs will look at the idea of creating an ombudsperson for the territory.

An ombudsperson, or ombudsman, is an independent official who handles complaints about maladministration or rights violations within government.

“Our deliberations in Pond Inlet built on the cabinet’s work to date and afforded members of the legislative assembly with the opportunity to articulate and advance priorities for their constituencies and the territory as a whole,” Premier Paul Quassa said in the statement.

Nunavut MLAs have produced such mandate statements since 1999, in private meetings held in the months that follow territorial elections.

The last one, created in 2014, was called Sivumut Abluqta: Stepping Forward Together.