“We are the voice of the people, and If you’re just going to ignore us, you’re really ignoring the people” 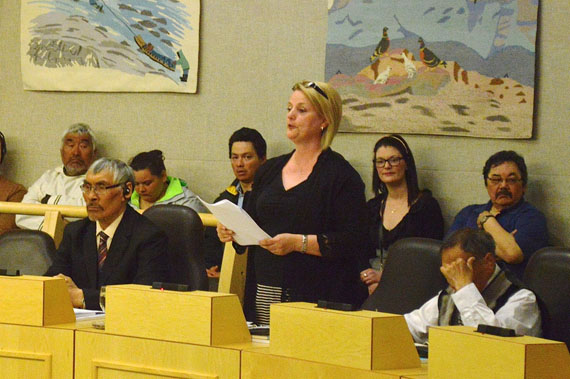 Iqaluit-Niaqunnguu MLA Pat Angnakak earned support from all regular MLAs June 7 to create an independent public service commission to look after Government of Nunavut staff. All eight cabinet ministers voted against the committee of the whole motion. (FILE PHOTO)

After five days of heated debate, Nunavut MLAs have decided that the Government of Nunavut is failing its public service.

And they voted to create an independent body to handle staff recruitment, hiring, training and workplace wellness.

The snap vote came June 7 after Iqaluit-Niagunnguu MLA Pat Angnakak put forward a motion in committee of the whole to create a public service commission.

A number of ministers and MLAs spoke to the motion, including Keith Peterson, the finance and human resources minister, who warned members that such a hasty move could be costly.

In the end, all 12 regular MLAs voted in favour of establishing a public service commission modelled after a similar Yukon body and all eight cabinet ministers voted against it. The motion carried.

“I’m thankful for the support I’ve got and I’m really hoping the government will look at this and say, ‘all those MLAs represent so many people and this is what the people want,’” Angnakak told Nunatsiaq News June 9.

“We are the voice of the people and If you’re just going to ignore us, you’re really ignoring the people.”

The Yukon’s public service commission, which includes a respectful workplace office, provides human resource advice and support services to Yukon government departments and employees, according to its website.

It also acts as the government’s employer and maintains human resource legislation, policies and collective agreements.

Nunavut used to have a human resource department that handled all that for its 3,400 or so employees but it was dissolved in 2013 and its duties and responsibilities split between the departments of executive and intergovernmental affairs, and finance.

Angnakak has been leading the charge to bring those functions back under one roof.

She said the needs of Nunavut public servants are not being met, that workplace wellness has deteriorated and that Nunavut has not delivered on its own policies of hiring, training and promoting Inuit.

“I do want to make it clear, I’m not saying this model is the answer for all,” Angnakak said, of the Yukon commission.

“I’m just trying to make things a bit more clear and transparent because we have too many layers the way it is now, it’s so bogged down by bureaucracy.”

During this spring session, she and other MLAs, including David Joanasie, Paul Okalik, Isaac Shooyook, Alex Sammurtok and Joe Enook spent hours in committee of the whole, grilling Peterson and senior staff about human resource issues.

Peterson held his ground throughout the sometimes testy debate, urging members to allow more transition time to the new structure before concluding it’s a failure.

He also pointed out the progress both departments have made toward improved HR management including quicker hiring turnaround times, the hiring of an ethics officer, the enactment of the Nunavut Code of Values and Ethics and workplace harassment training, to name a few.

Angnakak said June 9 that Peterson is invested in the current structure, believes it’s working and doesn’t want to start over, and she sympathizes with where he’s coming from.

But she said that she believes his loyalty lies with numbers, not people. She said thinks the problems run too deep, the workforce is too dysfunctional and the time to fix them is now.

“The problems are not going to go away. We’re talking about human beings. Not numbers — people,” she said. “They need to be treated with dignity and transparency.”

“Creating an entire body such as a public service commission for HR responsibilities and expect that it would be fully staffed and capable of handling the Government of Nunavut’s human resource needs is unrealistic and costly,” Peterson said, according to the Hansard transcript.

“I can assure everybody that people are treated fairly and equitably,” Peterson added.

Peterson is likely referring to a series we ran on workplace harassment in the GN.

Education Minister Paul Quassa also spoke against the motion, saying with less than two years left in their current mandate, committing to this “handcuffs” the next government by obliging them to follow through.

Angnakak told Nunatsiaq News that investing in Nunavut’s public service is money well spent. And as for handcuffing the next government, they can choose to follow through with HR changes or not: It will be their choice.

But if the current government seriously researches the Yukon model and others, and reports fairly on those options, the next slate of MLAs might be persuaded to act on them, Angnakak said.

Joanasie and Okalik supported the motion during the June 7 debate.

Joanasie said he hopes a new independent commission would help boost Inuit employment within the public service, which has remained at about 50 per cent since 1999.

Article 23 of the Nunavut Land Claims Agreement binds the GN to hire a workforce that represents Inuit demographics in Nunavut, which would mean roughly 81 per cent beneficiaries in the public service.

“My lines of questioning have been deflected or unanswered,” Joanasie said, referring to his committee of the whole questions.

“I think this independent commission would be a fairer and more transparent model to see our hiring practices through a different lens.”