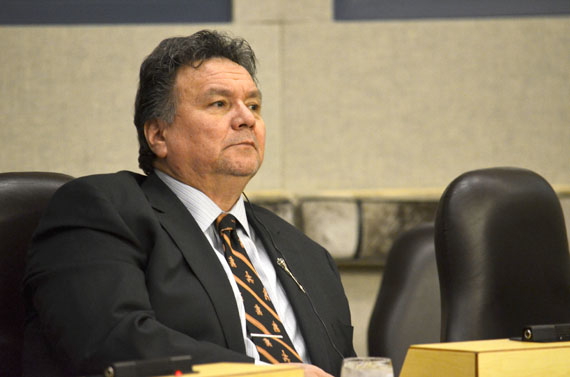 Nunavut Premier Peter Taptuna has declared suicide a crisis and has put Health Minster Paul Okalik in charge of a special cabinet committee to implement recommendations from a recent coroner’s inquest into rampant, territory-wide suicide.

“Overwhelmingly, Nunavummiut are saying we need to do more at the senior government level, at the hamlet level, at the local level, and at the family level,” Taptuna said in his minister’s statement Oct. 22 in the Nunavut legislature.

“Precious lives should not be lost. We have heard the recommendation loud and clear.”

In accepting his new responsibility to take the helm of the slippery suicide file, Okalik responded with his own tearful statement about his family’s struggles with suicide.

“As some of you know, I lost my brother to suicide when I was 13. I was traumatized. Years later, as I contemplated suicide, it was my older sister Ida who saved me with her love,” Okalik said.

He said he was honoured to assume the role as minister responsible for suicide prevention.

“I’m here today in my sister’s memory. I want to give Nunavummiut words of hope. Surround yourself with loved ones. There are many. Spend time on the land learning our ways from our elders. Challenge yourself and the system by getting an education. It is the reason I got a law degree. Believe in tomorrow.”

Okalik’s statement was met with rousing applause and a standing ovation in the legislature.

The designation of a minister in charge of suicide prevention was one of dozens of jury recommendations following a two-week special coroner’s inquest held in late September in Iqaluit to examine circumstances around Nunavut’s high suicide rate and possible remedies.

The jury recommended the Government of Nunavut declare an actual “public health emergency,” but Taptuna has opted to use the word “crisis” instead.

Regardless, Nunavut’s Chief Coroner Padma Suramala said Oct. 23 in an email to media that she is pleased that the “chain of command has taken the jury recommendations seriously and there is many movements I can see happening.”

She said she’s confident Okalik, “will bring positive changes and implement those recommendations,” to the best of his ability.

One of those recommendations was for the GN to create a “secretariat” which would report to the suicide prevention minister and which would have the “mandate and resources to demonstrate the Government’s commitment to the crisis.”

In his statement, Taptuna seems to be promising just that.

An associate deputy minister will soon be appointed to help coordinate a cabinet committee on quality of life, which will consist of Okalik and Taptuna along with the ministers of housing, education and family services.

That the premier himself will be on that committee suggests that emerging recommendations and plans will be acted upon quickly, Suramala said, something she finds reassuring.

The GN was roundly criticized during the special coroner’s inquest for dropping the ball on a previous suicide prevention strategy which involved input from the RCMP, the Embrace Life Council and Nunavut Tunngavik Inc., but which lacked both decision-making leadership and money.

This new strategy appears to address those problems.

The cabinet committee, with the help of the senior bureaucrat, will help guide a broad-based, cross-departmental suicide prevention initiative and source money to pay for new staffing positions, recruitment efforts and programs as outlined by the coroner’s jury, the premier said.

Okalik added a few more details of the government’s new suicide strategy in his statement.

He said along with an additional $5 million earmarked for a mental health transition home in Cambridge Bay, the GN will ensure out-of-territory mental health treatment is adequately funded.

As well, the GN will recruit psychiatric nurses for Qikiqtarjuaq, Kimmirut, Iqaluit and Grise Fiord/Resolute Bay.

A building is currently being renovated in Rankin Inlet to add mental health beds there, Okalik added, and public consultations will begin this fall on the territory’s Mental Health Act, “to ensure the bill incorporates Inuit Societal Values and builds on the successes of local organizations.”

With this new announcement, the GN appears to be taking the coroner jury’s recommendations seriously.

Taptuna is promising more money for:

• front-line workers and organizations as well as government departments “that deal with the issue every day;”

• ASIST suicide prevention training to ensure it continues and that it’s delivery across the territory is broadened; and,

• enhanced support for non-profit organizations such as Embrace Life Council and the Kamatsiaqtut Help Line;

“Today’s commitment aims to support a range of initiatives that directly and indirectly contribute to reducing risk factors for suicide and aiding in prevention,” he said.

But he also cautioned that the government cannot solve this problem alone — that Nunavut residents will have to take responsibility as well.

“We need to also enhance the mental, physical and domestic health of Nunavummiut,” the premier said. “This approach absolutely requires collective action within communities, families and outside partners.”