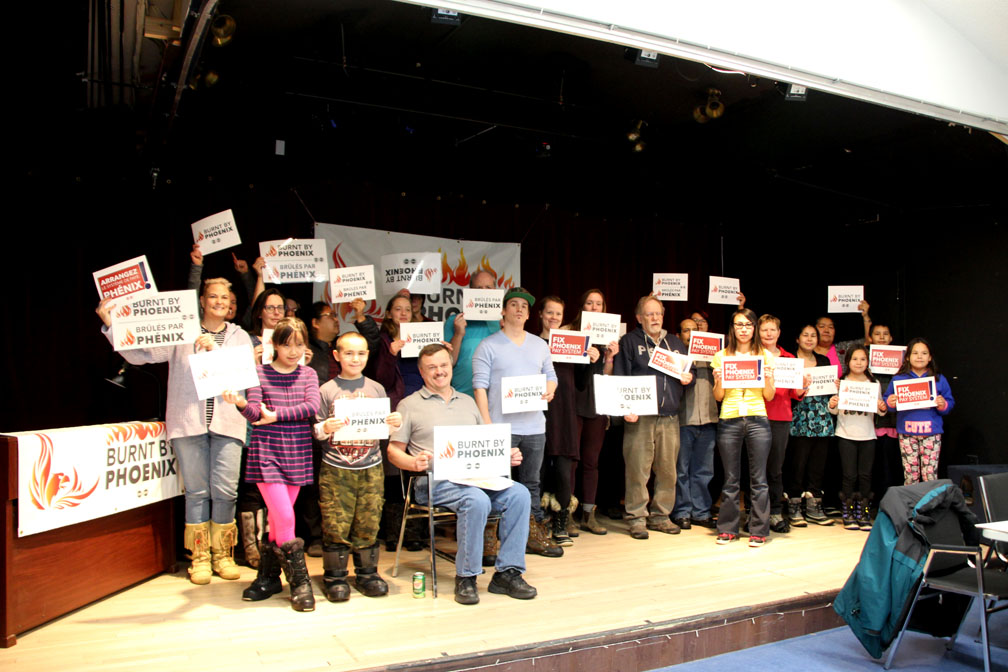 Burnt by Phoenix. Unionized federal workers in Iqaluit, during a lunchtime rally Feb. 28, join with federal civil servants across Canada in a protest against the Phoenix pay system. (PHOTO BY BETH BROWN)

Following the Liberal government’s announcement earlier this week that it will scrap its botched Phoenix payroll system, Nunavut’s unionized federal civil servants protested in a national day of action held on Wednesday, Feb. 28.

“We’re going to have problems for a while longer. Because of that we want to make sure that we hold the government’s feet to the fire,” Geoff Ryan of the Public Service Alliance of Canada told union members who gathered over pizza at the Iqaluit francophone centre.

The Phoenix system is a software system for managing payroll. Its introduction has caused many tens of thousands of federal workers to be paid incorrectly over the past two years.

When Ryan referred to the scrapping of the system, the group of about 30 people cheered.

Budget documents released on Tuesday, Feb. 27 said the federal government plans to “move away” from the Phoenix software package, but that could take years.

In the meantime, Nunavut federal workers like Olivia Aviugana still aren’t getting the pay their employer owes them.

The Indigenous and Northern Affairs Canada worker has not received her isolated post allowance since the fall of 2016.

For Nunavut workers, this means living on a southern salary while facing much higher living costs in Nunavut.

But it gets worse.

When Aviugana applied for maternity leave that same fall, the change never registered on her pay cheque until the following spring, about four months after she gave birth in March.

“That is considered over payment,” because maternity leave pay is treated as Employment Insurance, she said.

When her reduced maternity leave pay finally kicked in, the Phoenix system started making deductions from her pay to compensate for the over payment.

But Aviugana was never told this would happen, and she had already set aside the over payments.

“I knew they would come back and request it from me. I put all that into a savings account, so that when they request [money] from me, it would be right there,” she said.

“They started doing recoveries on their own … during that same period they weren’t paying me my isolated post allowances.”

Without the isolated post allowance, and with deductions being taken from her maternity leave pay, Aviugana said she found it impossible to keep up with rent and still care for her new child.

Because of this, near the end of her maternity leave she returned to work early.

At the same time, she took on acting positions in her department that should have put her into a higher pay bracket, but she did not receive the correct compensation for the extra work she was doing.

Aviugana agreed with Ryan, who called the whole thing a “fiasco.”

In November, PSAC launched a five-prong campaign to lobby the federal government for changes to the faulty pay system. Ryan said those issues were all addressed in the budget announcement.

“They agreed to all five actions PSAC and the other unions have requested,” Ryan said, speaking of the 2018 federal budget.

• Increase staffing in pay centres and departments to create the capacity to handle pay problems.

• Dedicate staff to help employees figure out their correct salaries.

• Stop recovery of emergency salary advances until the pay problems are fixed.

• Recover only the net pay, not the gross pay, for overpayments.

In its budget earlier this week, the federal government said it will spend $16 million over two years to research a new pay system.

That’s compared to with the $460 million they’ve spent so far on Phoenix.

Now, the federal government proposes spending $431.4 million over six years to continue fixing Phoenix, and another $5.5 million over two years for more staff at the Canada Revenue Agency while it does tax reassessments for federal employees hurt by Phoenix.

In Nunavut, PSAC plans to offer training and consultation meetings for civil servants who want to be better prepared to deal with Phoenix problems and who would like to help other people in their departments who are “burnt by Phoenix,” as the union calls its campaign.

“We want to make sure that they deliver on every promise that they made in the budget, and that they pay employees on time and accurately,” Ryan.