A view of the underground gold mine at Doris North in 2013. Pending approval by regulators, TMAC Resources now proposes three more underground mines in areas south of Doris North, with construction starting as early as 2019. (FILE PHOTO) 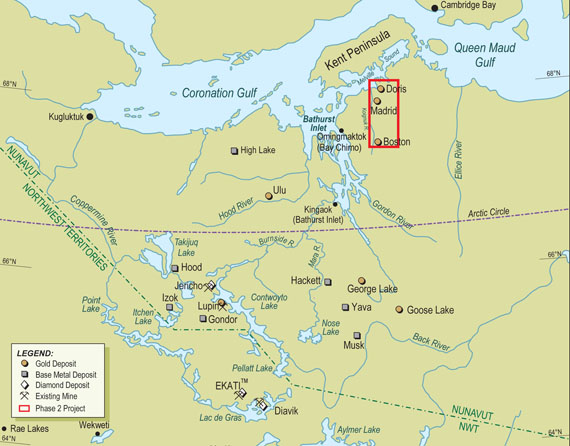 TMAC Resources, operator of the Kitikmeot’s Doris North gold mine, is now ready to take the next step in its development of Hope Bay, its vast gold field in western Nunavut.

And that’s the development of three underground mines located south of Doris North at properties called Madrid North, Madrid South and Boston, east of Bathurst Inlet and about 153 kilometres southwest of Cambridge Bay on the mainland.

In a huge document dump that started Jan. 18, the Nunavut Impact Review Board has released TMAC’s seven-volume draft environmental impact statement for the three-mine project on its public registry.

As of mid-afternoon Jan. 19, the review board had released more than 140 PDF files comprising the draft EIS, a project description, executive summaries, a plan language summary and numerous appendices filled with technical information.

TMAC actually submitted the draft EIS to the NIRB on Dec. 28, 2016, but NIRB staff have just finished preparing its many thousands of pages of documents for posting online.

Called Hope Bay Phase 2, the project would see the production of about 160,000 ounces of gold each year at the three new gold mines until at least 2032, with construction starting as early as 2019.

Right now, the company estimates the area hold 3.2 million ounces of proven and probable gold resources and 4.5 million ounces at a lesser degree of certainty.

And during operations, the company would employ about 800 people.

And the project is expected to generate about $400 million in royalties, mineral taxes and other payments.

In hiring, TMAC said it would give top priority to Inuit job candidates, especially people from communities in the Kitikmeot region.

At the same time, some contracts will be open only to Kitikmeot businesses, TMAC said.

The three mine sites will be connected to each other, and to Doris North and a marine shipping area at Roberts Bay by a 90-km all-weather road system.

And TMAC will expand the existing 500-metre gravel airstrip at Boston to accommodate jets and bigger propeller driven planes, including Hercules aircraft.

The draft EIS gives detail on the project’s expected impacts on land, water, air, wildlife and fish, and sets out actions the company will take to mitigate those impacts.

Like most draft EIS documents issued by mining companies, the document concludes that the Hope Bay Phase 2 project “is not likely to cause significant negative impacts to the environment, socio-economic conditions, or communities.”

The draft EIA also says the project is located in an area that’s just on the northern edge of the ranges used by the Bathurst and Ahiak caribou herds and that any impact on those herds is likely to be minimal and can be mitigated.

But they also say “any negative impacts can be managed.”

TMAC acquired the Hope Bay property in early 2013 from its previous owner, Newmont Mining Corp., after Newmont walked away from Hope Bay.

TMAC then sought and received project certificate amendments for the small mine at Doris North, which is now producing gold.

TMAC is a privately-held firm, but about 29 per cent of its shares are held by Newmont, and Newmont holds the right to receive a one-per cent royalty from gold production at Hope Bay.

Now that the NIRB has released the draft EIS for Hope Bay 2, they say they are now soliciting information requests from stakeholders.