“Even though our meeting has ended, the situation we are in will not stop” 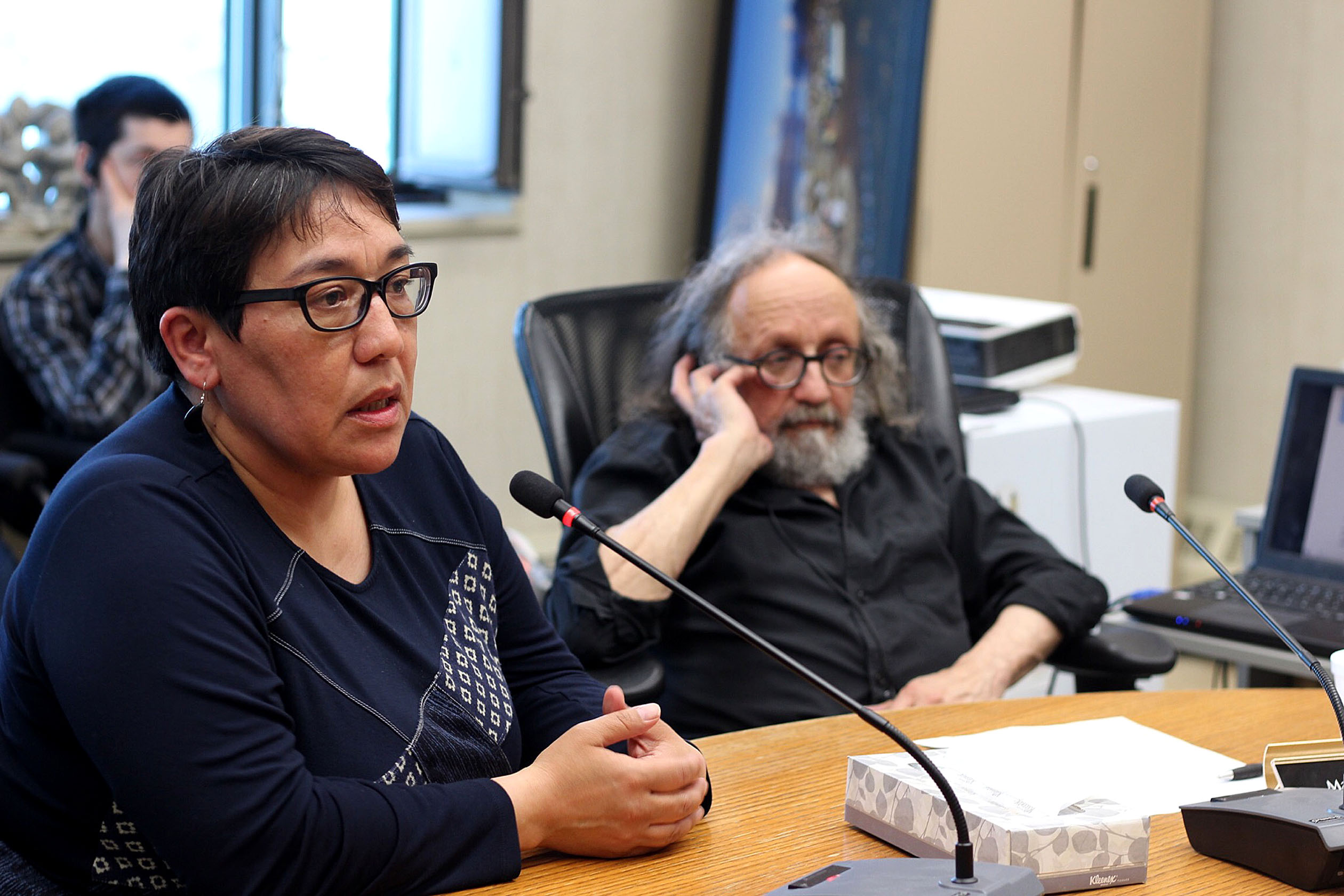 Pangnirtung MLA Margaret Nakashuk at a meeting held last night between hamlet representatives and civil servants from the Nunavut government, along with the Nunavut RCMP. “We need to speak out,” Nakashuk said. (PHOTO BY BETH BROWN) 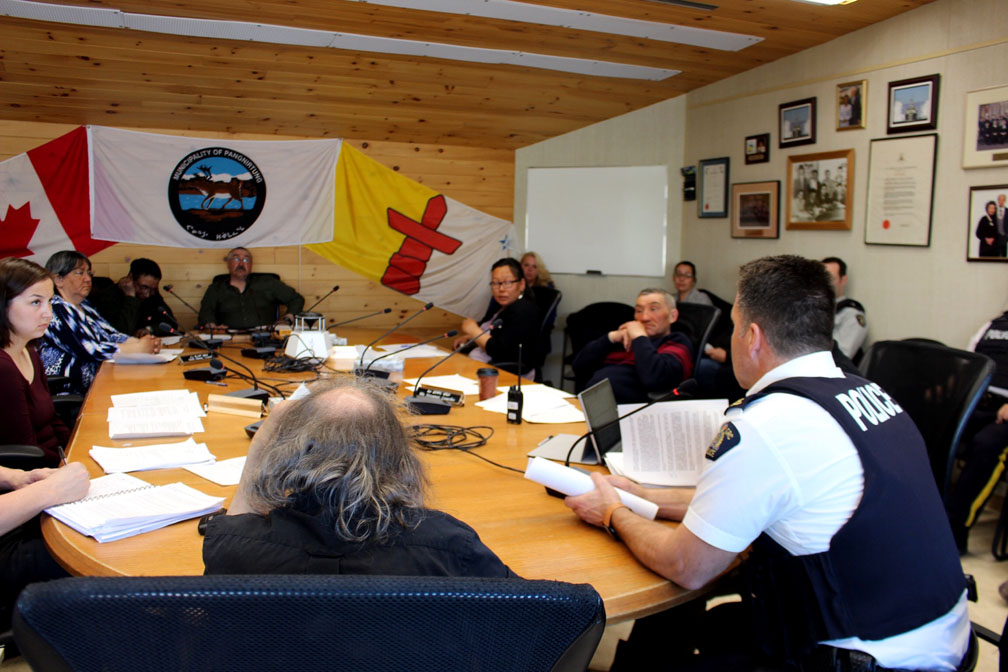 Civil servants from the Nunavut government, along with RCMP representatives, met with hamlet representatives in Pangnirtung last night. The hamlet has developed a five-year “urgency plan” aimed at reducing violence and suicide. (PHOTO BY BETH BROWN)

PANGNIRTUNG—Pangnirtung’s hamlet council is looking for lasting ways to stop reoccurring violence and suicide attempts made by youth in the Baffin community—but Nunavut’s RCMP chief says that crime-wise, the community’s struggle is nothing that police can’t handle.

“Crime has increased … but it’s not a crisis,” Nunavut’s RCMP commanding officer, Chief Supt. Mike Jeffrey, told the Pangnirtung hamlet council and members of the public during a special meeting of council held in hamlet chambers on Tuesday, May 22.

Jeffrey’s visit to Pangnirtung—along with Government of Nunavut officials from the Department of Justice and the offices of mental health and poverty reduction—came after the council sent a letter to the GN in April, demanding more support for their community.

Over the weekend, there was a stabbing in the Pangnirtung co-op store.

“It is something that can be managed by the RCMP with the current number of officers that we do have in your community,” Jeffrey said. “Your community is like other communities in Nunavut, where the crime is increasing slightly, in this community in particular over the last three years.”

In February, a dozen youth are known to have attempted suicide within two weeks. In February and March, calls made to a poison control centre in the south were higher in Pangnirtung than in any other Nunavut community. In April there was a death by suicide, after the community saw no suicides in 2017.

Pangnirtung MLA Margaret Nakashuk said the first attempt she heard about was made by a 12-year-old child.

“Some people might say we are not in an urgent situation,” Nakashuk said, adding that Nunavut’s minister of health has responded by saying many communities in Nunavut have similar struggles

“We know that our community is not a big city,” Nakashuk said. “Here in Pangnirtung we need support like there is support in the South.”

Because everyone in Pangnirtung knows each other, the whole community feels the hardships of one person, Nakashuk said. Often, she sees hungry children, and people call her asking if there is any food in the house.

Nunavut’s RCMP are asking for one more officer in Pangnirtung. Last year, nine new RCMP positions were established in Nunavut, but those staff are all assigned to other communities.

Jeffrey did say there will be a full-time administrative position filled this year at the Pangnirtung RCMP detachment by a local and Inuktitut-speaking person.

Right now, the three RCMP officers on the ground in Pangnirtung rely on volunteers, bylaw officers and interpreters from the health centre to help them communicate with unilingual clients.

English is not the first language of most residents in Pangnirtung, where the population is about 1,600.

The hamlet’s economic development officer, Eric Lawlor, said there are no translators for calls made by unilingual residents to the health centre after hours.

“It’s not the Inuit way,” Coun. Jaco Ishulutak said of alcohol abuse and violence in the community. He said a lack of language services puts elders at risk.

The hamlet had asked that police do airport checks for alcohol coming into Pangnirtung, but Jeffrey said this just isn’t legal unless the RCMP has a reported reason to search certain bags.

“I believe that alcohol abuse and binge drinking is a problem in the community,” he said. “Having things for people to do other than drinking is very important. The communities that do the best are the one that have a lot of activities,” like fishing derbies, he said.

There were 274 calls for service to the RCMP in Pangnirtung from January 1 to April 1. That’s 30 calls more than this time last year. A 16 per cent increase in crime has been seen over five years in the community.

Working out a working group

As expected by hamlet councillors, the Department of Justice proposed a working group of community members and government departments be formed in Pangnirtung to see what is working and what isn’t.

The GN will check in on that group in six months, and again in one year.

This winter, the hamlet council consulted with families, elders and youth to build a five-year “urgency plan” that will look to root out violence and suicide.

“The intervention plan, it would be community-led. We’ll be following their lead,” Riita Strickland, Nunavut’s assistant deputy minister of justice, told Nunatsiaq News.

To the council she said, “Your dedication and passion as a community is appreciated at the territorial level.”

Strickland also reminded attendees that during the daytime, people can always contact their community justice outreach worker if they need help getting out of an abusive situation.

“Does the justice rep in town have a phone yet?” asked Pangnirtung’s senior administrative officer, Ron Ladd.

The justice worker in Pangnirtung hasn’t had a phone in her office since October, and won’t until the sealift can bring in a new phone line. No cell phone has been given to that person, hamlet representatives said.

Because addictions treatment is done outside of Nunavut, setting up the right treatment does take time, said Victoria Madsen, Nunavut’s director of mental health.

Madsen urged people to visit their mental health nurse at their local health centre, saying that help is available. In May, a trauma team visited Pangnirtung.

“We try very hard to have one-on-one treatment plans,” she said.

Building confidence on the ground

“We have heard about the many different services that are provided by government, but our community is struggling,” said Coun. Markus Wilcke.

He called government support services “fragmented” and said that community services are not “integrated” with government.

One person from a small community may have to work with many government groups to get the mental health or addictions help they need, he said.

People need to feel confident that they are being taken care of, Wilcke said.

“You have the resources, where are they? They need to come,” community delegate Nancy Anilniliak said to the GN visitors. “We only try to be proactive when something happens—when there is a death.”

She said she was disappointed not to see representatives at the meeting from the Nunavut Housing Corp.

The hamlet wants to open an emergency shelter with response services for mental health and violence. It’s asking the GN if it can use a closed-down health centre for this purpose.

Other GN departments have until May 31 to say if they want that building, before the Department of Community and Government Services can consider the building surplus. The building would first be assessed for mould, asbestos and structural integrity.

The community wants to see its youth centre open again, and soon. That building is now being used as a soup kitchen three days each week.

On Monday at their regular meeting, councillors will move to start up this new working group.

“Even though our meeting has ended, the situation we are in will not stop,” said Deputy Mayor David Kooneeliusie.