“I’ve had coffins in the grave that were floating” 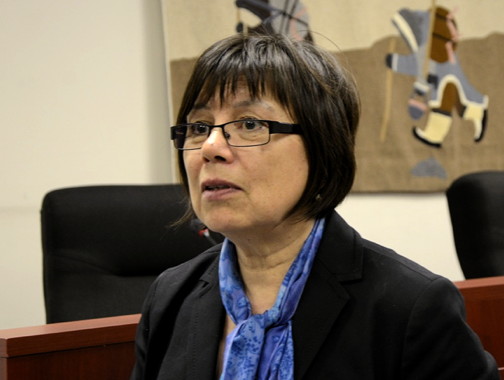 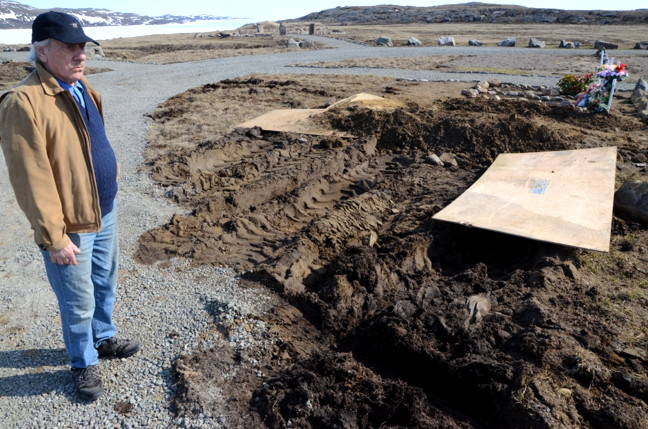 Bryan Pearson surveys the chewed up ground next to three recent burials at Iqaluit’s new cemetery in Apex. (PHOTO BY DAVID MURPHY)

A coffin floating in a watery grave at a funeral in Iqaluit’s new cemetery was the result of a communication error, mayor Mary Wilman told reporters June 12.

Someone complained to the City of Iqaluit recently that water had pooled in a grave pit and that this disrupted a funeral.

Apparently the undertaker, Jacob Gebara, put the coffin into a burial plot for a funeral service, but there was too much water in the grave.

“As I understand it, they took the body to be interred. And they tried to do what they could,” said director of public works, Matthew Hamp who, along with Wilman, held a news conference at city hall June 12.

When the undertaker realized there was too much water to bury the coffin, “they called public works to come down and help them,” Hamp said.

“The undertaker maybe assumed that he had to manage that himself,” Wilman said.

This disrupted the funeral ceremonies, and Wilman offered an apology from the city.

Wilman said she couldn’t remember off hand the name of the person who complained about the flooded grave, but she sent the family an apology letter.

“I would like to extend my sincere apologies to the family in concern. I did try to get hold of the mother, and I left a message for her to contact me,” Wilman said.

Wilman said the next step is for public works and the undertaker “to clarify roles and responsibilities” so the problem doesn’t happen again.

“It is critical for the undertaker to give us a well advanced notice,” Wilman said.

Wilman said it would be ideal if the undertaker could give public works — the department responsible for digging graves — a few days notice before a burial is scheduled to take place.

Hamp said if the site is dug the day before, public works could pump out excess water the next morning, before the funeral.

But watery graves and floating coffins are not new in Iqaluit, according to former undertaker Bryan Pearson. It’s spring, and when everything starts to thaw, there’s naturally more water in the ground.

“This is the Arctic,” Pearson said.

“I’ve had coffins in the grave that were floating. And I’ve piled rocks on them to sink them,” Pearson said.

“When I buried [Jimmy] Flash Kilabuk, the grave was full of water. So I put milk crates on the bottom of the grave so we could sit the coffin on the milk crates without it being in the water. And then we filled it in.”

Pearson said he’s more concerned about the soil in the graveyard, anyways.

Taking a stroll through the new, roughly $1.33-million graveyard in Apex, Pearson shakes his head at a mud pit next to, and behind, the only three occupied burial plots in the cemetery.

The heavy equipment used to dig graves makes the cemetery unsightly, he said.

“See what happens when you put in heavy equipment when you dig this grave, that’s what you get,” Pearson said, pointing to muddy, chewed up ground.

“That’s torn up because the bulldozer, the front-end loader, chews up the tundra. And it makes this bloody mess.”

Wilman, however, maintains the site is perfect — and there was “absolutely” soil testing at the new cemetery site.

“We took our time in studying the site, which is now the new site,” Wilman said. And Hamp added that the cemetery’s drainage is fine.

The mayor warned that flooded graves will likely be a reoccurring problem for the first few months of spring every year.

But next year, she added, the city will be prepared for potential problems like this.

“It’s a tragedy that no one really anticipated. We don’t anticipate something like this. We only plan that things will be to the best,” Wilman said.

“So no, I think no one anticipated this would happen. Other than to say all of us are aware of our winter, there’s thawing.”

Wilman said the city should come up with a new procedure to ensure grave sites aren’t flooded in the future.

“This year is a trial period. This month actually is the trial period. It being a new site, we know what we’re up against. So we’ll be prepared to get it ready.”