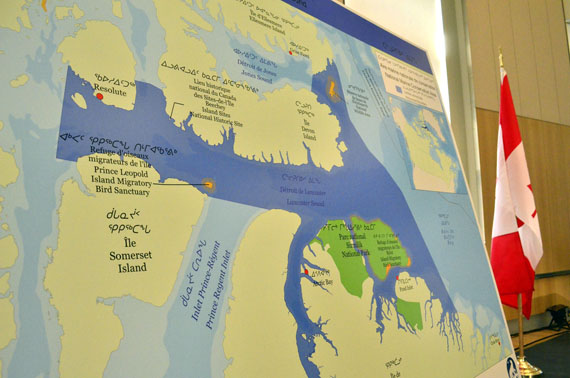 In a deal that delivers big wins to each side, the Qikiqtani Inuit Association and the federal government declared Aug. 14 that they’ve reached an agreement on new, expanded boundaries for the long-awaited Tallurutiup Imanga Lancaster Sound marine protected area.

The deal, which expands the protected area’s territory to include about 8,600 square kilometres once covered by about 30 oil and gas leases relinquished by Shell Canada last year, as a well as the waters of Admiralty Inlet and an area south of Cornwallis Island, clears the way for negotiation of an Inuit Impact and Benefit Agreement.

“Today is a very significant day for Inuit as well as for the world,” P.J. Akeeagok, the president of the Qikiqtani Inuit Association, said Aug. 14 at a web-streamed ceremony in Pond Inlet.

For Canada’s Liberal government, the deal gives them the ability to brag that they’re moving closer to their promised goal of increasing the size of the country’s marine protected waters to five per cent in 2017, scoring political points with environmentalists.

For the QIA, it moves Inuit towards a long sought-after goal: a permanent ban on oil and gas exploration in and around Lancaster Sound, with guaranteed harvesting rights and other benefits.

Inuit living in the North Baffin region have, since the 1970s, sought protection for the area, whose rich ecosystem sustains large populations of narwhal, beluga, bowhead whales, seals, walrus, polar bear and other creatures, as well as large flocks of migratory sea birds.

“That has sustained us since time immemorial,” Akeeagok said.

But Inuit in the region stand to benefit in other ways from the IIBA, he said, including the creation of better transport infrastructure in the region, such as small craft harbours and even an improved airport at Pond Inlet.

“For years, we have asked for more ports and small craft harbours,” he said.

To make that happen, these IIBA talks will take a “whole of government” approach, a first for negotiations between Inuit and government on an IIBA for a protected area.

That means the QIA would negotiate not only with Parks Canada, but with a variety of other federal departments, likely Transport Canada, Fisheries and Oceans, Indigenous and Northern Affairs Canada and other entities.

Stephen Williamson-Bathory, the director of special projects at the QIA, said in a technical briefing that an interim management plan for the area would be in place until the IIBA is completed.

And as a gesture of reconciliation, Akeeagok asked that media use the agreed-upon Inuktitut name for Lancaster Sound: Tallurutiup Imanga.

“I want to ask you to use our words that tell our stories when referring to this body of water,” Akeeagok said.

“Today in the spirit of reconciliation I think we can do better,” he said.

“Tallurutiup,” the Inuktitut term for Devon Island, represents the idea of a woman’s chin with tattoo marks, likely a reference to the appearance of certain streaks on the land. “Imanga” means a body of water.

Until recently, the QIA used the term “Tallurutiup Tariunga” to represent Lancaster Sound, but Williamson-Bathory said the QIA, following consultation with people in nearby communities, now prefers Tallurutiup Imanga.

“It is their vision that has brought us here,” he said.

Catherine McKenna, the federal environment minister, who thanked the people of Pond Inlet for welcoming her to their community, praised the Inuit who worked on creating the protected area.

“There really has been tireless work and a real partnership,” McKenna said.

She also stressed the importance of combatting climate change, saying her visit to the Arctic has reminded her of the impact of climate change on northern peoples.

“We know climate change is real and happening in the Arctic,” she said.

Joe Savikataaq, the Nunavut environment minister, said the Government of Nunavut, “is pleased with the considerable support for this initiative from the communities.”

“It’s a very large area and everyone is in agreement on the size,” Savikataaq said.

Young people visiting Pond Inlet on the C3 vessel as part of the Students on Ice program attended the event, and organizers used a C3 live Facebook video to broadcast it to a group gathered at the Canadian Museum of Nature in Ottawa.

But participants got a reminder of Nunavut’s poor internet services when the highly pixelated video feed stalled and cut out part-way through McKenna’s speech.

Paul Crowley, the World Wildlife Fund-Canada’s vice president of Arctic conservation, said his organization is pleased with the boundaries agreement between QIA and the federal government.

“It’s all positive for us. We’ve been asking for the region to be protected from oil and gas exploration and it’s interesting that the issue has come full circle with the recent decision of the Supreme Court of Canada on the Clyde River case, with protection for this region finally coming about,” Crowley said.