Centre expected to open in 2020 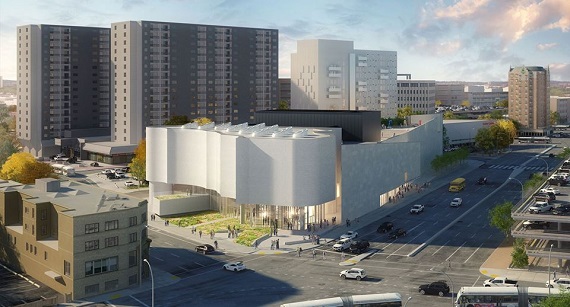 Construction will soon begin on the Winnipeg Art Gallery’s new Inuit Art Centre, pictured here in this artist’s renderinig. The centre is set to open in 2020. (IMAGE COURTESY OF WAG/MICHAEL MALTZAN ARCHITECTURE)

The Winnipeg Art Gallery is set to break ground on its much-anticipated Inuit-focused art centre.

Plans are underway to build a 3,700-square-metre, $65-million Inuit art centre adjacent to the gallery in downtown Winnipeg, just a short walk from the Manitoba legislative building.

The gallery will host a groundbreaking event on Friday, May 25 with municipal, provincial and Indigenous officials on hand, including former Nunavut Commissioner Piita Irniq and Rankin Inlet hamlet councillor Theresie Tungilik, who are members of the gallery’s Indigenous circle.

The Inuit art centre will serve as the largest public collection of contemporary Inuit art in the world, with much of the collection from Nunavut.

As part of a deal struck in 2015, the governments of Nunavut and Manitoba agreed to spend $1 million to move more than 7,000 pieces of Inuit art—much of which have been in storage for years—to the gallery.

Those pieces will eventually be returned to Nunavut when the territory builds its own heritage centre in Iqaluit.

In the meantime, plans are underway to construct a new building featuring a massive glass atrium, where a three-storey transparent vault will showcase 7,500 Inuit carvings.

The centre’s theatre is being designed to feature live performers, educators, speakers and elders.

In conjunction with the groundbreaking, the Winnipeg Art Gallery will present an exhibition of work by Labrador Inuit called SakKijâjuk: Art and Craft from Nunatsiavut, which will run at the gallery until Oct. 14.