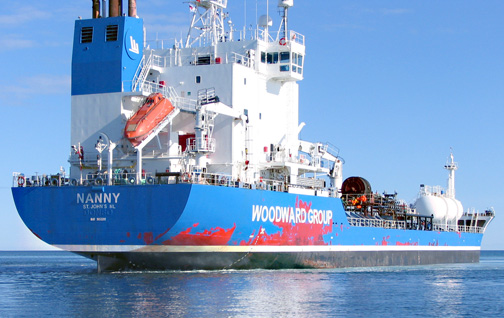 No oil is leaking from a fuel tanker that ran aground near Gjoa Haven, Coast Guard officials said Sept. 2.

The vessel, the Nanny, operated by Woodward’s Oil, is stuck about 30 kilometres from Gjoa Haven, said Larry Trigatti, the Coast Guard’s superintendent of environmental response for the Arctic.

“There is no damage reported on the vessel, there is no water entering the vessel, the crew is safe and we are working with Transport Canada and the vessel owners to determine a safe course of action,” Trigatti said. He was not able to say what the ship is stuck on.

Trigatti said crew from the Canadian Coast Guard Ship Henry Larsen and Transport Canada officials flew over the scene and spotted nothing leaking from the ship.

Woodward’s was working late Sept. 2 on a plan to get the ship floating again. Trigatti said that would likely be done by shifting or unloading cargo until the ship is free.

A spokeswoman at Nunavut’s environment department said the territorial government has no regulatory role in the operation, but has staff “observing and taking pictures because obviously we’re interested.”

A Transport Canada inspection record shows the Nanny was cited for deficiencies in “stability, structure and related equipment” in 1998.

No one from Woodward’s-owned Coastal Shipping Limited, which operates fuel resupply shipments to Nunavut, was available to comment late Sept. 2.

The Nanny is the third ship to run aground in Nunavut waters in the last month. Another Woodward’s tanker, the Mokami ran aground near Pangnirtung in early August, though no oil leaked into the environment during that incident.

And on Aug. 27, the cruise ship Clipper Adventurer got stuck on an uncharted rock in three metres of water near Kugluktuk, forcing the evacuation of 120 passengers. No one was hurt.