“These programs represent a fear that force will be needed” 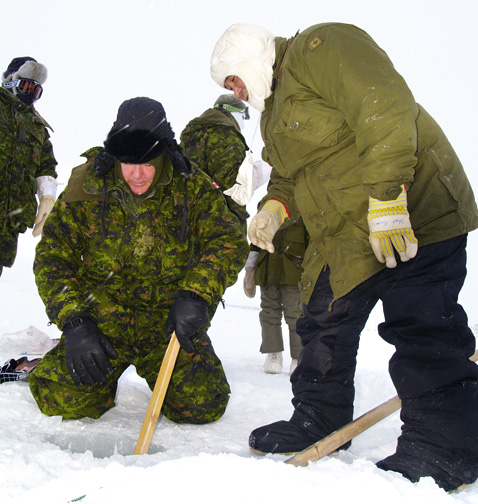 A Canadian Ranger, right, helps a member of the Canadian Forces, left, how to dig a hole for ice fishing in Gjoa Haven in April, 2009. A new study says increased military activity in the Arctic could trigger an arms race in the region. (PHOTO BY CHRIS WINDEYER)

Polar nations might talk of peace and cooperation, but they’re also building their abilities to wage war in the Arctic, says a new study from the Canadian Defense and Foreign Affairs Institute.

All five countries with Arctic coastlines are expanding their military and patrol capabilities in the region, writes Rob Huebert, a political scientist at the University of Calgary.

Mistrust of Russia’s polar ambitions on the part of Canada, the United States, Denmark and especially Norway, runs the risk of turning into a full-blown arms race, Huebert writes.

“The resources that are being expended on these new forces exceed what a simply prudent ‘insurance policy’ of military force should warrant…These programs represent a fear that force will be needed to protect [Arctic countries’] interests in the region and that they need to be prepared for this.”

Huebert’s paper breaks down how Canada’s four polar rivals are building up their armed forces in the Arctic:

• Russia has built 10 new submarines since 1993, with five more nuclear powered attack subs on the way;
• Norway, which has a boundary dispute with Russia in the Berents Sea, has built 16 naval ships, some of which are armed;
• Denmark since 1988 has built 21 ships for its navy, all armed and some able to sail through first-year sea ice;
• the U.S. has built six nuclear-powered attack submarines since 1989, with six more under construction and a further 12 planned.

Canada, meanwhile is planning to build between six and eight Arctic patrol ships and one polar icebreaker to replace the aging Louis St. Laurent.

Huebert notes that there’s little in the way of progress on those projects, although a procurement page on the Canadian Forces’ website says a contract for the patrol ships is slated to go out this coming August.

But while it may lag behind other polar states in acquiring new military hardware, Canada is still expanding its military infrastructure North of 60. The Canadian Forces are building a winter warfare training school in Resolute Bay and a construction on a deepwater port at Nanisivik is supposed to begin this summer.

The Nanisivik port is supposed to be ready in time to host the Arctic patrol ships, which are, on paper at least, to enter service in 2014, Huebert writes.

And the forces also run three sovereignty operations in the Arctic: Nunalivut on Ellesmere Island starting April 6, Nanook, on Baffin Island during August, and Nunakput, in the Mackenzie Delta region, from July to September.

This year’s version of Operation Nunalivut will include, for the first time, Danish soldiers from the Sirius Patrol Team, which operates over a massive swath of Northern Greenland.

The inclusion of Denmark in a Canadian sovereignty operation serves as a “subtle message” to Russia that Western countries will cooperate against Russia if need be, Huebert said in an interview.

Some observers see Russia as the most aggressive in pursuing control and development in its Arctic region. Moves like the 2008 planting of a Russian flag on the sea floor at the North Pole drew a backlash in the West, especially from Canada.

But in his study, Huebert is quick to point out that conflict in the Arctic would be a disaster for everyone.

Huebert is concerned each act of military expansion inspires another one in response, creating a self-fulfilling arms race. That’s why Huebert calls for an end to the ban on discussing security issues at the eight-member Arctic Council.

Canada retakes the chairmanship of the Arctic Council in 2010, and Huebert writes that Ottawa should use its term to improve Arctic diplomacy between Western countries and Russia.