“The plans that you make can change completely” 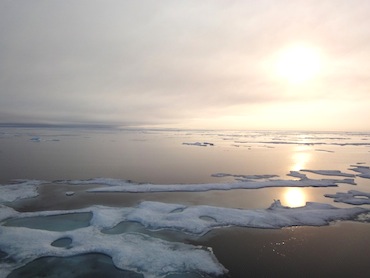 Ice conditions in the Northwest Passage change quickly. After plowing through heavy, multi-year ice for most of the day on Aug. 9, by evening the Amundsen moves quickly easily navigable, thin ice. (PHOTO BY JANE GEORGE) 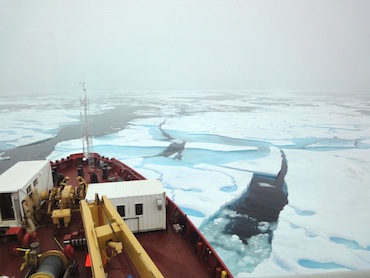 The Amundsen attacks large ridges of ice by slamming into them until they crack. (PHOTO BY JANE GEORGE) 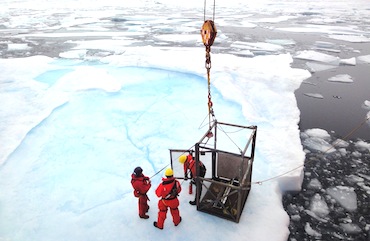 While the Amundsen is travelling in heavy multi-year ice on the afternoon of Aug. 9, the icebreaker stops to sample the ice. Three researchers are let down in a metal box to an ice pan in the Larsen Sound where they drill an ice core which will provide information, among other things, about the ice temperature. (PHOTO BY JANE GEORGE)

ON BOARD THE AMUNDSEN —Stéphane Julien, captain of the Coast Guard icebreaker, the Amundsen, and his crew on the bridge know their ice.

And as the Amundsen travels through the Northwest Passage, they constantly scan the ice ahead of the ship, looking for the best passage.

Julien, 48, is veteran of the Northwest Passage, having completed seven successful crossings.

It’s getting easier to sail through the passage, where ice once stopped ships in their tracks at this time of year, he says.

On the evening of Aug. 8, the Amundsen finds itself surrounded by easily navigable first-year ice south of Cornwallis Island, after having traveled through some thick turquoise-coloured multi-year ice earlier in the day.

The ocean is calm, marked only by the passing of seals and six polar bears travelling through the ice in search of food.

With little ice to block its way, the Amundsen travels at up to 14 knots (25 kilometres an hour), using only two of its six powerful propellers.

That’s much faster than the ship can go in thick, multi-year ice when it slows down as it crashes into the ice to create a path.

The morning of Aug. 9 brings heavy ice, and the Amundsen slows down to two knots.

As the ship approaches a ridge, the bow hits the ice, rises up and then falls back. It takes three tries to cross the ridge before it cracks into huge chunks. Many more ridges lie ahead.

To break this ice, the ship relies on the sheer force of its weight— and the power of a steel “ice knife” attached to the reinforced hull to cut through the ice.

If these don’t do the job, sometimes an icebreaker will turn around. Then its propellers churn up the water with such force that the ice above gets chopped up.

While surrounded by multi-year ice, the Amundsen stops to take a core of ice for study. A winch on the front deck drops three researchers in a metal basket on to a pan of multi-year ice where they use an auger to drill up a core.

And, according to Environment Canada’s ice service, ice conditions in the Northwest Passage at the end of July resembled those normally found in the second or third week of August.

Air temperatures were also above normal throughout last year’s September to December freeze-up period, averaging from 1 to 5 C warmer over the central Arctic.

The impact of this unusual warmth is still felt this month when ice, except for a few places in the passage, is lighter than usual.

This fall, Julien will be able to provide his feedback on this year’s ice conditions.

That’s important because satellite-generated maps of ice aren’t always accurate, say officers on the bridge. Sometimes the wind and currents can also push the ice away, so where the map says there should be ice, there isn’t any. And satellites can see where there’s ice, but not how thick it is.

This week, the Amundsen is due in Kugluktuk on Aug. 12. Nearly 80 crew and scientists on board will leave the ship and about 80 more people will embark.

The Amundsen aims to meet that date.

Still, to get there in time, André Rochon, the senior scientist of this leg of the Amundsen’s 2010 voyage, has had to constantly rearrange researchers’ schedules and cancel some sampling activities.

“The plans that you make can change completely,” he says.

This uncertainty, delay, liability, increased insurance and other costs of using the Northwest Passage are likely to deter commercial shipping here.

A ship with a reinforced hull could possibly make it intact through the passage. But if it got stuck, it would cost thousands of dollars for an icebreaker like the Amundsen to come to the rescue.

So even if the Northwest Passage is less ice-choked than before, the route may not become a shipping short-cut in the near future, as some have predicted.