Canada’s Arctic, a hotspot for earthquakes

Scientists see a link between warming and earthquakes 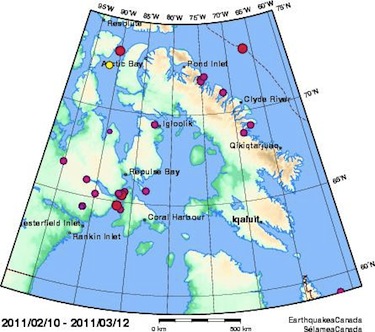 This image shows where there have been earthquakes in Nunavut and Nunavik over the past month. (IMAGE/NRCAN)

In the aftermath of March 11’s devastating earthquake and tsunami in Japan, some are already asking if there’s a link between earthquakes and climate change.

In the polar regions, scientists have noted that earthquakes are on the rise, and that some of these may be associated with global warming.

That’s because the pressure of glaciers suppresses earthquakes, so when this ice melts, the pressure release can trigger earthquakes in a movement known as postglacial rebound.

Over the past 80 years, about 2,000 earthquakes have been recorded in Nunavut.

Most are of these have been minor, falling below a magnitude of 4.0 on the Richter scale. These light earthquakes may make a low rumbling noise, but they produce little movement of the ground.

On April 3, 1999 — three days after the creation of the territory, Nunavut saw its first ever earthquake, according to Natural Resources Canada. It wasn’t the first in the territory, but it was the first recorded earthquake after Nunavut officially became Canada’s newest territory.

The last earthquake, which was actually felt in Nunavut, occurred on Dec. 4, 2010, 137 kilometres north of Baker Lake.

The force of this Dec. 4 quake was of a magnitude of 4.6 on the Richter scale that’s used to measure the force of earthquakes — much less than Friday’s jolt of a 8.9 magnitude off Japan.

But Nunavut and northern Nunavik,where a 2006 earthquake of 4.0 magnitude shook Puvirnituq, are among the most earthquake-prone zones in Canada.

According to data gathered by the Geological Survey of Canada, the northeast coast of Baffin Island and the High Arctic islands have a particularly high incidence of earthquakes.

This past month saw 17 light earthquakes in Nunavut — and, since the beginning of the year, there have been about 40 earthquakes, including three near Salluit, according to data from Natural Resources Canada.

In nearby Greenland, the annual number of glacial earthquakes is rising, a study from 2006 shows.

The seismologists also found that the earthquakes occurred mainly during the summer months, which suggested these movements were associated with rapidly melting ice.

In the past, there have been strong earthquakes recorded in Canada’s North.

On Nov. 20, 1933, a monster earthquake ripped through the sea-floor of Baffin Bay, not far offshore from Pond Inlet. Seismologists believe its magnitude measured 7.3 on the Richter scale. A quake that powerful can hurl people to the ground, shake buildings apart, set off landslides and trigger giant tidal waves, as was seen in Japan.

In 1989, on Nunavik’s Ungava peninsula, an earthquake of 6.3 magnitude tore open the tundra and shook up surrounding communities. The earthquake shattered stone, partially drained one lake, and created a new lake where none had existed before.

So, can we expect to see more earthquakes in Canada’s Arctic? Yes, said Bill McGuire in a 2006 article in the New Scientist, called “Climate change: Tearing the Earth apart?”

“Dumping the weight of a kilometer-thick ice sheet onto a continent or removing a deep column of water from the ocean floor will inevitably affect the stresses and strains on the underlying rock,” he said. “[While] not every volcanic eruption and earthquake in the years to come will have a climate-change link… [But as] the century progresses we should not be surprised by more geological disasters as a direct and indirect result of dramatic changes to our environment.”

You can see if the ground is moving in Nunavut, by checking out a link on the Natural Resources Canada website. 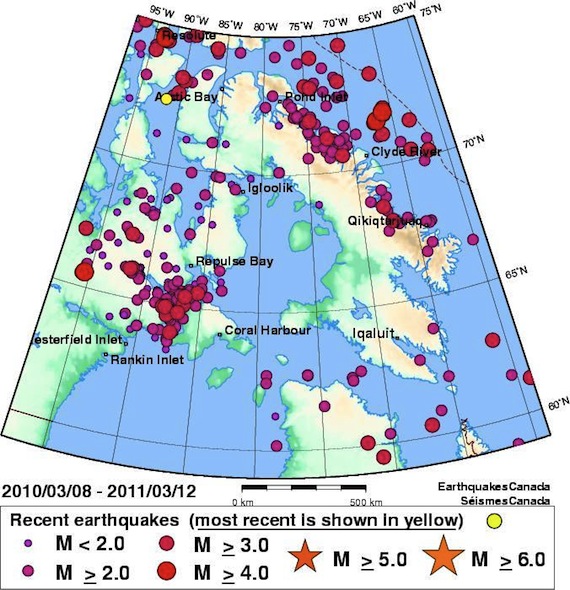 Did you feel the ground move? This image shows where there have been earthquakes in Nunavut and Nunavik over the past 12 months. (IMAGE/NRCAN)