Nunavik on track for 80 per cent vaccination rate 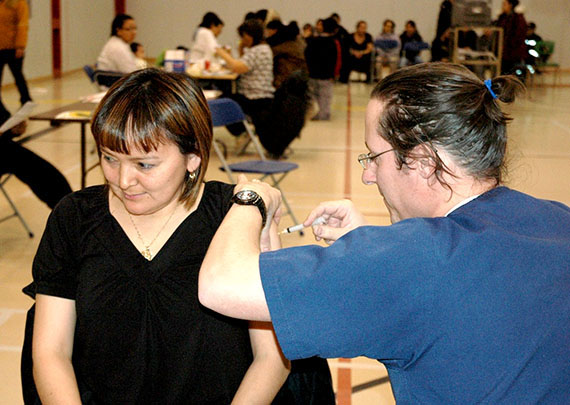 KANGIQSUJUAQ — Late in the evening of Nov. 4 in Kangiqsujuaq’s school gymnasium, a team of tired nurses injected the final stragglers with the H1N1 vaccine.

Richard Venne, a registered nurse in Kangiqsujuaq, said he and his colleagues went through the 550 doses that were sent to the community.

Another batch of vaccines is expected soon to vaccinate anyone who missed last week’s clinic, he said.

That’s just one community, but health officials in Nunanvik say they are close to achieving their goal of vaccinating more than three-quarters of the region’s residents against the H1N1 virus.

Nunavik’s mass immunization clinics have wrapped up in all but a handful of Hudson Bay communities.

So, public health officials say they won’t have an exact picture of the overall vaccination rate until next week.

“What we can see now is that the acceptance was quite high,” said Serge Déry, Nunavik’s public health director. “We’re quite confident that we’ll achieve our goal of 80 per cent.”

In comparison, only 19 per cent of people in the rest of Canada would have received the vaccine by the end of last week.

Once 75 to 80 per cent of a population has been vaccinated, the virus can no longer travel freely.

Nunavik’s vaccine rollout went smoothly, with only one report of a reaction to the vaccine, Déry said.

One woman was reported to have begun vomiting a few hours
after receiving the vaccine, but she was treated at her local nursing station and sent home.

As of late last week, Nunavik was still keep watching on six cases of the virus in Kuujjuarapik as well as a newly-confirmed case in Inukjuak, Déry said.

Nunavik did not receive enough vaccine doses to vaccinate its entire population, because a 100 per cent response was not anticipated.

But Déry said he doesn’t expect to see shortages.

Communities that used fewer doses of the vaccine than provided are expected to re-allocate them to neighbouring communities in need, he said.

Nunavik was also expected to receive doses of the non-adjuvanted vaccine Nov. 6. These vaccines don’t contain a substance generally used to boost the vaccine’s effectiveness and are thought to be safer for pregnant women.

However, pregnant women in Nunavik were recommended to take the adjuvanted vaccine right away in the absence of the non-adjuvanted one, because they are considered to be at a higher risk of contracting the virus.

It’s not yet clear whether children will need a booster vaccine short, although Health Canada may determine children between six months and nine years will need to receive another dose of the vaccine at least 21 days after the first.

A child’s dose is about half an adult dose.