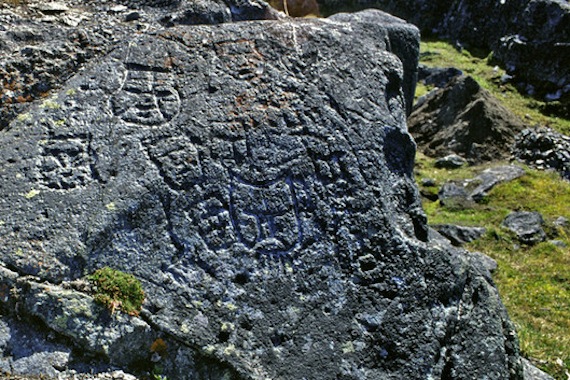 The rock carvings of Qajartalik are located on a slim, rock island located near Kangiqsujuaq on Nunavik’s Hudson Strait. (PHOTO/AVATAQ CULTURAL INSTITUTE)

That’s how long Nunavik’s Avataq Cultural Institute has waited for the federal government to recognize the rock carvings on the island of Qajartalik near Kangiqsujuaq as a site of national and historic significance.

Due to the isolated, wind-swept location of Qajartalik and the fragility of the carvings, Qajartalik needs protection — and soon, said Avataq’s head archaeologist Daniel Gendron.

Protection is especially important as cultural tourism develops in the area, he added.

From a distance, the rocky island of Qajartalik looks like a dark strip of soapstone. On its 120-metre-long kayak-shaped ridge, lichens camouflage what some have dubbed “devil’s faces.”

There are 170 of the faces, carved into the outcrop’s soft soapstone. Precise methods were used in their production, and most are symmetrical.

In shape, these etchings resemble the tiny carved masks that archeologists associate with the Dorset, or Tuniit, culture, believed to have flourished in the Eastern Arctic about 1,000 years ago.

Some display cat-like features and appear to have horns. Lines radiate from many of the mouths, perhaps symbolizing the breath of a shaman.

In 1997, Avataq applied to the Historic Sites and Monuments Board of Canada to have Qajartalik designated as a national historic site.

But Avataq’s submission was shelved because talks about whether the island belonged to Nunavut or Nunavik were underway, Gendron said.

In 2008, once Nunavik’s offshore agreement officially transferred the island to Nunavik, Avataq re-submitted the application.

However, over past two decades, Qajartalik has noticeably deteriorated, due to natural causes. In 2006, officials heard allegations of vandalism committed that year.

But when archeologists examined the site in 2007, they did not find any new damage to the engraved masks. They continue to monitor the site, because the soapstone outcrops on which the engravings are made are vulnerable to natural elements.

Gendron said he hopes the federal government will now act because the site is endangered.

Parks Canada historians are now looking at the application. Once they finish their review, the historic sites board will take a look at the file. This board will then make a recommendation to the minister responsible for Parks Canada.

But, Parks Canada warns this process could take several years.

Avataq wants the report on the table during a spring meeting of the historic sites board, Gendron said.

If approved, not much would physically change at Qajartalik — besides the addition of a plaque — but that it’s the first step to gaining the site more protection under the United Nations Educational, Scientific and Cultural Organization, he said.

“Because of the fragility of the site, we thought of turning to UNESCO, but it first has to be recognized by its own country,” he said. “Parks Canada would have to present [Qajartalik] to UNESCO, and that may take several years.”

Money, attention and protection: these are among the benefits of being a World Heritage site, which can be seen in Alta, a city in the far north of Norway at about the same latitude as Clyde River in Nunavut.

There, several thousand rock carvings, some of them more than 6,000 years old, have been on the World Heritage list since 1985.

This listing has opened doors to new money and global publicity. Now thousands of people from all over the world come to Alta, far above the Arctic Circle, to see the rock carvings and visit the interpretation centre. At the same time, strict laws protect the rock carvings.

Neither Nunavut nor Nunavik have any sites on the World Heritage list, but in 2010, there were 911 of them around the world.

In the meantime, an increasing number of cruise ships want to include more accessible Qajartalik as one of their stops.

This makes it more urgent to reach a balance between protecting the site and helping to develop cultural tourism in the area, Gendron said.

“We don’t want to ban tourism,” he said. “But given that it’s a fragile site, we’re aiming for small groups of eight to 10 people at a time. That’s feasible.”

There’s also another smaller rock carving site in the area known as Upirngivik, which could be home to about a dozen carvings similar to those found at Qajartalik. 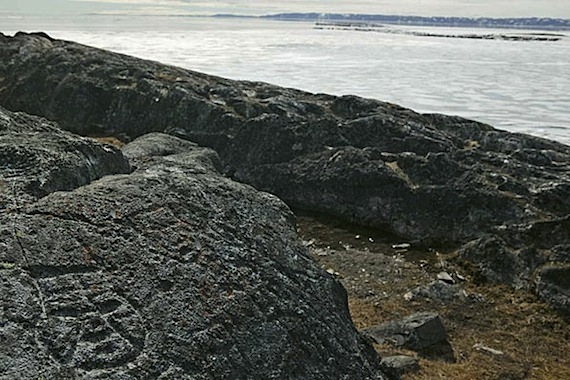 The increasing traffic and deterioration on the remote island of Qajartalik is prompting Nunavik’s Avataq Cultural Institute to seek protection for the site. (PHOTO/PARCS NUNAVIK)